A single mother who spent £16,000 undergoing IVF treatments has compared choosing a donor at a sperm bank to ‘shopping at Waitrose’.

Stacey Forde, 39, from Cardiff, Wales, started researching IVF in Denmark in 2018 after the breakdown of two relationships and in 2021, began looking up a sperm bank where she chose the traits she wanted in a father.

She said picking attributes for her child to like filling a shopping cart – and revealed she was given a choice of hair and eye colour, height, hobbies and academic achievement of a donor.

The NHS worker, who paid £1,200 for the sperm alone, said the sperm bank also offered the chance to pay more to see pictures of the donor as an adult – but she opted for images as a child.

Stacey says she couldn’t afford the ‘lawyer’ donor option so went for a student who was six foot with blue eyes, revealing her son Aksel Forde, was born on May 4 2022. 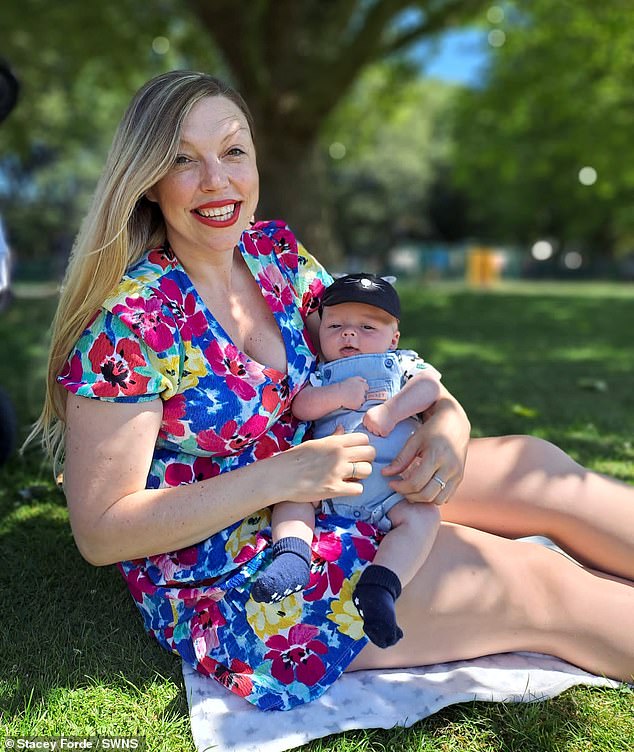 Stacey had previously been in a relationship for two years and the couple had planned to start trying for a baby – however the relationship ended.

Following another relationship which didn’t lead to parenthood, she decided to look into IVF in 2018 and underwent a ‘fertility MOT’ in Denmark.

Sadly, her first attempt in 2020 didn’t work and left her feeling dispirited due to the high costs and amount of time that had gone into preparing.

After waiting for nearly a year, she decided to try again and after looking up a sperm bank in London called European Sperm Bank, she chose the traits she wanted in a father.

The bank offers clients the chance to buy sperm online and ship the specimen across the continent. 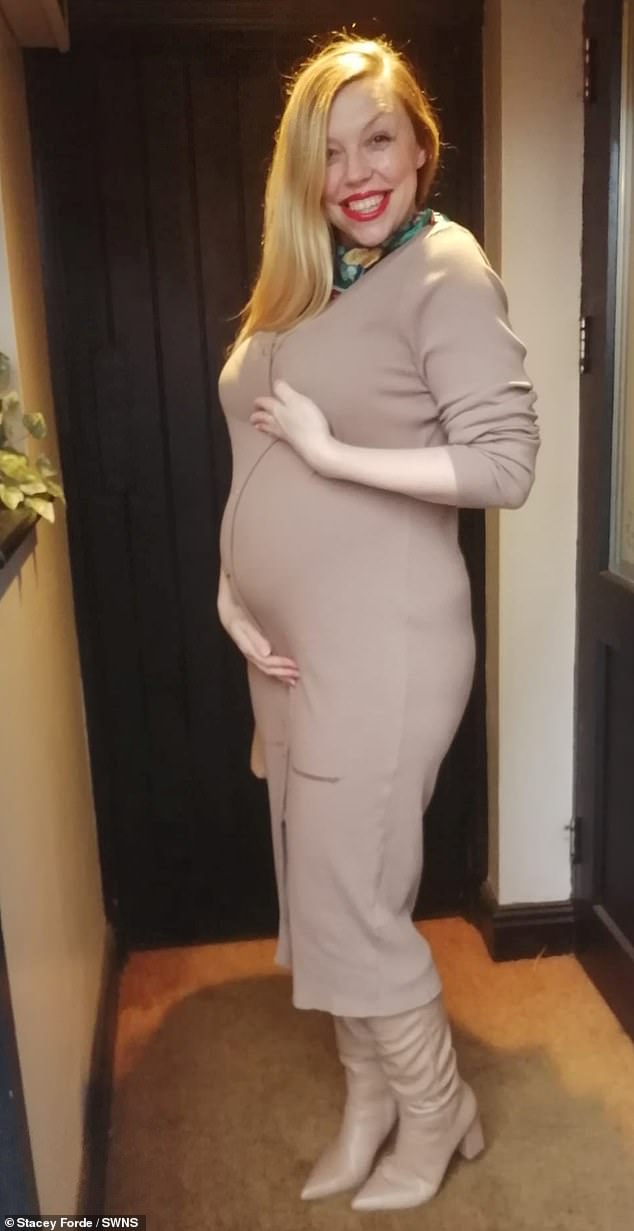 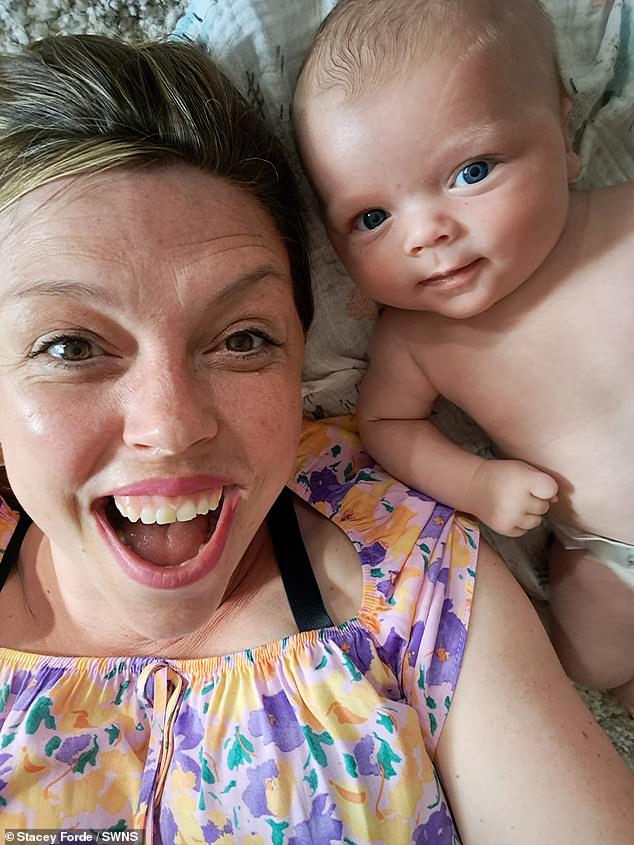 She said: ‘You can pay for a higher level of academic achievement, blonde hair, blue eyes.

‘The more money you have the more you can choose and I couldn’t afford a lawyer so I went for a student.

‘You buy from a sperm bank and can filter what you want like an open donor or an anonymous donor – an open donor is more expensive and you can pay to unlock photos of them as an adult.

‘I chose anonymous and you can only see photos of them as a child. 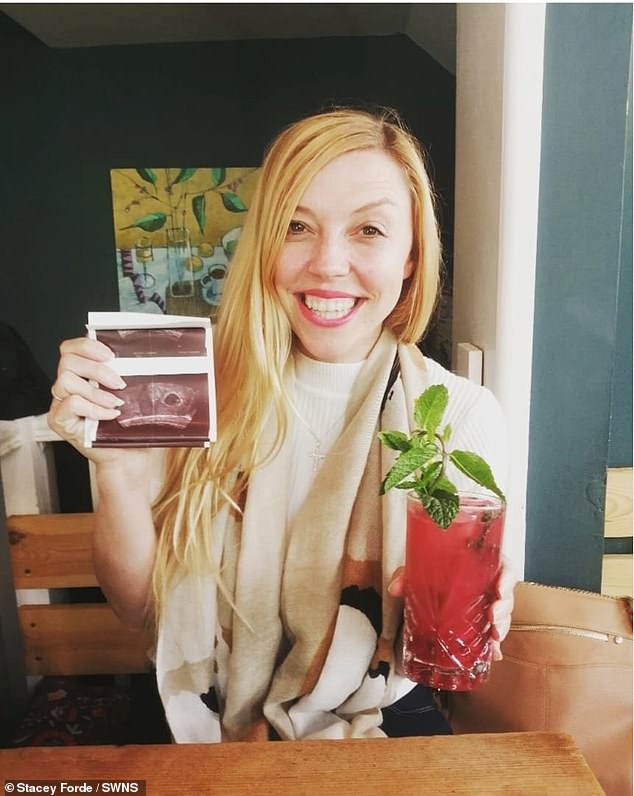 On October 28 2021, she had her three-month scan which confirmed a healthy pregnancy and to her delight she could begin to tell friends and family about what had happened 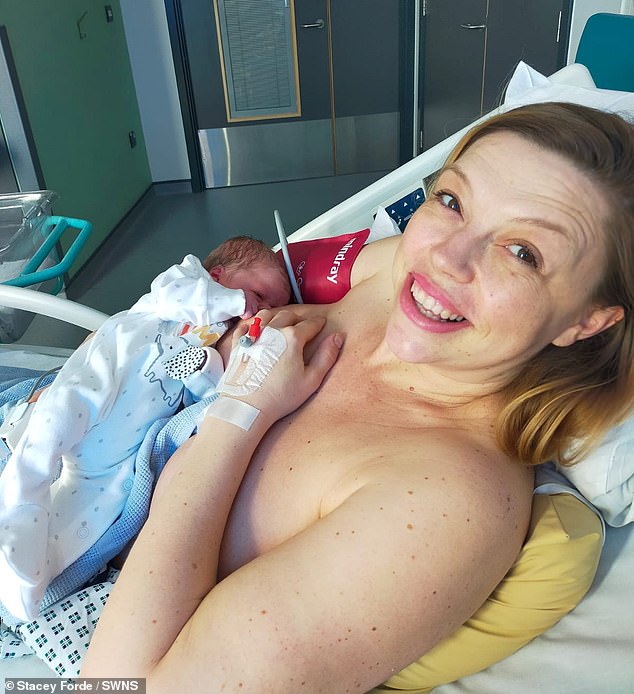 Her son, Aksel Forde, was born on May 4 2022 – and now Stacey is sharing her story to show other mothers-to-be that IVF is an option regardless of relationship status 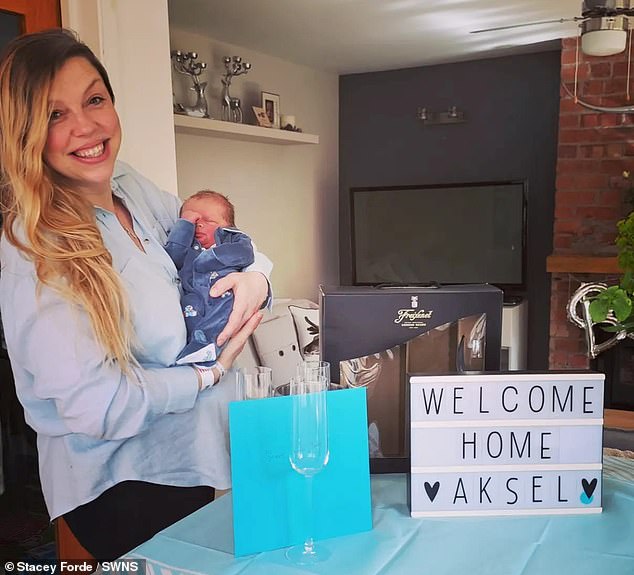 Stacey, who selected the name Aksel as a nod to her son’s Danish sperm donor and heritage, said she was able to check ‘medical profiles and family history’ when choosing

‘You can filter on hair colour, eye colour, height, academic attainment – it’s basically like shopping and at the end you press add to cart, it’s like shopping at Waitrose.

‘I checked their medical profiles against their family history and their psychometric tests – you get a download for each donor with their favourite colour, hobby, and a letter to the prospective child or parent.

‘I chose a six-foot, blue-eyed donor after checking medical history and psychometric tests – in his letter it said ‘dear parent/parents’ and it was important to me that he recognised single parents.

‘Then at the end you press add to cart, it feels a bit underwhelming like being at Waitrose – I didn’t think this is how I would be having a baby.’ 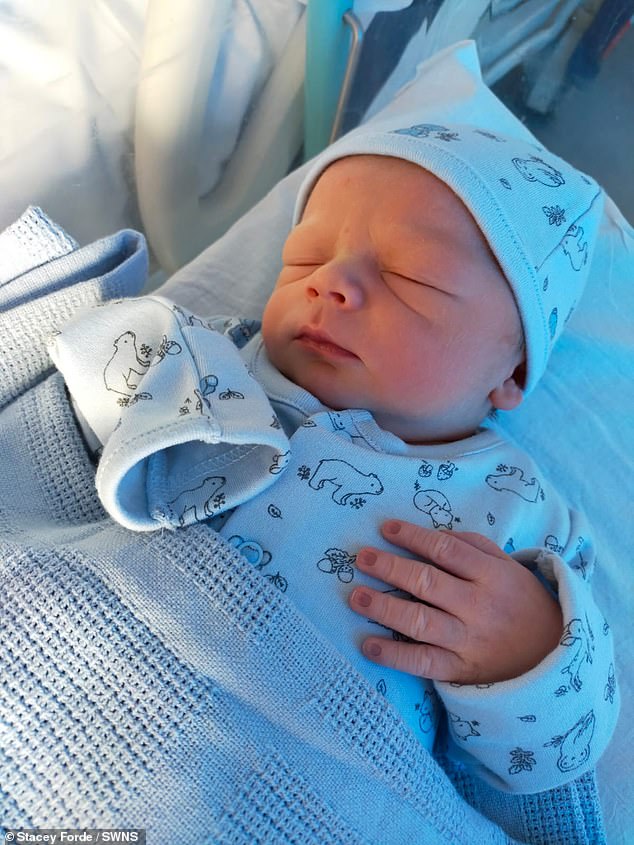 Calling her son, ‘a miracle baby’, Stacey revealed how she was left feeling emotional after learning she was pregnant

Contents hide
I. Growing number of British women are seeking fertility treatments abroad
II. Give This Article A Share:

There are no official numbers, but travel abroad for fertility treatment is a market that’s growing thanks to advances in reproductive technology, competitive pricing and more permissive laws.

Sperm donation is essential for fertility treatment such as intrauterine insemination or IVF.

The world of the donor-assisted baby is still secretive, with most women unwilling to talk openly.

Changes to the UK law in 2005, decreed that a child would have the right to trace any donor when they turned 18.

This resulted in a lack of UK donors because they were put off at being contacted years later.

In the UK it’s generally not possible to flick through a catalogue or look at photographs of the potential donor.

However, The London Sperm Bank, which is the largest in the UK, offers a filtered search where attributes such as eye colour, height, race, hair colour and skin colour can be selected.

However, this price won’t always include everything necessary for treatment, such as blood and virology screening or stimulation medication.

You can purchase a vial of sperm at the London Sperm Bank for £950.

To be able to order a vial of sperm, you must be registered as a patient and undergo your fertility treatment at an HFEA licensed clinic.

However, this price won’t always include everything necessary for treatment, such as blood and virology screening or stimulation medication.

Stacey paid £1,200 for the sperm alone online, before it was transported to a clinic in Denmark in August 2021.

She had five embryos fertilised and tragically four of them didn’t make it – however one of them did.

She said: ‘I did a pregnancy test at home which was positive and it was amazing, it was literally a miracle baby as I knew the others hadn’t worked.

‘A few weeks later I went to have an early scan which showed the pregnancy was positive and progressing and I was just crying. 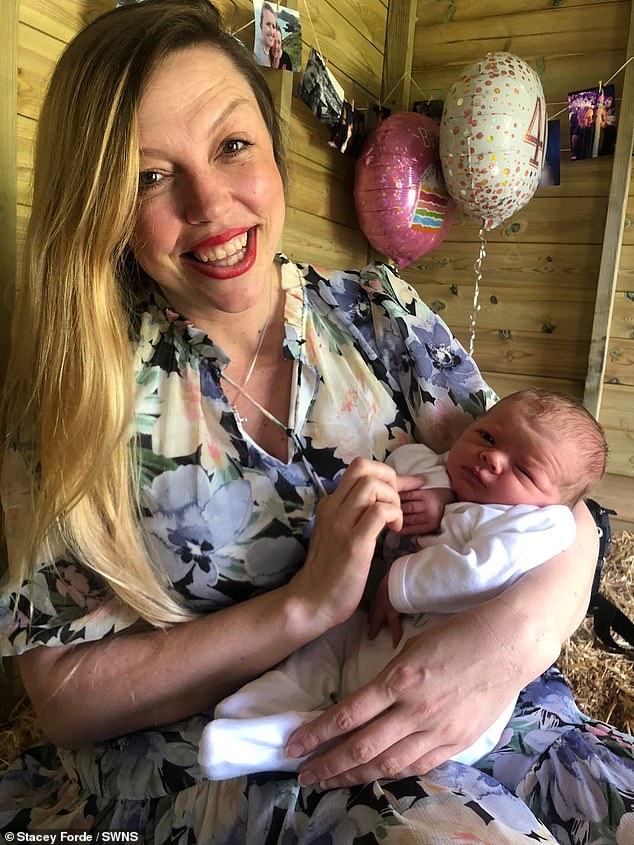 Stacey said she still can’t believe the tiny tot is her son, having welcomed Aksel back in the spring

‘You can’t believe it actually worked even though you go through so much of a journey, you almost don’t allow yourself to believe it has worked.’

On October 28, she had her three-month scan which confirmed a healthy pregnancy and to her delight she could begin to tell friends and family about what had happened.

She added: ‘I was absolutely elated, I had the three month scan which confirmed the pregnancy and I could start telling people.’

On May 4, Aksel Forde was born – and now Stacey said that ten weeks in she still can’t believe the tot is hers. 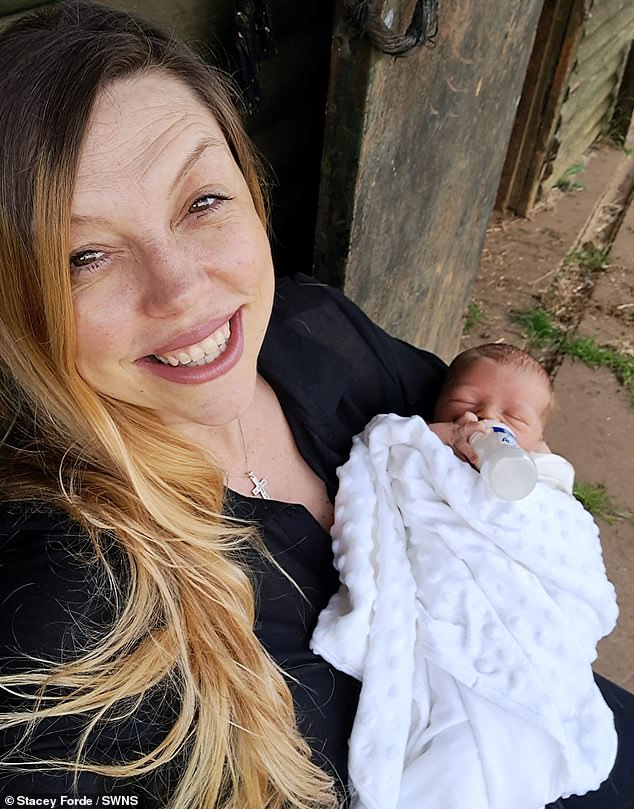 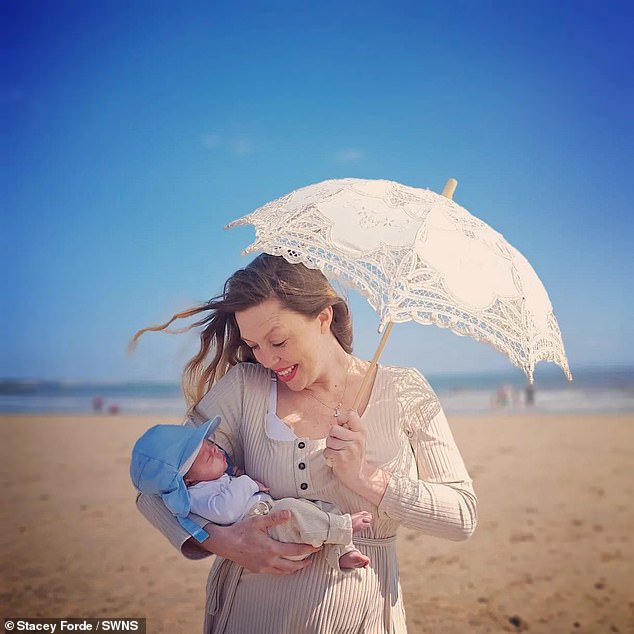 The mother-of-one explained: ‘I spelled it the Danish was as I want it to be part of his history and his story.

‘Women say when you have your child there’s no love like it but it was a smack in the face and words don’t justify how it feels – he’s ten weeks old tomorrow and I still can’t believe he’s mine.’

In total Stacey says she spent £16,000 on two lots of IVF treatments to have her miracle baby.

Stacey said: ‘I want to promote and raise awareness around IVF as it’s not something to feel ashamed of – it’s a really well-informed choice that I’ve made.

‘It’s not easy and it’s not for everyone, it’s so multifaceted and complex and you can get lost in it emotionally and financially.

‘If you are single, it is a route you can take – it was a really successful positive and amazing story for me.’ 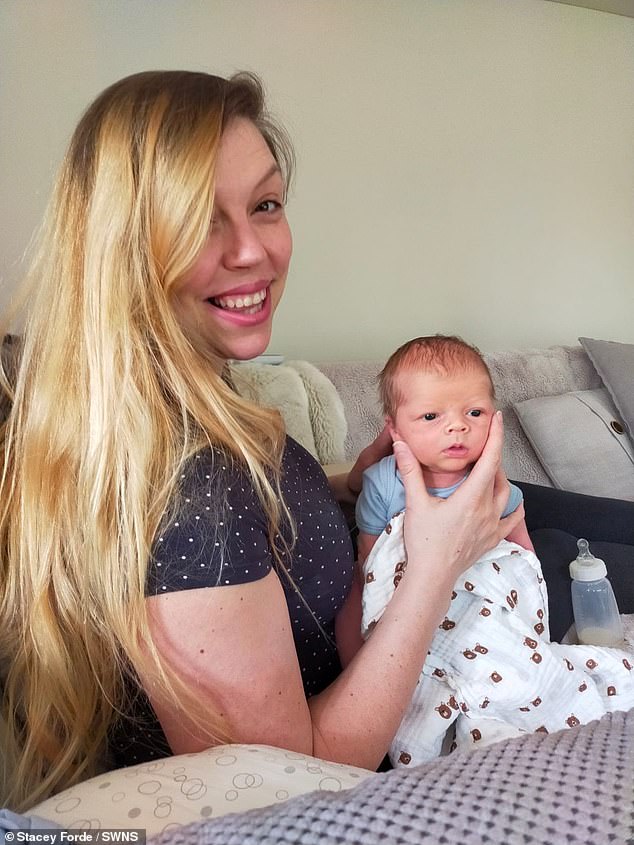 Adorable: The proud new mum said he is ten weeks old tomorrow and she still can’t believe he is her son 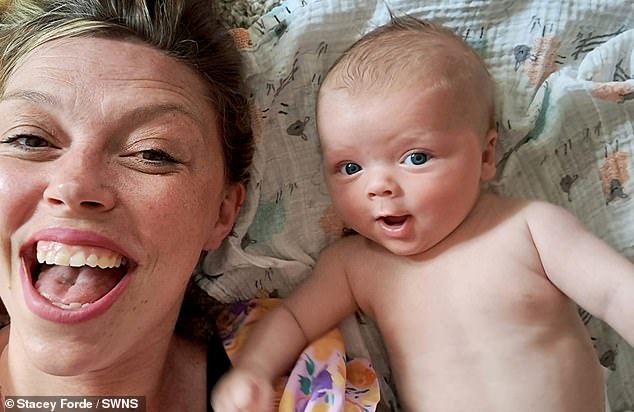