Anne Heche was involved in a wild crash in L.A. Friday, and has been taken away by ambulance in a stretcher.

The crash went down just after noon in the Mar Vista area of Los Angeles. Witnesses tell TMZ, she was driving a blue Mini Cooper and crashed into the garage of an apartment complex.

Residents of the apartment complex tried getting Anne out of the vehicle but she put the car in reverse and then sped off. A short time later, she crashed into a nearby home, igniting a fire. The fire was significant and engulfed the house.

Look closely at the photo of Anne inside the car (above) … there’s a bottle with a red cap in the cupholder next to the gearshift, and it looks like a bottle of alcohol.

Anne apparently suffered severe burns in the fire … you see her clothes are charred as she’s taken away on a stretcher. She’s covered in a white cloth, when she suddenly sits up on the stretcher and starts flailing wildly as they put her in the ambulance. 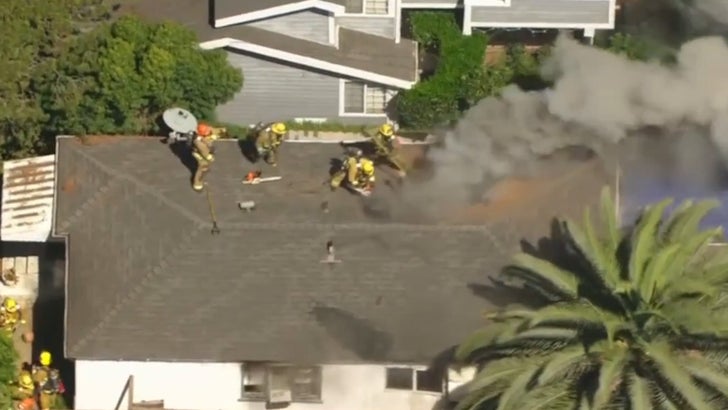 We do not know the extent of her injuries or burns. We’re told she’s currently in the hospital intubated but expected to live. We’re told her condition prevents doctors from performing any tests to determine if she was driving under the influence of alcohol.