Contents hide
I. Aussie woman plunges into a boiling ‘geothermal sinkhole’ in New Zealand when the ‘ground opened up’ underneath her
I.I. Share or comment on this article:
I.II. Give This Article A Share:

An Aussie woman was seriously injured after plunging into a geothermal sinkhole in New Zealand.

The Perth woman, described as elderly, fell after the ground opened up beneath her near a tourist attraction in Rotorua, on the North Island, on Thursday.

She was helped out of the hole by her husband, who was also injured.

A St John ambulance spokeswoman says the woman has been taken to hospital in a critical condition. 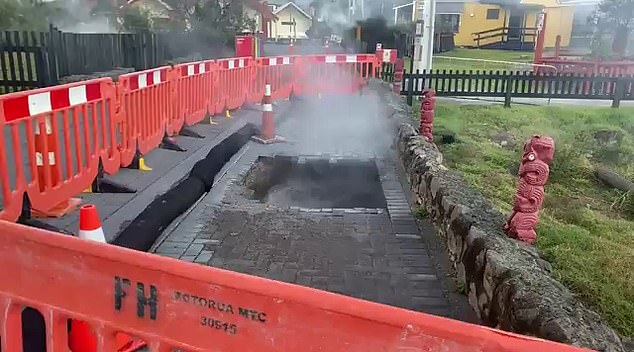 The Perth woman, described as elderly, was seriously injured after plunging into a geothermal sinkhole in New Zealand

‘Two ambulances and one rapid response unit attended the scene. St John treated then transported one patient in a critical condition and one in a moderate condition to Rotorua Hospital.’

The hole is thought to be around two metres long, one metre wide and at least one metre deep.

Village spokesperson Mike Gibbons said the couple were walking along a footpath near the entrance to the village when they fell.

He told 9News the village would be temporarily closed to visitors until a ‘full investigation and assessment had been undertaken by the appropriate authorities, including WorkSafe and the Rotorua Lakes Council’.

‘The area surrounding the fumarole, which is estimated to be 2m long x 1m wide and up to 1m deep…has been closed off to the public, pending the WorkSafe assessment.

‘It appears the ground may have been compromised following the recent heavy rainfall. 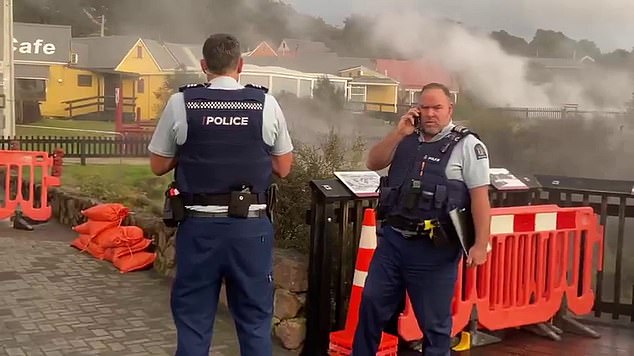 The group opened up beneath the woman near a tourist attraction in Rotorua, on the North Island, on Thursday

‘We are just keeping in communications with them and their families to monitor their wellbeing and recovery from the incident.’

The local Aukaha News said people had reported steam rising from the area about a week ago, prompting authorities to put an orange safety cone in the area.

Rotorua Lakes Council had been notified, with staff being sent to assess damage in the area.

Whakarewarewa Village is a popular cultural attraction as the country’s ‘only living Maori village’ that offers Maori dance performances, a traditional feast and geothermal features, according to its website.