Motorists are queuing up outside of Britain’s cheapest petrol station in droves where filling your tank up is as little as £1.58 per litre – as locals in the remote Yorkshire town say they livid about bargain-hunters blocking their roads.

Dale Head Community Garage in Hawes, North Yorkshire, keeps its prices so low despite the rising cost of living as it runs as a non-for-profit community enterprise which sees any surplus get put back into the local area. It also gets a 5p-per-litre government rebate because of its isolated location.

While some are said to be delighted with the cheap fuel, with reports of people making 50-mile round trips to fill up their tanks, not everyone is happy with the influx of bargain-hunting motorists.

Local roads are being blocked by drivers queueing outside the remote Yorkshire Dales garage, with residents telling MailOnline how ‘livid’ and ‘concerned’ they are about delays on the surrounding roads in the case of an emergency.

Drivers were hit by a record hike in unleaded prices in June as the average cost of a litre rose by 16.6p to 191.4p.

The surge in prices, which is the highest monthly increase in records dating back to 2000, added more than £9 to the cost of filling a typical 55-litre family petrol car.

Dale Head Community Garage’s £1.58 per litre price tag means a family car can be filled up with petrol for £86.90, compared to the national average of £1.80 per litre, leaving others across the country to pay £12 more at £99 for a full tank. 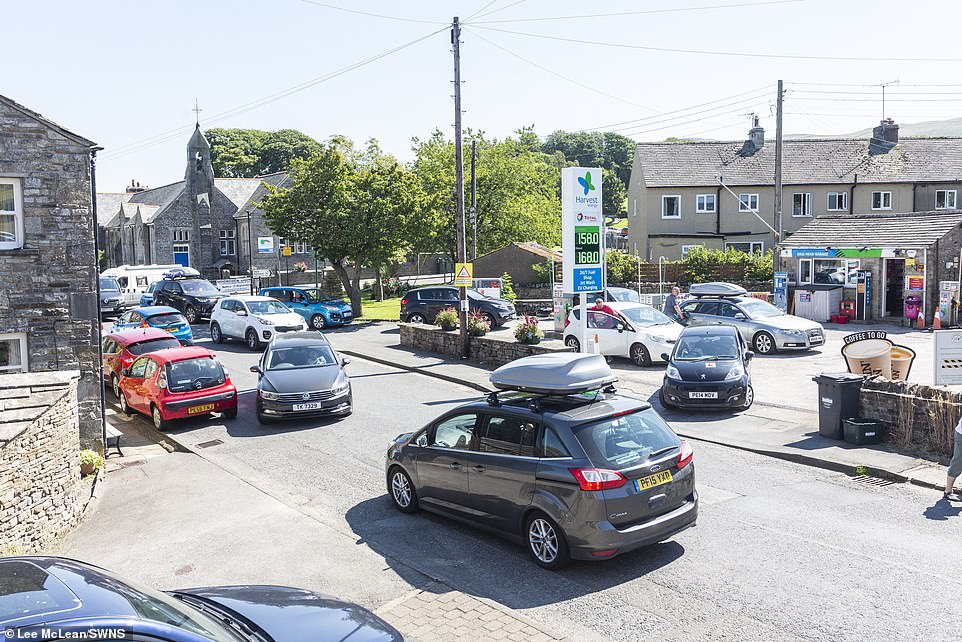 Motorists have been making 50-mile journeys to fill up their vehicles at Dale Head Community Garage in Hawes, North Yorkshire, pictured, where it currently costs just £1.58 per litre of petrol and £1.68 for diesel 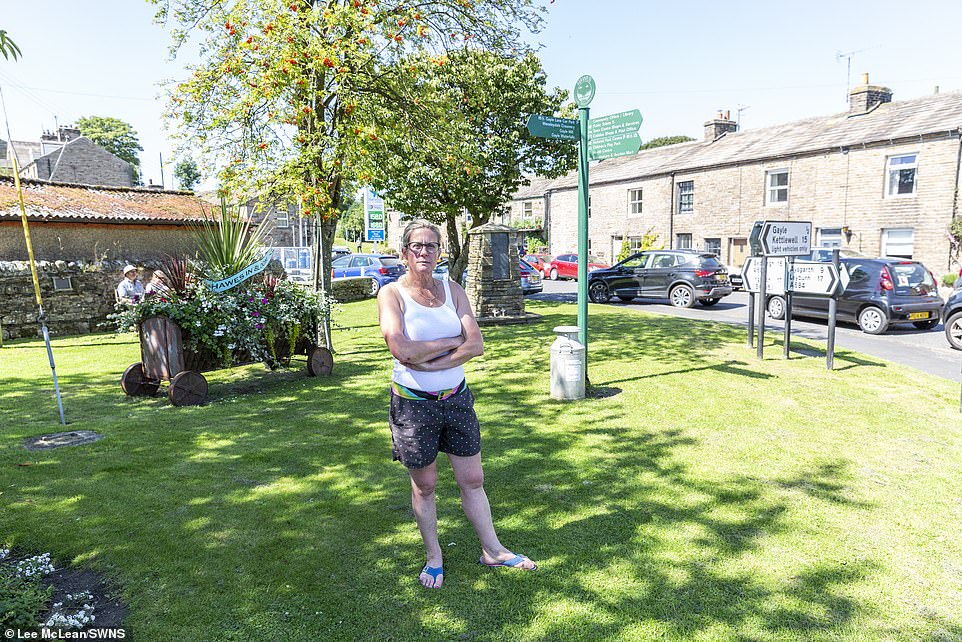 Helene Iveson-Purcival, 50, has lived in the village for 33 years and is ‘concerned’ about the queues of traffic in the village. She told MailOnline that she is f*****g livid’

She told MailOnline: ‘I’m f*****g livid. Local people can’t get on with their day, it has been four weeks now. The other day, the junction was backed up for 15 minutes.

‘I live behind the petrol station, what if I need to get my children or grandchildren across the road in an emergency?

‘The petrol station was built for local people, by local people – it is not built to accommodate this.

‘We often have wagons and tractors coming down the road, but they are getting blocked. It has never ever been this bad before.’

Her son, Max Purcival, 18, said: ‘I work for a boiler company, and a hotel had an emergency so we had to rush there.

‘We needed petrol, but couldn’t fill up here because they were queuing, so we had to go to the motorway to get some. Luckily we didn’t break down.’

Market town Hawes only has an estimated population of more than 1,100, and sits at the head of Wensleydale in the Yorkshire Dales – famous for its production of Wensleydale Cheese.

The Wensleydale Creamery Flagship Cheese Experience and Visitor Centre is only three minutes away from the Dale Head Community Garage. 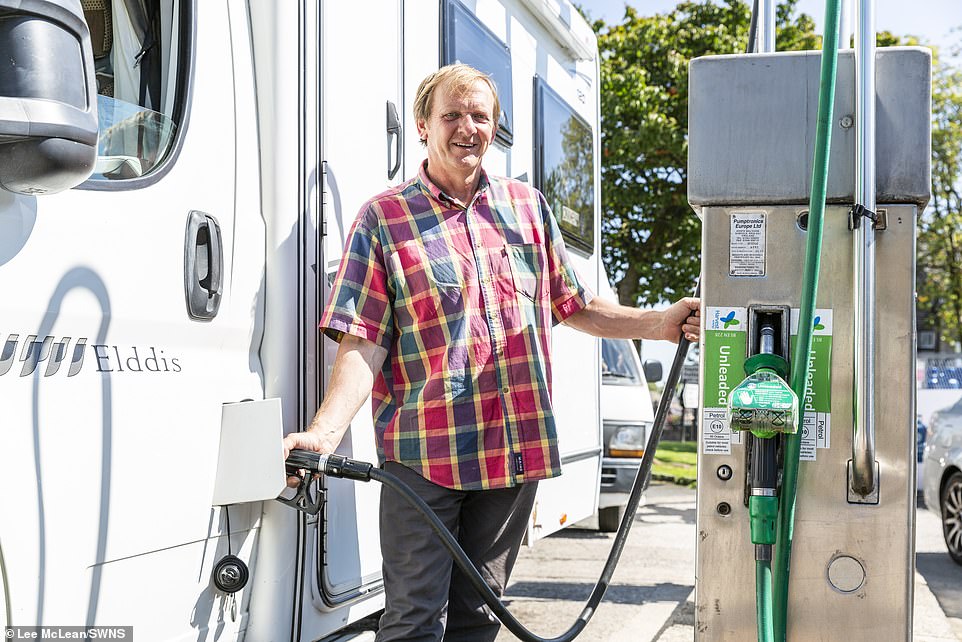 Terry Thornhill, 57 (pictured), and his wife, live in their campervan full time, and their daughter lives around the corner from the garage, who they say has been blocked in her house 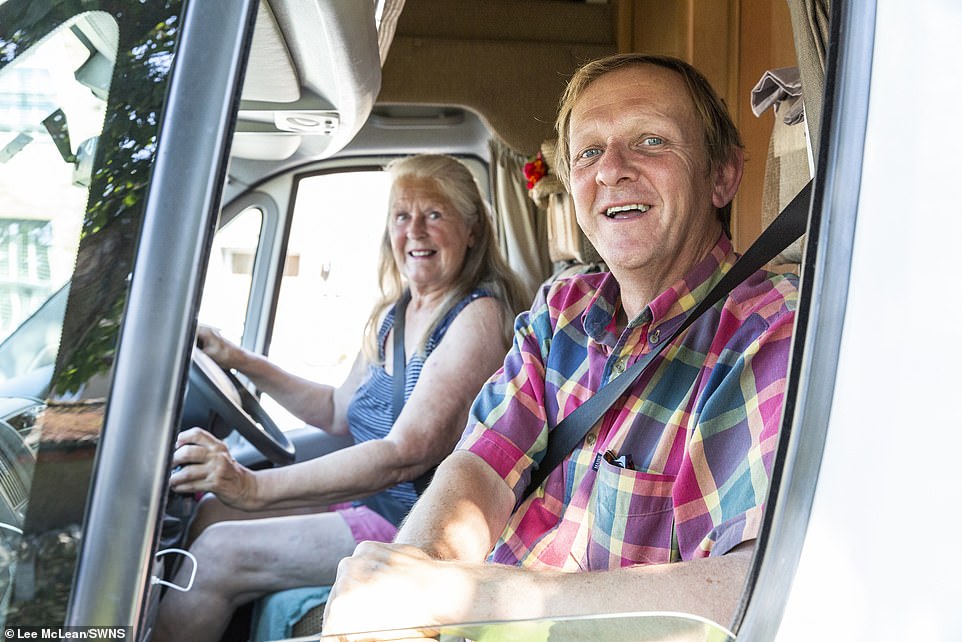 Judith Forsit, 71, left, and husband Terry Thornhill, who live in their caravan, pictured on Wednesday getting some of the cheap petrol at Dale Head Community Garage 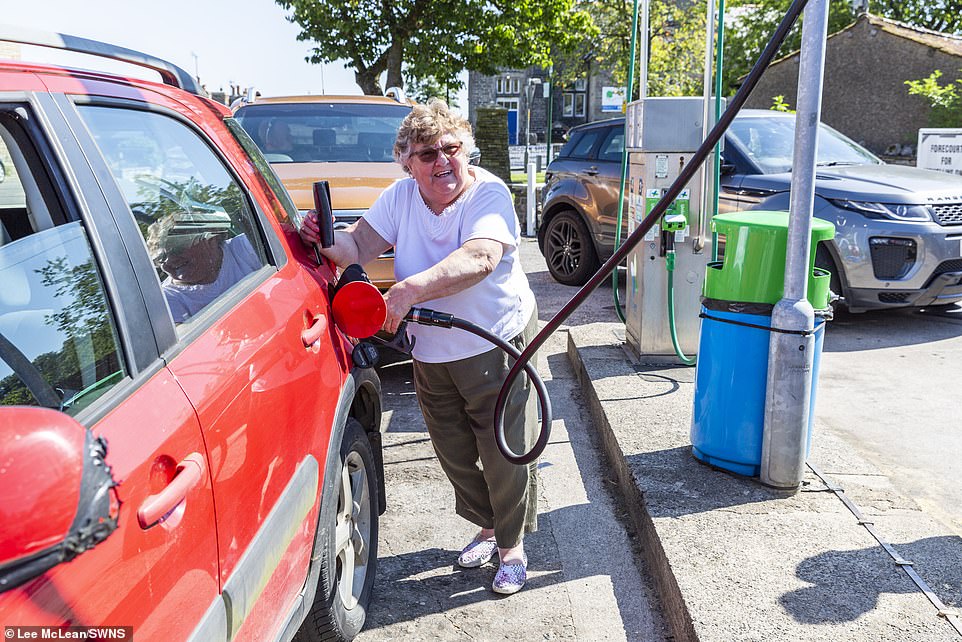 Local Kathleen Martin, 79, pictured, always fills up at the petrol station and thinks it is ‘fantastic’ that the prices are so low 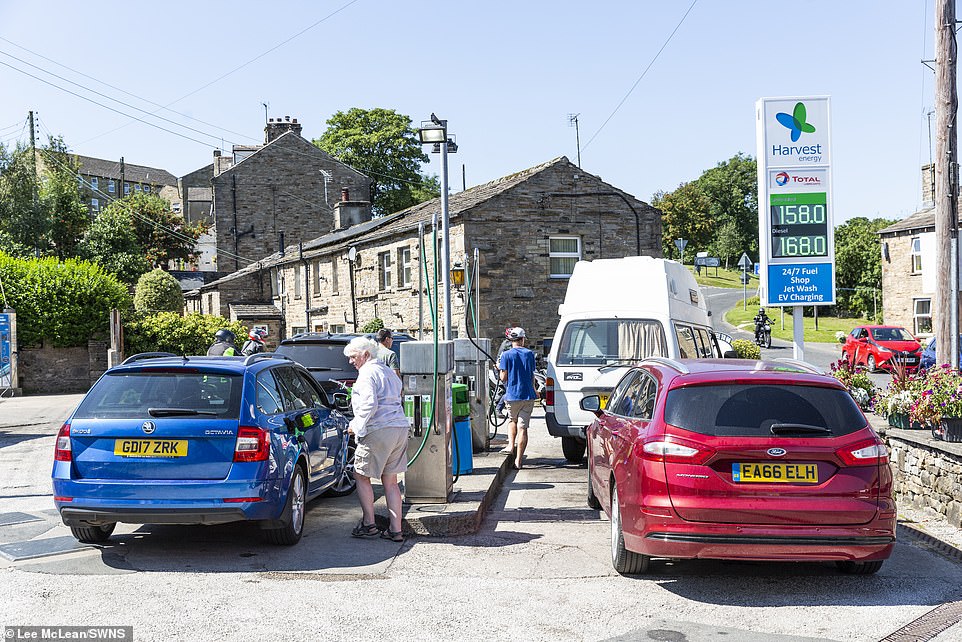 Abbie Rhodes, 45, the general manager of the petrol station, said: ‘Some of the local people find it inconvenient, but I think they are enjoying the prices. The queues should be gone when there’s no more winter tourists.’

Chris Yelling, 47, was visiting the area from Sussex, and was ‘quite surprised’ at how cheap the fuel is.

He said: ‘It was 188.0p a litre when we left Sussex, so it is a nice bonus coming up here. We’ve come up here for our holiday for years, and it has never been this cheap.’

Local Kathleen Martin, 79, always fills up at the petrol station and thinks it is ‘fantastic’.

She said: ‘Lots of people are travelling to come here, and you need to think is it really that economical. I have been driving 62 years, and have always filled up here.’ 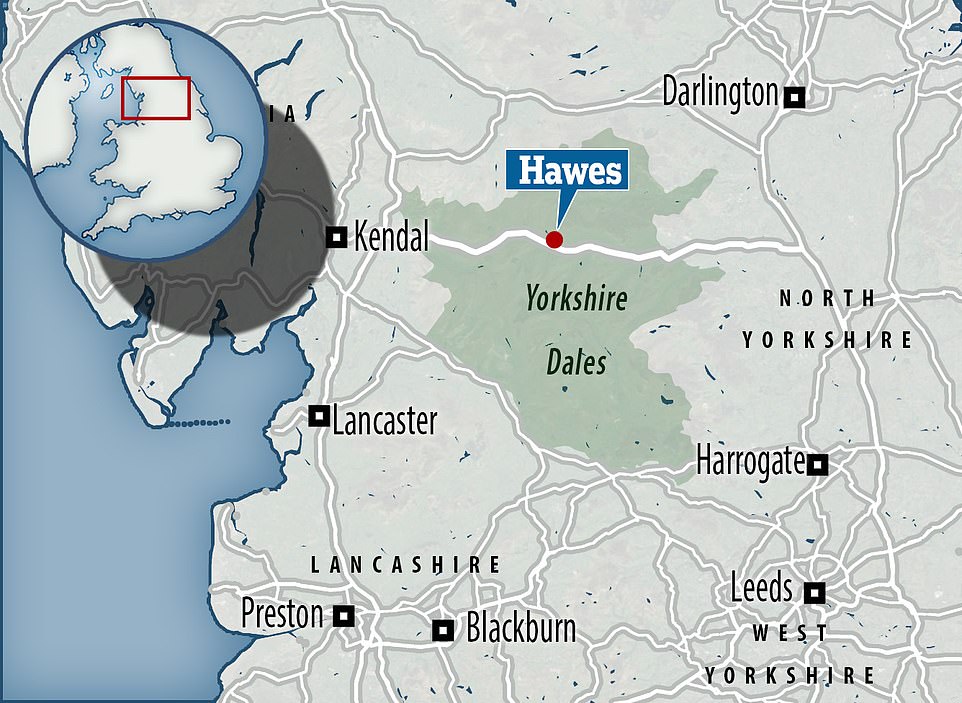 The garage, located in Hawes, a remote part of the Yorkshire Dales, has seen some people making a 50-mile round trip to take advantage of the cheap fuel prices 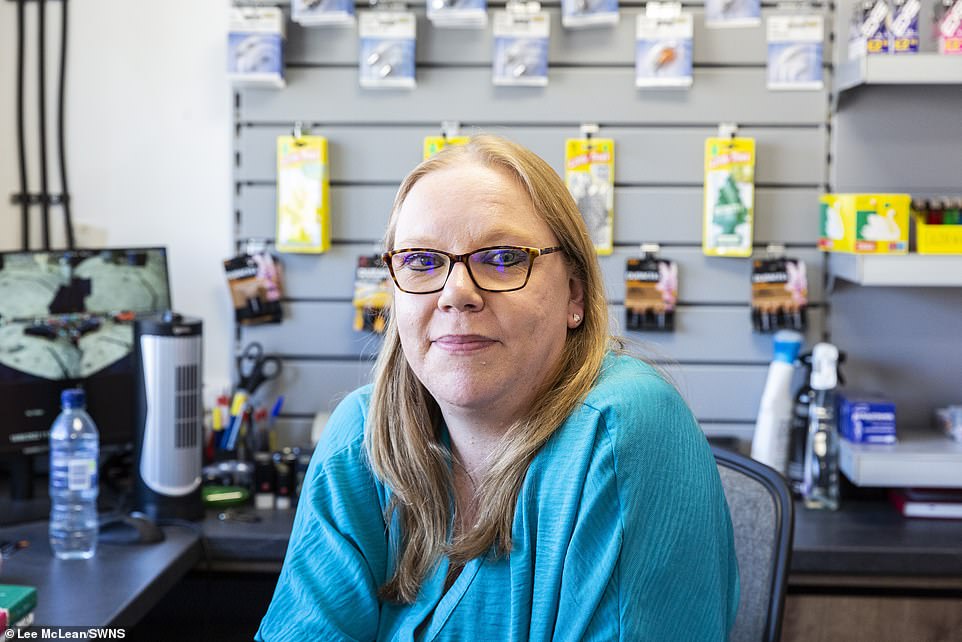 Abbie Rhodes, 45, the general manager of the petrol station, pictured, said: ‘Some of the local people find it inconvenient, but I think they are enjoying the prices. The queues should be gone when there’s no more winter tourists’

Nelly, 65, and Derrick Walker, 75, were passing through the village from their holiday in Scotland to their home in Great Yarmouth when they slammed on the brakes to fill up their tank.

Derrick said: ‘We saw it as we were passing, saw the prices and just put my foot on the break. It is too good not to stop, when we left home it was 197p a litre.’

Judith Forsit, 71, and Terry Thornhill, 57, live in their campervan full time, and their daughter lives around the corner.

Judith said: ‘Yes the system isn’t perfect, but we are glad we have been able to fill up with the prices here.

‘But my daughter has had lots of different problems, with people blocking her junction and she can’t always get out of her house.’ 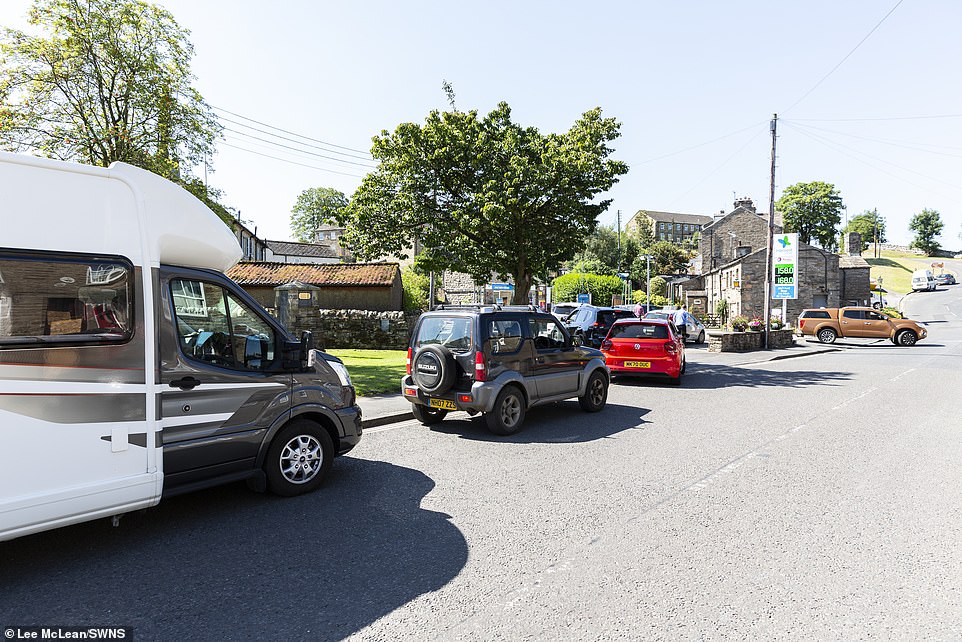 The UK still has a higher average petrol price of 186p a litre than all European Union members except Finland (190p) and Denmark (186p), with drivers in France paying around 23p a litre less than those in the UK. But this station in the Yorkshire Dales is an exception with 158p per litre 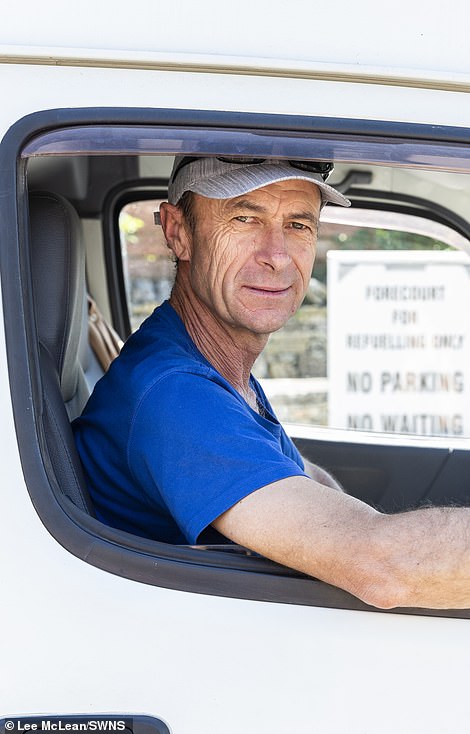 Carl Kay, 56, from New Zealand, pictured left, is currently travelling around the UK in his campervan but was not as impressed with the prices. Pictured right, Chris Yelling, 47, a tourist from Sussex, said the low prices were a ‘nice bonus’ during his holiday

Carl Kay, 56, is currently travelling around the UK in his campervan but was not as impressed with the prices. He said: ‘Back home in New Zealand, it is pretty cheap and it’s not at their prices just yet.

‘We can’t control the price though but I’m still going to fill up, even though my tank is three quarters full.’

The UK still has a higher average petrol price of 186p a litre than all European Union members except Finland (190p) and Denmark (186p), with drivers in France paying around 23p a litre less than those in the UK.

Fuel prices were already rising before Russia’s invasion of Ukraine in February, but the impact of the war has exacerbated the situation.

A reduction in the use of Russian oil has increased demand from other producers, resulting in higher prices.