President Joe Biden insisted he was feeling fine and hard at work on Thursday, after the White House announced he had caught COVID-19 and was isolating at his residence.

‘Folks, I’m doing great,’ the 79-year-old president said in a tweet. ‘Thanks for your concern.

Earlier, his doctor said the president was suffering fatigue, a dry cough and runny nose.

And first lady Jill Biden, who tested negative despite being a close contact, said her husband was doing well.

‘I talked to him just a few minutes ago,’ she told reporters during a trip to Detroit. ‘He’s doing fine, he’s feeling good.’

Biden had two doses of the Pfizer coronavirus vaccine shortly before taking office. He received a first booster shot in September and a second on March 30.

Stringent White House precautions meant he had avoided the virus, even as it laid low close aides and advisers.

‘He has begun taking Paxlovid. Consistent with CDC guidelines, he will isolate at the White House and will continue to carry out all of his duties fully during that time.’

With symptoms emerging on average about five days after contact with an infectious person, Biden’s recent contacts and travel will be under scrutiny for a possible source.

Six days ago Biden was in Saudi Arabia where he bumped fists with the controversial figure of Crown Prince Mohammed Bin Salman; and earlier he was forced to pause remarks in Israel because of a coughing fit. 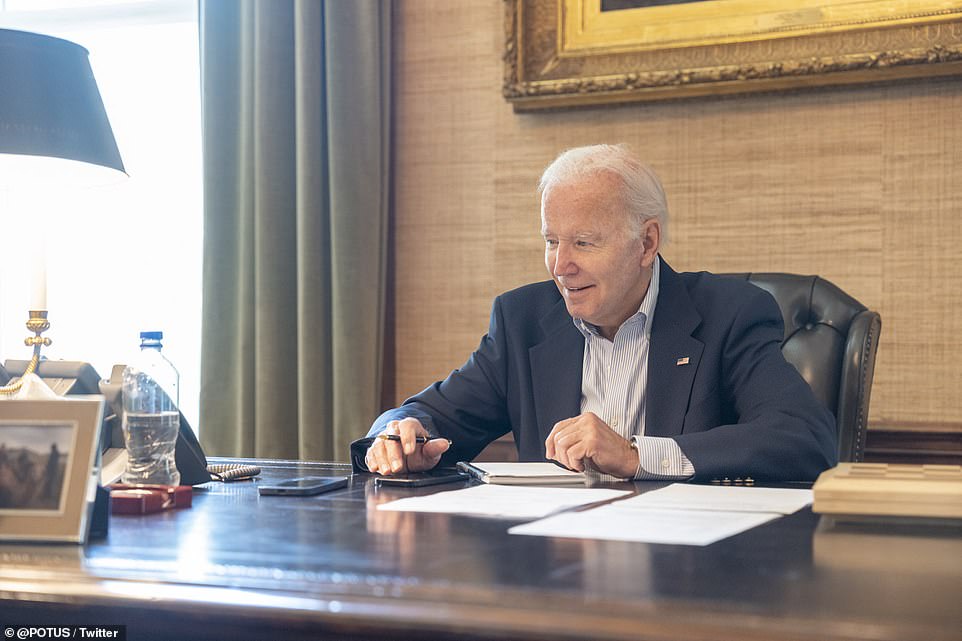 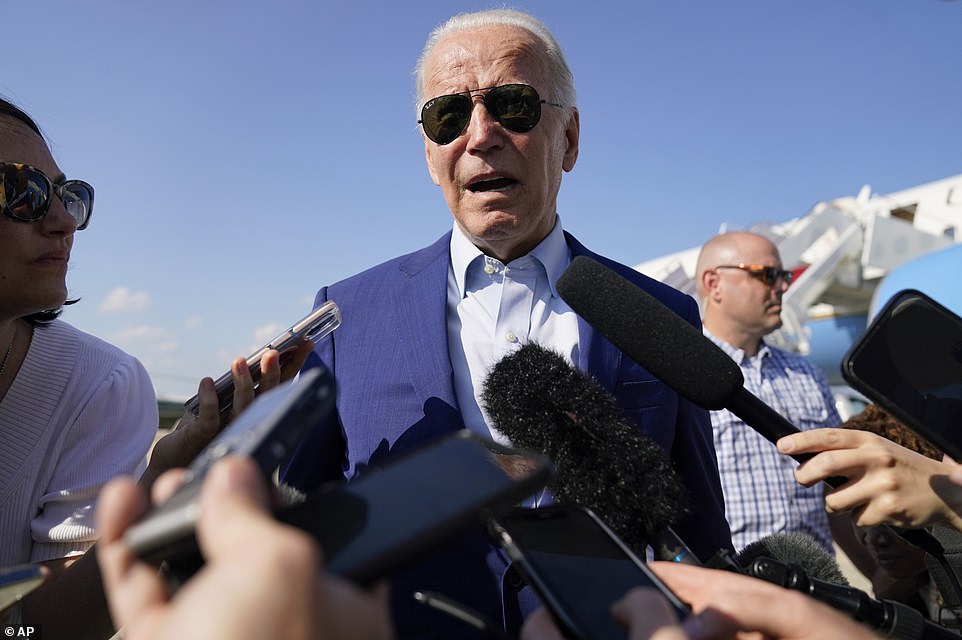 Biden tested positive for COVID-19 on Thursday morning, a day after he traveled to Massachusetts to deliver a major speech on climate change. Officials said his last negative test was on Tuesday 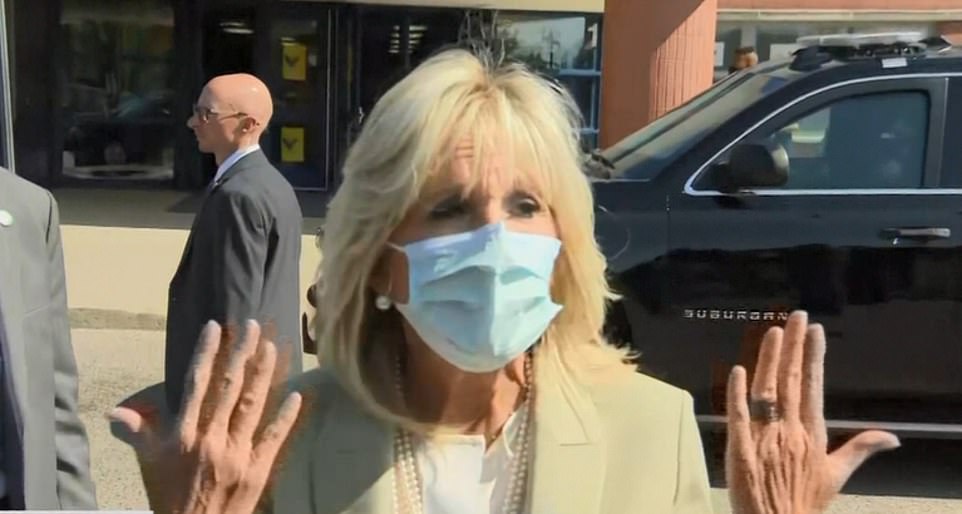 The first lady’s office said on Thursday that Jill Biden had tested negative, despite being a close contact, and would stick to her schedule in Michigan and Georgia 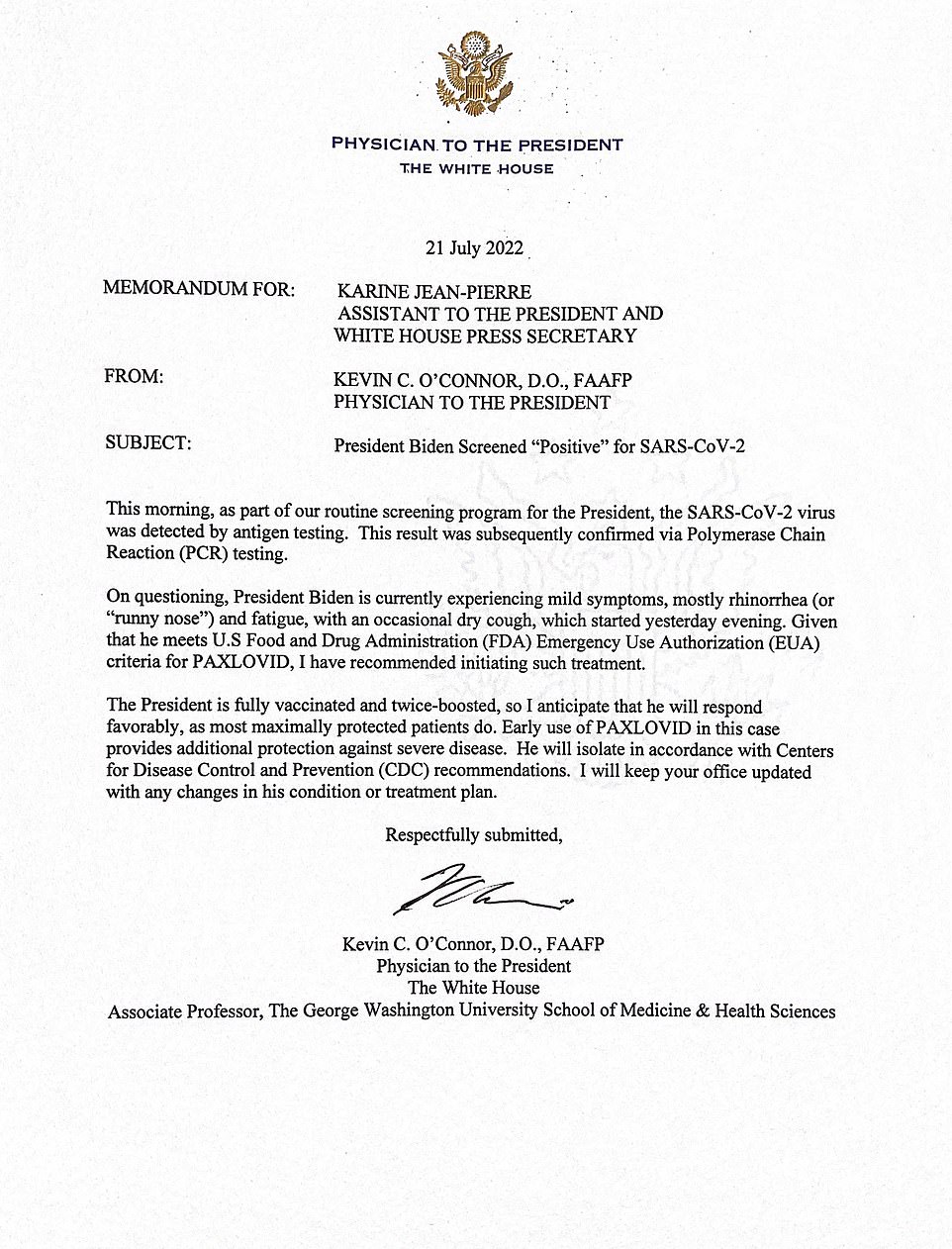 Contents hide
I. What is Pfizer’s ‘gold standard’ Covid drug Paxlovid?
II. Give This Article A Share:

Paxlovid is an antiviral drug designed to halt a COVID infection in its tracks.

The pill works by interfering with the viral replication process, stopping COVID from making copies of itself.

This buys valuable time for the immune system to fight off the virus.

It is available on prescription in the U.S. to any immunocompromised Americans within five days of them developing COVID symptoms.

It is also free, with the Federal Government footing the $530 bill for each course.

Patients who receive the treatment must take three tablets twice a day for five days.

Clinical trials showed it slashed hospitalisation rates by 89 per cent among at-risk people who took it within three days of developing Covid symptoms. Some of these were vaccinated.

Supplies were scarce when the pill was first approved in December, but there is now an abundance in the U.S. across many states.

In part that was because of stringent measures to protect the commander-in-chief, such as not serving water to guests in his presence – lest they remove their masks – and seating him 10ft from participants in meetings.

In a letter to the press secretary he said he expected the president to respond well to treatment.

The first lady’s office said Jill Biden had tested negative in Detroit on Thursday morning, and would stick to her planned schedule in Michigan and Georgia.

Harris’s schedule – a trip to North Carolina – will continue as planned, but the vice president will remain masked throughout, on CDC advice.

And she said the White House will provide a daily update on his health and that the president will take part in his planned meetings by phone and Zoom from the White House residence.

‘Consistent with White House protocol for positive COVID cases, which goes above and beyond CDC guidance, he will continue to work in isolation until he tests negative,’ she added.

‘Once he tests negative, he will return to in-person work.’

Top White House officials in recent months have been matter-of-fact about the likelihood of the president getting COVID, a measure of how engrained the virus has become in society — and of its diminished threat for those who are up to date on their vaccinations and with access to treatments.

Pfizer’s Paxlovid has become the weapon of choice for tackling COVID infections.

It has been proven to bring about a 90% reduction in hospitalizations and deaths among patients most likely to get severe disease.

In an April 30 speech to more than 2,600 attendees at the White House Correspondents’ Association dinner, Biden acknowledged the risks of attending large events, but said it was worthwhile to attend. 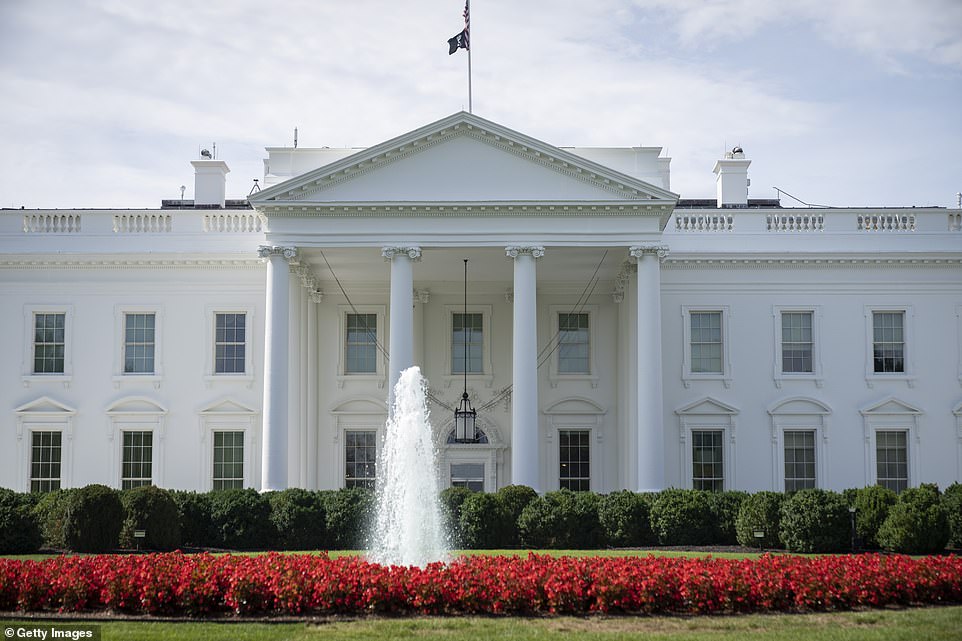 Biden will work from the residence of the White House on Thursday, joining meetings by phone and Zoom 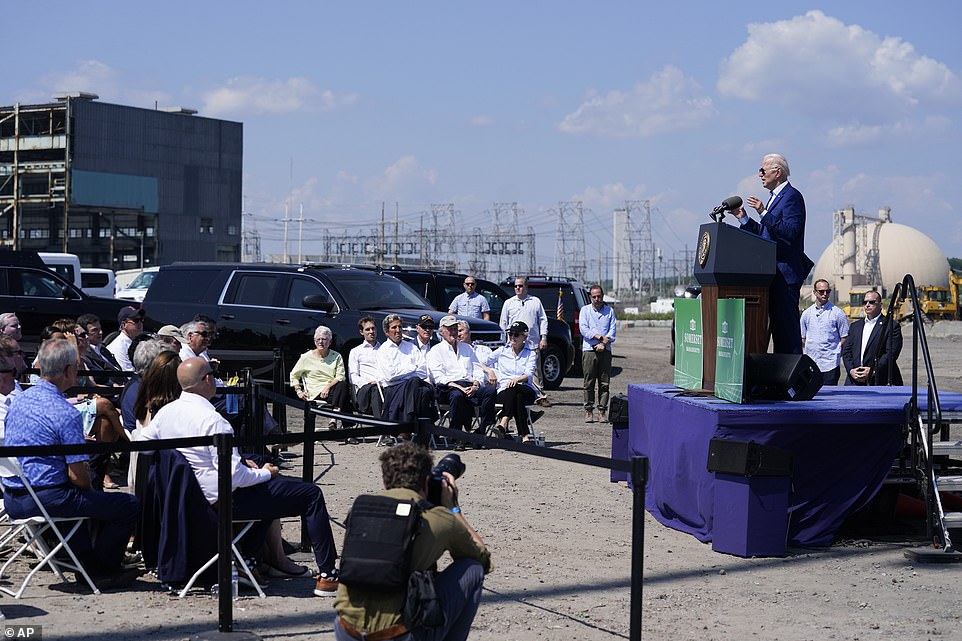 On Wednesday, Biden delivered a speech in Massachusetts. He has stepped up travel in recent weeks 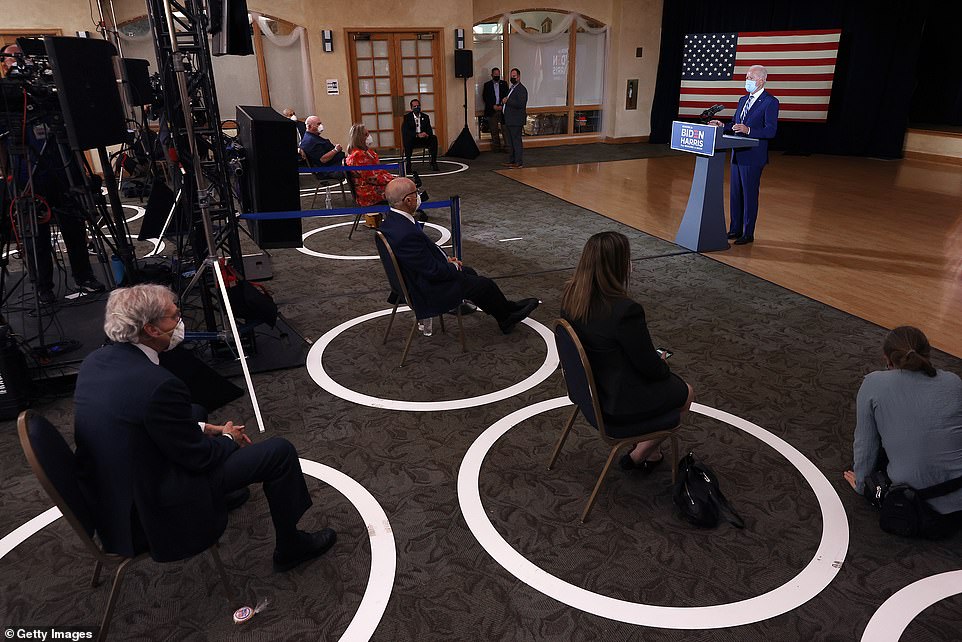 During his presidential campaign, Biden held socially distanced events, including having reporters sit in circles to ensure they were six feet away from one another, in contrast to the more relaxed regimen of Donald Trump’s campaign 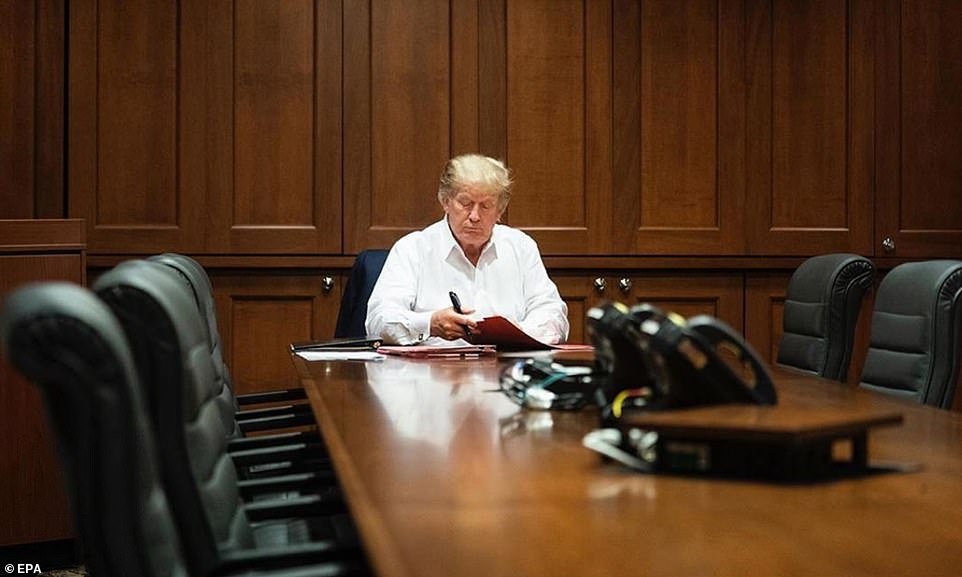 Biden’s predecessor was hospitalized with COVID-19 for three days in 2020, shortly before the presidential election

‘I know there are questions about whether we should gather here tonight because of COVID,’ he said. ‘Well, we’re here to show the country that we’re getting through this pandemic.’

Yet, the White House has gone to great lengths to keep Biden healthy.

For example, during a February meeting with governors he was the only one to be given a glass of water. And he sat more than 10 feet away from everyone, including Harris.

Biden is far from the first world leader to be laid low by the virus.

Donald Trump was hospitalized for three nights in October 2020. Aides played down the severity of his illness at the time, but it later emerged that some feared he might die amid a scramble for the very latest drugs.

Biden and his administration have been much more cautious in taking preventative measures than their predecessors.

However, in his State of the Union address at the start or March Biden said the declining number of cases and the effectiveness of vaccines meant it was safe for most Americans to get back to normal.

‘Tonight, I can say we are moving forward safely, back to more normal routines,’ he said. ‘It’s time for Americans to get back to work and fill our great downtowns again.’

The emergence of fresh variants in recent weeks has upended some of that optimism. In particular, the BA.5 variant is thought to be responsible for a fresh rise in cases.

‘We should not let it disrupt our lives,’ said Dr. Anthony Fauci, the nation’s top infectious disease expert, recently, ‘but we cannot deny that it is a reality that we need to deal with.’ 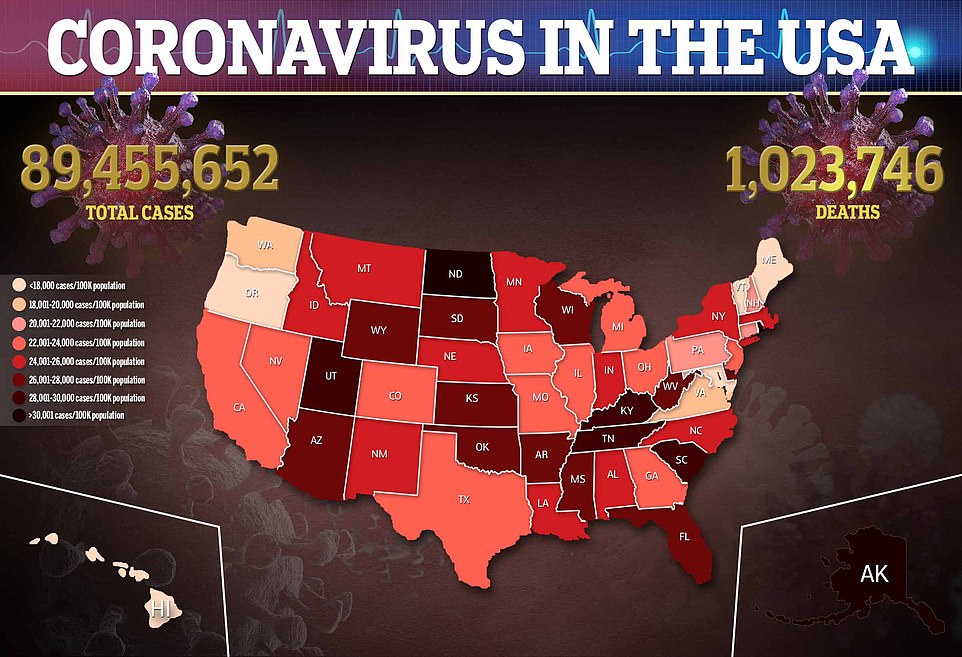 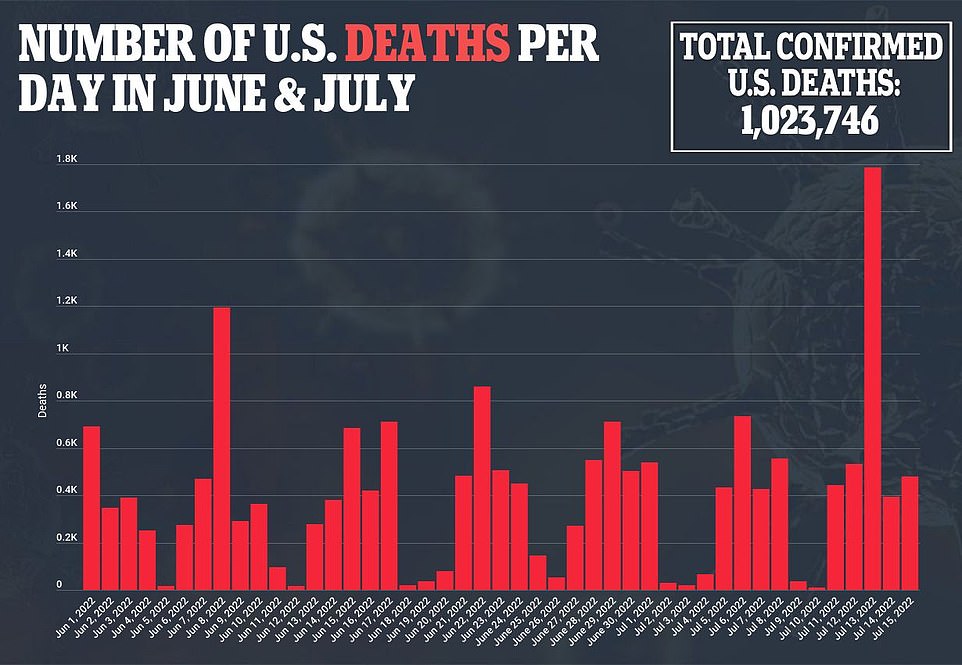