British Airways has suspended the sale of short-haul tickets from Heathrow for at least a week in a bid to free up enough seats to re-book passengers whose flights were axed.

Sales on BA’s domestic and European routes and via Morocco and Cairo have been suspended up to and including August 8.

The airline said it was the ‘responsible’ thing to do amid ‘ongoing challenges facing the entire aviation industry’. It is hoping to re-start sales next Tuesday.

It is the latest move amid the chaos gripping the aviation industry as it continues to struggle with staff shortages.

BA has cancelled more than 30,000 flights over the summer and axed more after Heathrow last month brought in a daily departing passenger cap of 100,000. It means customers are entitled to being re-booked on to alternative services if their original flight was cancelled, and the move is to ensure there are enough seats to accommodate those affected. 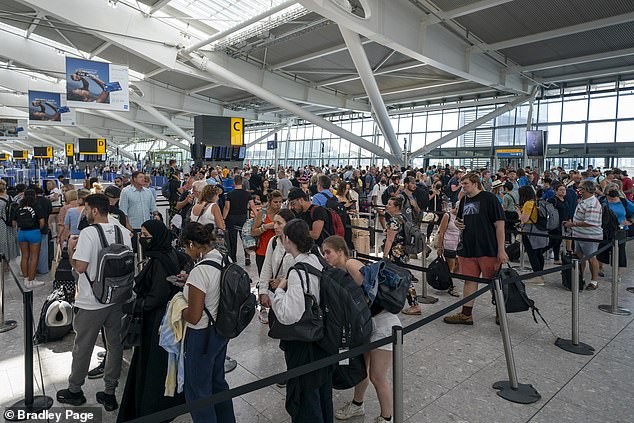 Sales on BA’s domestic and European routes and via Morocco and Cairo have been suspended up to and including August 8 from Heathrow, to free up seats to rebook passengers whose flights were axed. Pictured: A large queue of passengers at Heathrow Airport

Those who can’t be re-booked on to a BA service will be entitled to being given a seat on a rival carrier at great cost to the airline. It comes after Heathrow boss John Holland-Kaye warned curbs on holiday flights from the UK and European airports could continue until next summer.

Mr Holland-Kaye told the Mail: ‘We’ve seen no change in airline behaviour towards ground handling and unless something changes radically we’re going to be in the same situation in six months’ time or maybe even 12 months.’

BA said in a statement: ‘As a result of Heathrow’s request to limit new bookings, we’ve decided to take responsible action and limit the available fares on some Heathrow services to help maximise rebooking options for existing customers, given the restrictions imposed on us and the ongoing challenges facing the entire aviation industry.’

Last night, a senior aviation source told The Times: ‘I’ve never seen anything like this.

‘BA will have hated having to do this at the peak of the summer season. It completely removes them from the lucrative last-minute market at a crucial time.’

The airport’s cap disproportionately affects BA as it is the largest airline at Heathrow. 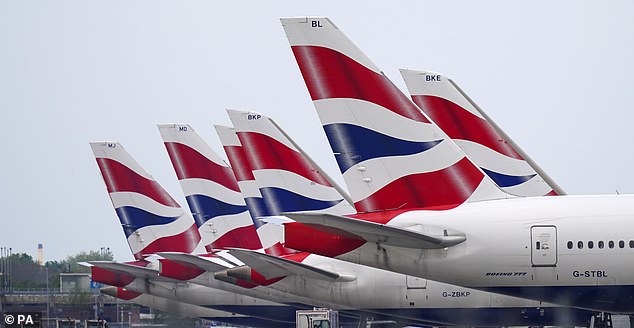 Those who can’t be re-booked on to a BA service will be entitled to being given a seat on a rival carrier at great cost to the airline. Pictured: British Airways planes 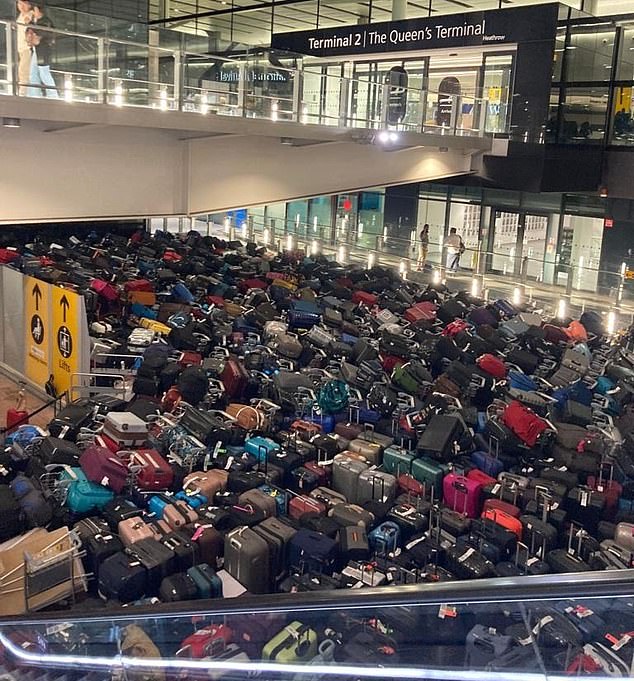 BA’s decision to suspend sales will affect the whole industry, pushing up prices on rival carriers.

But it will help to stabilise the carrier’s operations and reduce the risk of disruption caused by overbooking.

One source told the Times that BA had inflated some prices on routes to deter people from booking, adding that prices were up to £400 one way for a London to Edinburgh flight.

He added that even the majority of business customers would not pay that price and that the airline were doing it to deter people from booking.

Usually, during times of high demand, airlines will hold back seats and then sell them for vast profit. But due to BA’s decision to suspend flights, they will miss out on this at Heathrow. 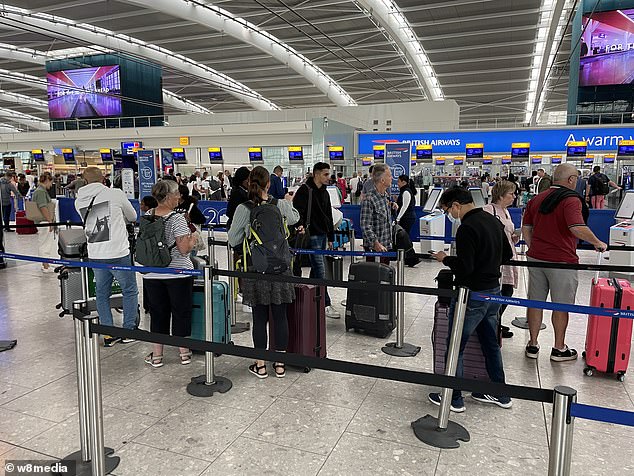 During times of high demand, airlines usually hold back seats and then sell them for vast profit. But BA will miss out on this at Heathrow because of their decision to suspend flights. Pictured: A busy Heathrow Terminal 5

Other BA bases have seen their prices soar, with a one-way flight from Gatwick to Marrakesh on August 5 costing £575.

This compares to £92 towards the end of Summer. A flight from London City to Nice on August 8 is now £814 and a flight at the end of August from Heathrow to Nice is £50.

BA’s suspension of ticket sales for short-haul ticket flights comes as passengers were filmed crawling through hatches in the baggage reclaim area at Manchester Airport, after they lost patience with hours of delays and ‘chaos.’

An undercover reporter working at Manchester Airport as a baggage handler for Swissport was told that travellers trying to get air-side to reach their bags ‘happens all the time.’

They added that it causes ‘fights’ and branded the situation ‘f*****g chaos’, saying the cause was that they had ‘literally no staff’. 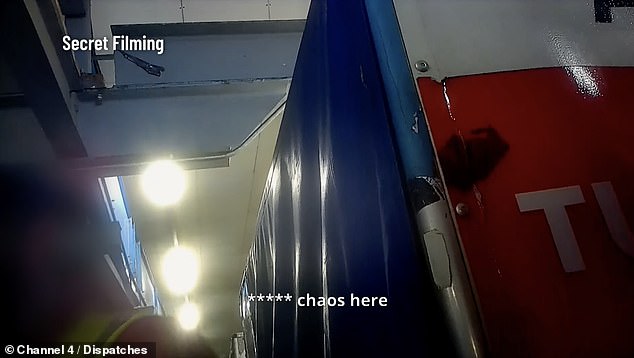 Speaking to one person at Manchester, the undercover reporter on Dispatches was told that people trying to retrieve their bags often cause ‘fights’ and branded the situation ‘f*****g chaos’ 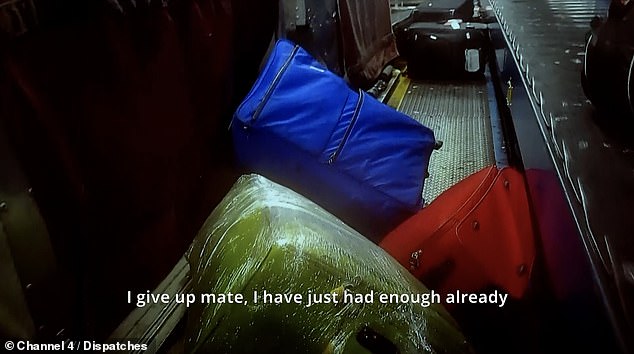 The reporter also spoke to someone who said they ‘give up’ and have ‘had enough.’ The investigation also exposed that some pilots with one budget airline feel pressured to fly longer hours while suffering fatigue

The alarming revelations come after months of disruption which has seen a staggering 1.7million people flying out of or into the UK impacted by cancellations within 48 hours of their flight.

Channel 4’s Dispatches also discovered that physically demanding work that would typically be covered by two or more people was performed by individual handlers at Heathrow, with conditions at shifts starting at 3am described as ‘absolutely brutal’.

And a Wizz Air pilot whistle-blower told the programme about what they feel is pressure to fly longer hours. 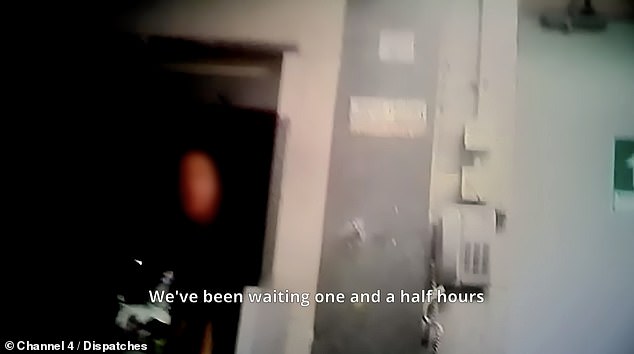 Speaking anonymously, the pilot said: ‘There is a shortage of crew and to avoid cancelling flights they encourage staff to work harder.

‘There is pressure for us to help out by flying on our days off. You can report sick if you are fatigued but you will lose financially if you do.’

The Home Office today said the warning about queues at passport control exceeding three hours was ‘false’, with over nine out of ten passengers queuing for less than 30 minutes in July.

A spokeswoman said Border Force ‘works hard to ensure it has the right level of resources to check that passengers are compliant with our measures and to maintain border security as travel continues to open’.

It had recently recruited 800 new staff, she added. 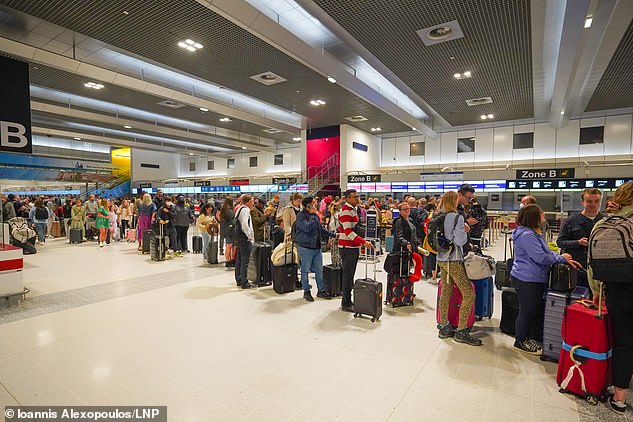 Swissport, the baggage-handling company used by many airlines, sacked over half of its 6,000 staff during the pandemic. The company said it was sorry that it had a part in the disruption caused at Manchester Airport, pictured

At the time he said: ‘We are all fatigued but sometimes it is required to take the extra mile.’

Wizz Air racked up losses of £550million for the 12 months to the end of March – although revenue more than doubled to £1.4billion.

Martin Chalk, general secretary of the British Airline Pilots Association, told Dispatches someone who was ‘fatigued’ was ‘not in a fit state to fly an aeroplane’.

Swissport, the baggage-handling company used by many airlines, sacked over half of its 6,000 baggage handling staff during the pandemic.

In a bid to speed up counter-terrorist and accreditation checks on new recruits, ministers have ordered the vetting centre to prioritise airport staff to help plug the gaps quicker. 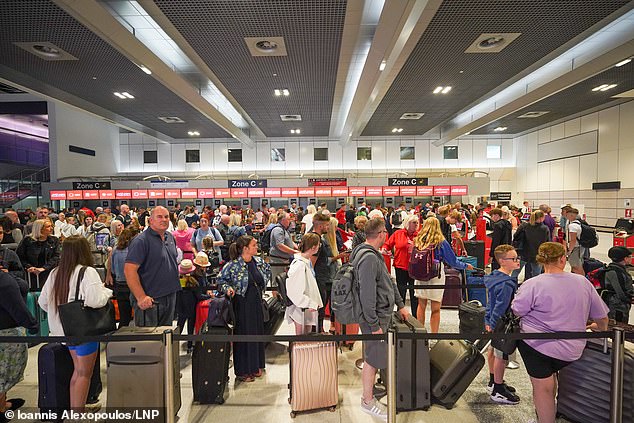 Swissport told Dispatches that it had also hired 4,100 people since January to try and mitigate delays. Pictured: A busy Manchester Airport

Swissport told the programme it was ‘sorry for our part in the disruption some people have experienced at Manchester Airport’.

‘We are doing everything we can to mitigate delays for passengers, including hiring more than 4,100 people since January,’ it added.

Wizz Air said ‘the safety and wellbeing of our passengers and crew is always our top priority’.

It said it operated an ‘industry-leading fatigue management system’ which was ‘regularly reviewed and monitored’ by aviation regulators.

Wizz Air told the Daily Mail it would ‘never compromise on safety’, adding that it had hired 400 pilots in the past nine months.

In a statement it said there were ‘no financial penalties’ for pilots if they reported that they were fatigued. 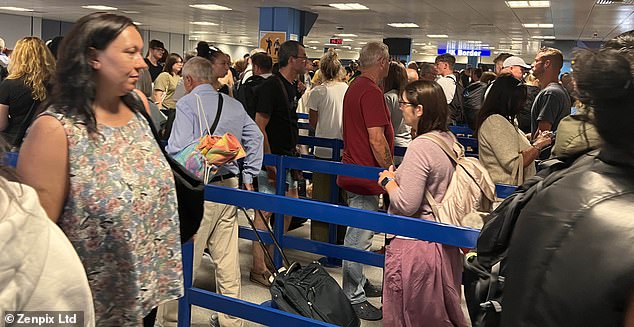 Manchester Airport – whose managing director, Karen Smart, resigned in April following weeks of chaos for travellers – stressed that the undercover filming was done around a month ago. Pictured: Passengers queue at Bordeaux to get back to Manchester Airport

‘If our pilots report fatigue and alternative pilots cannot be found, then the flight will be cancelled,’ it said. ‘We will not hesitate to cancel flights whenever necessary to guarantee safety.’

In response to the claims, a Department for Transport (DfT) spokesman said: ‘We’ve done everything within our power to support the aviation industry, including providing £8billion to protect jobs during the pandemic, but it’s now for the sector itself to make passengers can get away on their well-deserved summer holidays.’

The department said action had included accelerated security vetting checks, as well as a temporary amnesty on airport slots to allow airlines to plan ahead and prevent last-minute cancellations.

The DfT spokesman added: ‘These measures are clearly working and flight cancellations have recently fallen back to their 2019 levels following the changes which are providing passengers with more certainty.’ 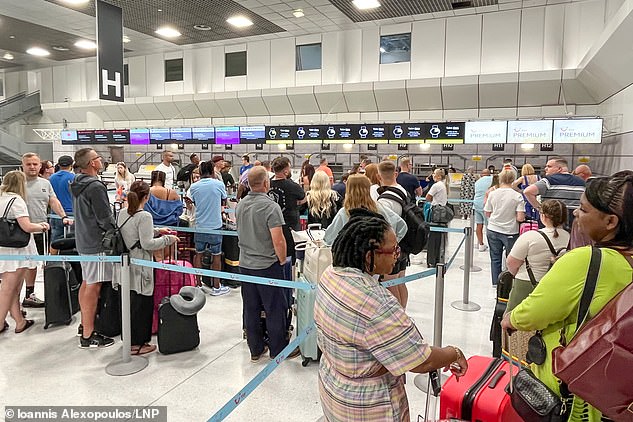 In a statement to the Daily Mail, Swissport stressed that delays were caused by ‘disruption from multiple sources’ and not just ground handlers.

Headcount at Manchester Airport had seen a net increase of 415 this year, it added.

The firm stressed it did not work with airlines which had experienced disruption at Heathrow or Gatwick.

Manchester Airport – whose managing director, Karen Smart, resigned in April following weeks of chaos for travellers – stressed that the undercover filming was done around a month ago.

It said the first week of the school summer holidays had seen 95 per cent of passengers pass through security in under half an hour.

Ground handling including check in and baggage is the responsibility of individual airlines, it added.