Contents hide
I. Chef, 67, is found guilty of sexually assaulting woman on Tube after using rush hour crush to ‘trap’ his victim in packed Central line carriage
I.I. Share or comment on this article:
I.II. Give This Article A Share:

By Brooke Davies For Mailonline

Francesco Longobardi (pictured), 67, was found guilty of one count of sexual assault after ‘trapping’ his victim in a rush hour train carriage

A chef who used a packed train carriage to ‘trap’ and press himself up against a young woman has been found guilty of sexual assault.

Francesco Longobardi, 67, of Bayswater, used the rush hour crush to sexually assault his victim in a ‘planning’ and ‘predatory’ way, Westminster Magistrates heard.

Longobardi, who is a chef at a restaurant in Knightsbridge, attacked his victim on the Central Line at Oxford Circus and continued for three stops until he was arrested by police at Lancaster Gate station.

Magistrate Maton said: ‘The length of time of this incident, the location was a crowded train, meaning the victim was, in effect, trapped.

‘It was also during the rush hour, and we find there was an element of planning in this.’

Tom Heslop, prosecuting, said: ‘The police’s report reflects the predatory nature of this offence and the planning that went into it.

The court heard that despite the busy train, officers were one metre away from Longobardi during the attack.

Mr Heslop said: ‘The victim looked uncomfortable. She was looking over her shoulders toward Mr Longobardi, and his hand kept going down to his groin area to rearrange himself.

‘She was squashed and she did not have any room to move away.

After a female officer identified herself, the victim burst into tears and made her realise ‘she wasn’t crazy’.

In a statement read to the court, the victim said she now feels ‘scared’ when leaving her house. 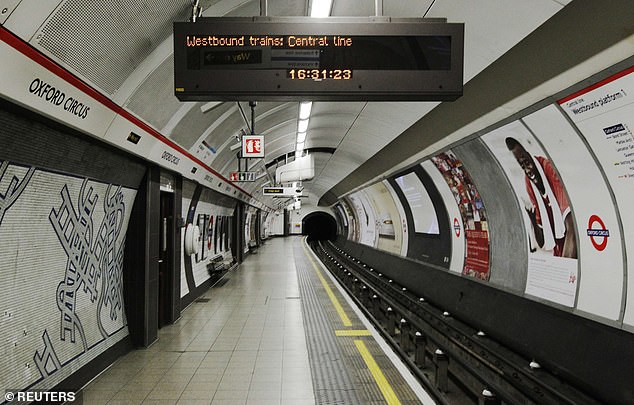 She said: ‘It made me feel scared and anxious that it’s happened to me.

‘I get nervous when I have to use public transport to get to university and I am suspicious of members of the public around me.’

Mr Heslop also said that forcing the victim to attend court by denying the charges and relive the ordeal was an aggravating factor, which has had a ‘clear psychological impact’ on her.

Longobardi received a 12-week prison sentence, suspended for 2 years and will be entered onto the sex offenders’ register for seven years.

He also received a community order including 60 days of ‘activities’, 200 hours of unpaid work and must pay a total of £1,003 in costs.