While Tory MPs have made sure they can set off on their long summer break by arranging to whittle down the field of leadership candidates to two in time for the start of the Parliamentary recess, I hear they have given the Queen a holiday headache.

Conservative grandee Sir Graham Brady said the new party leader would be announced on Monday, September 5. However, the Queen is due to be at her Scottish retreat, Balmoral, then.

It means the Tory leader would have to travel to the Aberdeenshire castle to meet the monarch for the first time and be asked formally to form a government. This meeting, or ‘audience’, is known as ‘kissing hands’. After their appointment, the new Prime Minister heads straight to 10 Downing Street. 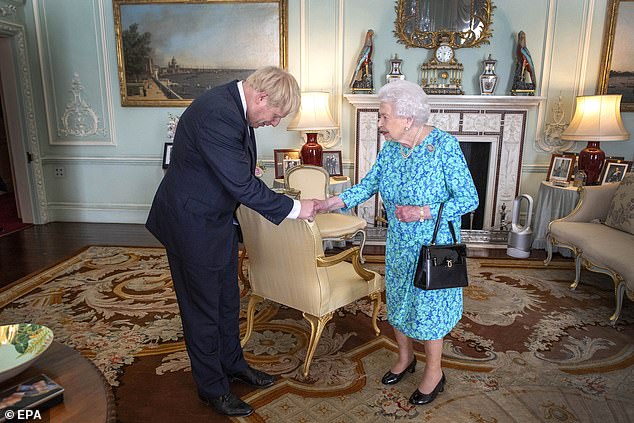 But it’s more likely that the Queen would be expected to return from Balmoral to Buckingham Palace or Windsor, so the process of entering Downing Street was not delayed.

‘There seems to have been no thought given to the Queen’s circumstances,’ a royal source tells me. ‘Do the politicians seriously expect a 96-year-old woman to make an 800-mile round-trip for a ten‑minute audience?’

According to one reporter, the monarch told Boris Johnson, ‘I don’t know why anyone would want the job’ when they met for the first time in July 2019. The idea of the Queen asking the new PM to form a government via a phone call or video conference would be unprecedented. However, the vast majority of her weekly audiences with Boris have been on the phone since the pandemic struck.

Perhaps, she could ask Prince Charles to do the honours? After all, he did step in at the State opening of Parliament. 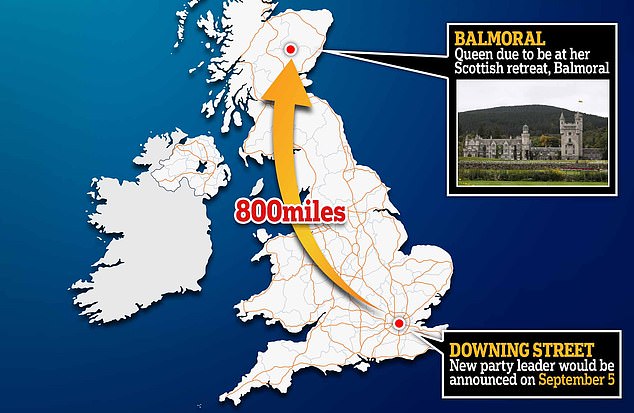 The new party leader would be announced on Monday, September 5 but the Queen is due to be at her Scottish retreat, Balmoral, then

To complicate matters further, Boris and his wife, Carrie, are expected to be invited to Balmoral to stay with the Queen on the weekend of September 3 and 4, as she likes to take PMs to the Braemar Gathering, of which she’s Chieftain. Her Majesty and Prince Philip liked nothing more than watching contestants at the Highland Games toss the caber and throw the hammer.

Princess Beatrice and her property developer husband, Edoardo Mapelli Mozzi, had a chance to catch up on all the gossip from Montecito when they went out with one of the Duchess of Sussex’s closest pals. 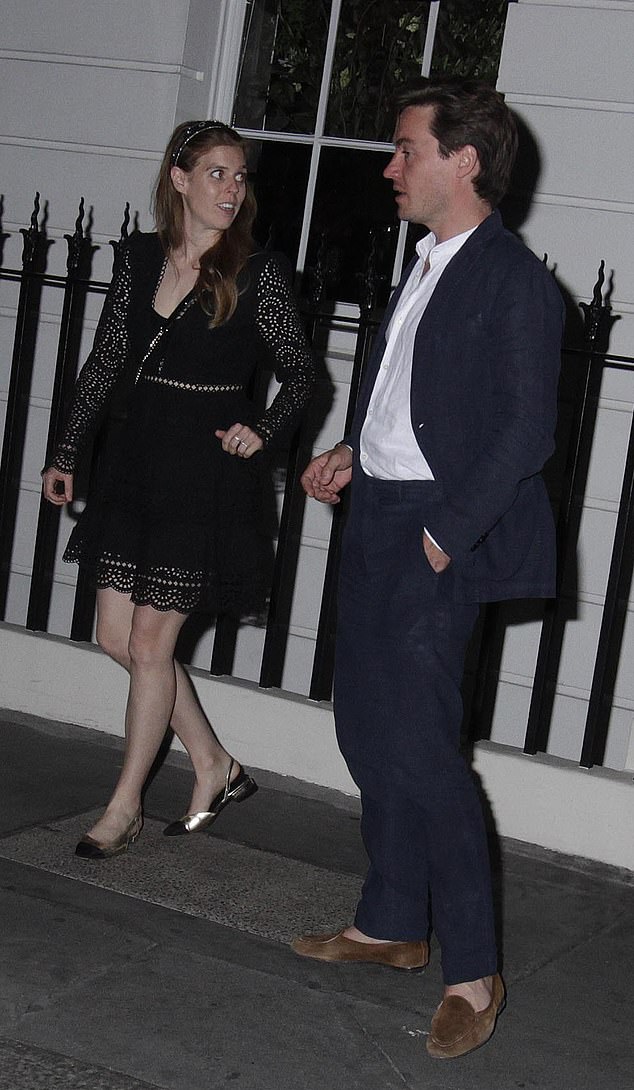 While most of the Royal Family appear to have become estranged from Harry and Meghan since they moved to the U.S., Beatrice and her sister, Eugenie, have kept close ties.

Comedian Stephen Merchant persuaded Hollywood legend Christopher Walken to star in his BBC1 series The Outlaws by claiming that Bristol was just like California. Merchant, 47, who’s from the West Country city, says of Walken, 79: ‘When I met him in America to try to lure him on to the show, he said: ‘What’s Bristol like?’ And I said: ‘Well, it’s on the water and it’s quite hilly and there’s a big suspension bridge, it’s sort of artsy . . . it’s exactly like San Francisco.’ And the good thing was, ‘cos we were filming in Covid, he couldn’t actually explore. So, as far as he’s concerned, it IS exactly like San Francisco.’

Sad news for the Duke and Duchess of Cambridge: antenatal teacher Christine Hill, who prepared them for the birth of Prince George, has died aged 74.

‘She will be achingly missed,’ says a spokesman for the obstetric physiotherapist’s family. ‘Her feisty, amusing, straightfoward demeanour won her many friends.’

Mrs Hill held discreet classes for her famous clientele in the conservatory of her home by the Thames in West London. Catherine is understood to have had one-to-one sessions with Mrs Hill there, including one with Prince William.

One of his most important tasks was to learn how to fasten the baby carrier in the back of their car — a challenge for any first-time father.

But William did it with aplomb in front of the world’s Press when the couple left the private Lindo Wing at St Mary’s Hospital in London’s Paddington after the birth of George. 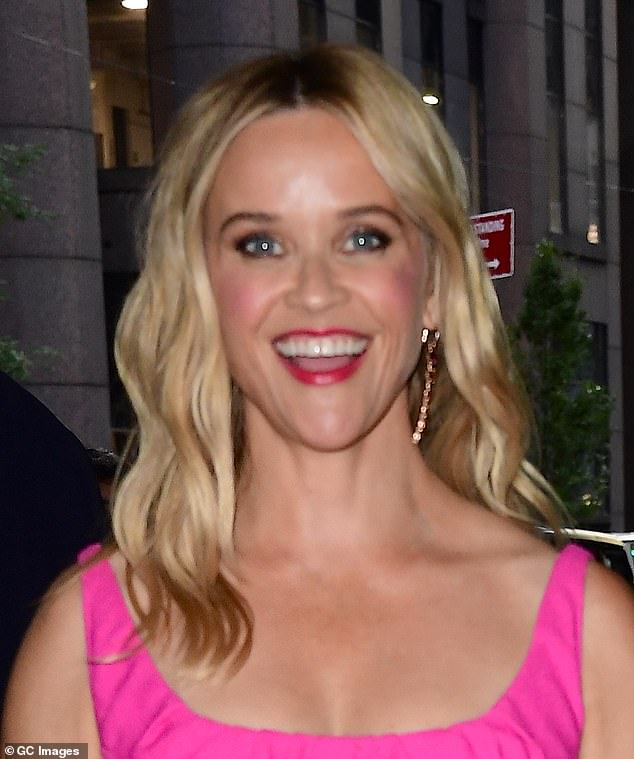 The Sky executive’s daughter, who played Marianne in the BBC’s hit coming-of-age drama, appeared on the red carpet at the premiere of her new film, Where The Crawdads Sing, in New York.

Privately educated Daisy, 24, who wore a bespoke Gucci dress embroidered with flowers, has the leading role in the big-screen adaptation of Delia Owens’s best-selling murder-mystery novel.

American star Reese Witherspoon, whose production company made the film, believes it will turn Daisy into a household name in America.

‘She came to visit the set, which was really exciting,’ Edgar-Jones says of her first meeting with the Legally Blonde star (pictured below)

Lord Cobbold, the colourful aristocrat who introduced rock concerts to his Hertfordshire estate, Knebworth, is to be given a suitably rousing send-off. I hear that a party for family and close friends will be held at Knebworth House on what would have been his 85th birthday tomorrow.

The theme will be Those Were The Days, and it will feature a rendition of the song by the daughter of Welsh singer Mary Hopkin, who had a No 1 hit with it in 1968.

SAS hero Christian Craighead — who confronted and killed jihadi terrorists who’d seized a hotel in the Kenyan capital Nairobi, freeing scores of hostages, in 2019 — has found a new role. I hear he’s now giving American teachers free shooting lessons following the recent school massacre by a teenager in Uvalde, Texas. ‘The USA has found itself in a cultural and mental health crisis, putting people in certain areas and in certain professions at risk,’ he says. ‘If people are exercising their constitutional rights [to bear arms], I feel it’s only right that I teach them the skills to use them in high-stress situations.’

Sir Michael Caine’s wife insisted he’d soon be back ‘dancing’ after recent surgery, so it’s good to see the Hollywood legend out and about in Mayfair.

The double Oscar winner, 89, had an operation for spinal stenosis earlier this year and was later seen using a walking frame.

However, now he’s using just a walking stick for support, as was seen when he went for dinner with Lady Caine, 75, at Scott’s seafood restaurant.

Sir Michael does have cause to celebrate: I revealed last week that he’d finally sold his seven-bedroom Surrey mansion for £3.5 million. He bought the property, which has its own swimming pool, hot tub, gym and cinema, for £1 million 22 years ago. Not a lot of people know that . . .