A multi-millionaire hedge fund tycoon who is building ‘a global destination’ on a Scottish island that was the inspiration for The Wicker Man is risking falling foul of planners.

Tanera Mòr in the Summer Isles was bought in 2017 by English hedge fund tycoon Ian Wace – who is married to model Saffron Aldridge – for £1,695,000.

Mr Wace, who is worth £680m according to the latest Sunday Times Rich List, is overseeing a six-year programme of improvements on Tanera Mòr which could see it become an idyllic retreat capable of hosting up to 60 paying guests.

But now his company, Summer Isles Enterprises Ltd, has applied for permission for a mechanics building and a multi purpose building which are already under construction.

Applications to Highland Council said work began on March 1 on the building.

Asked why work began ahead of the application, the company’s agents simply wrote: ‘applicant began construction prior to submissions being made.’

As for the mechanics’ building plan, a council officer said records indicated that part of the site had a historic use as a gravel pit and quarry, which may have resulted in land contamination if infilled. A detailed site history should be provided. 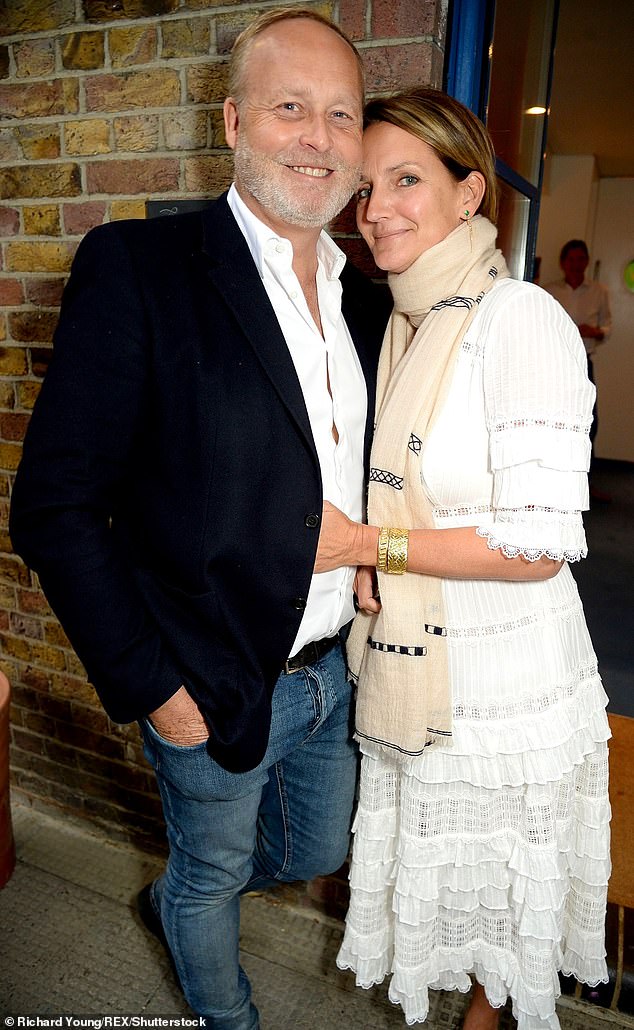 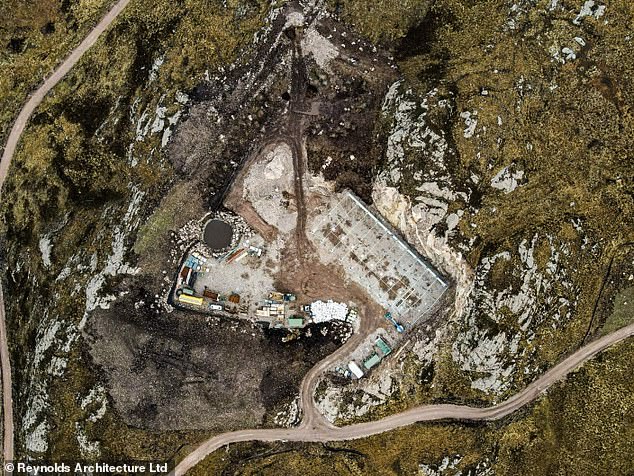 As for the mechanics’ building plan, a council officer said records indicated that part of the site had a historic use as a gravel pit and quarry (pictured), which may have resulted in land contamination if infilled. A detailed site history should be provided

They are recommending as a condition that no development should commence until a scheme to deal with potential contamination on the site has been submitted and agreed in writing by the planning authority.

They added: ‘I advise the applicant be contacted with a request that they provide, by way of an assessment of potential contamination issues, site history information concerning the past use of the site.

‘Please forward any such site history which you receive to the Contaminated Land Team so that we are able to advise if it is sufficient to demonstrate that the site is suitable for use.

‘Provided the site history is detailed, and does not indicate former potentially contaminative land use, a site investigation may not be required.’

Architects said in a design statement that the island was once a port for herring fishing and suffered during the decline of the industry. The two settlements were known as Ardnagoine and Garadheancal. 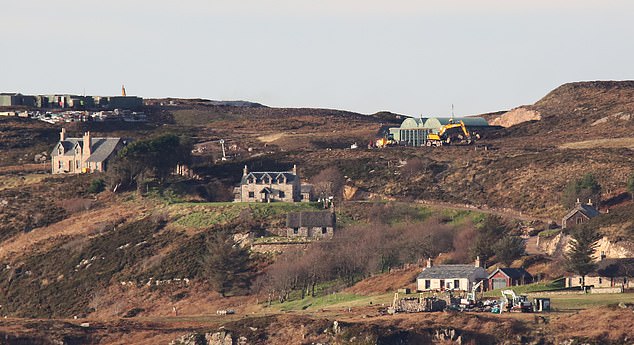 Mr Wace, who is worth £680m according to the latest Sunday Times Rich List, is overseeing a six-year programme of improvements on Tanera Mòr (pictured) which could see it become an idyllic retreat capable of hosting up to 60 paying guests

‘Since 2017, the redevelopment of the island has involved the creation of several roads in the form of tracks comprised of crushed and compacted stone from the island,’ said the statement.

‘At the start of the project there were nine inhabitable dwellings. Most of these dwellings have been adapted, often having dormers and porches added at a later date.

‘All properties will be taken back to their original stone with any modern alterations or extensions removed or improved.

‘The plan for Tanera Mòr over a period of six years is to restore and regenerate the physical ruins and structures that was inherited when the project started in April 2017.

‘There is currently a team of over 100 people employed on the project full time. This project respects the natural beauty and tranquillity/history of the island.

‘The island is on course to become a global destination providing the highest level of service to its clientele. 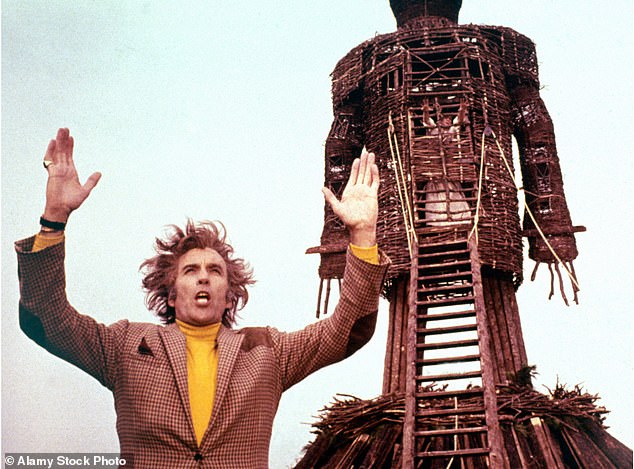 The pagan-cult island of Summerisle is featured in the film The Wicker Man and is thought by some film critics to be set in the Wester Ross archipelago, although the movie itself was filmed in Galloway and Plockton

‘A significant investment is earmarked for development to bring the island facilities in line with what is necessary to unlock its full potential.

‘One end of the island is close to completion, various sites elsewhere are still very much in the construction phase.

‘Whilst the focus has always been on the restoration of the existing ruins, there have also been new buildings proposed.

‘Traditional building methods will be used where possible to reflect the existing examples visible across the island.

‘The materials used on the island are very consistent, with stone, tin and reclaimed timber being most prominent.

‘The Quarry was used to produce materials for our restoration projects across the island.

‘Now that it is no longer in use, an opportunity was realised that it would be an ideal location for the long term island facility buildings due to its location, both away from the occupied houses and almost entirely out of view. 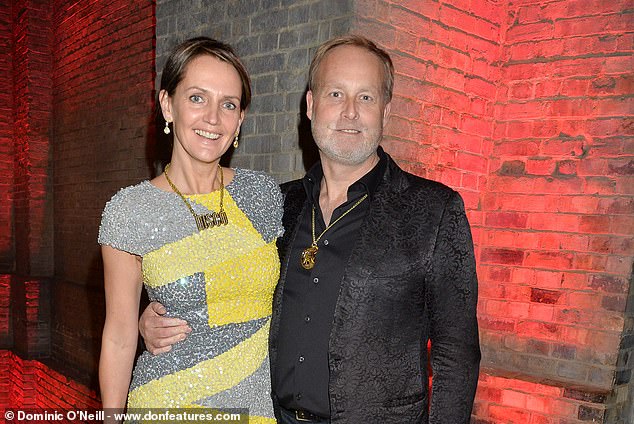 Mr Wace and his wife pictured at a Night of Disco in aid of Save The Children held at The Roundhouse, Chalk Farm Road, London on 5th March 2015

‘The purpose of the design process at The Old Quarry is to develop a capable, integrated and creative solution for a commercial hub to support the needs of the island.

‘The core objectives of the development are to create a self-sufficient and sustainable community on the island and ensure the special quality of the natural environment is not just protected but also enhanced.

‘The construction projects situated within the Quarry will all have an industrial element to them as this will remain a workers yard post construction.

‘Using reclaimed brick, tin and larch panelling, there will be plenty of design qualities that will link these quarry based projects with the main examples of restoration projects completed elsewhere on the island.’

The document also covers four separate applications being made for the quarry site including the utility building, gatehouse, mechanics shed and stores shed.

The utility building is now set to serve as the main commercial hub for the Island. It will be used for the company offices as well as having a large multipurpose space. 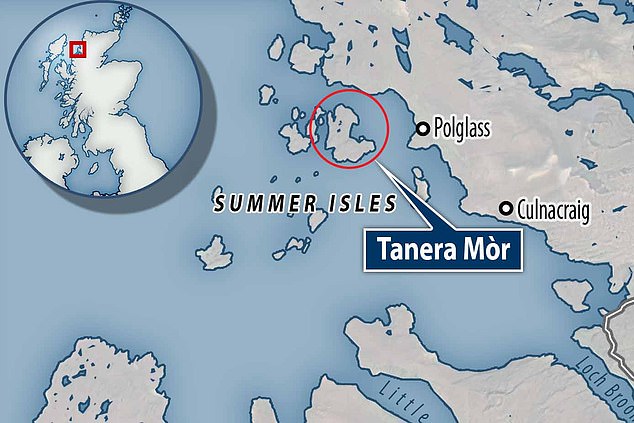 Further to that there will be plenty of staff accommodation and a large mess/canteen for all the people who work within the Quarry.

Mr Fogle’s team said the star went on the island as part of a commissioned TV series.

They said: ‘Mr Wace’s project is part of that series. [Mr Fogle] is also writing a book on the project.’

The pagan-cult island of Summerisle is featured in the film The Wicker Man and is thought by some film critics to be set in the Wester Ross archipelago, although the movie itself was filmed in Galloway and Plockton.

Tanera was the only Scottish island to operate a year-round private postal service.

A letter posted on Tanera must therefore bear two stamps: a Summer Isles stamp to carry it from Tanera to the mainland post office in Achiltibuie and a Royal Mail stamp for the rest of its journey.