Helen Skelton admitted she feels ‘really stupid’ after falling for an internet banking scam in 2019.

The Countryfile presenter, 38, lost £70k of her life savings after answering a few questions during a ‘dodgy’ phone call from what she believed was her bank.

The star recalled the experience as she partnered up with Lloyds Bank to discuss her fears for her children’s online safety. 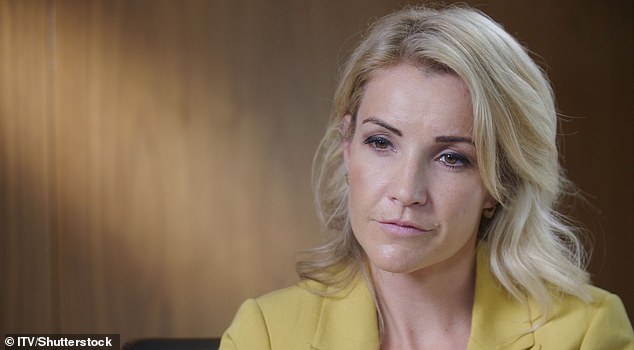 Candid: Helen Skelton admitted she feels ‘really stupid’ after falling for an internet banking scam in 2019

Talking about her son, Helen said: ‘The notion of him chatting to his mates online scares me a bit

‘I don’t know that world and we’ve all heard plenty of things that could go wrong.’

Helen then explained how falling victim to a scammer is ‘easily done’ as everyone spends a lot of their lives online.

Helen penned: ‘I personally know the pain of being defrauded, so it is incredibly important to me that my children are equipped to spot a scam, even in the seemingly harmless environment of a video game.’ 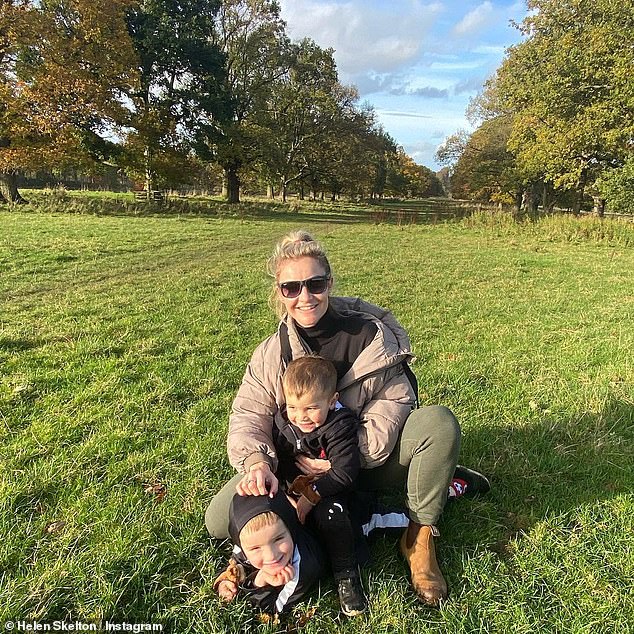 Scary: The Countryfile presenter, 38, lost £70k of her life savings after answering a few questions during a ‘dodgy’ phone call from what she believed was her bank 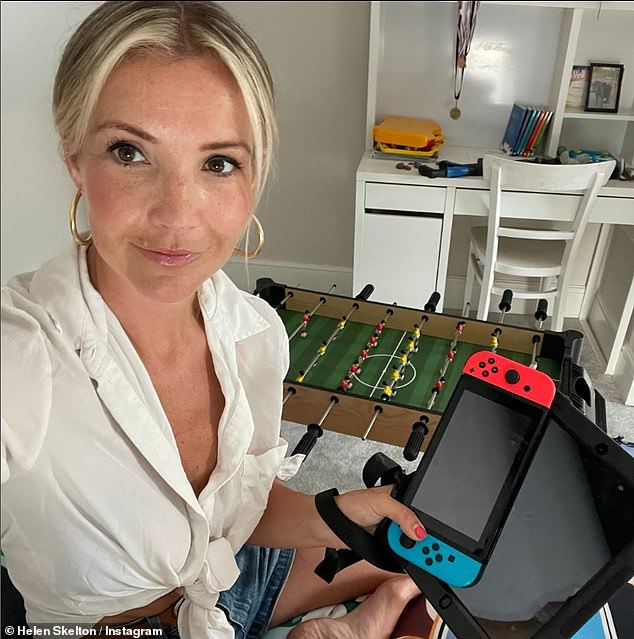 Opening up: The star recalled the experience as she partnered up with Lloyds Bank to discuss her fears for her children’s online safety

The TV and radio presenter, who is mother to sons Ernie and Louis with her ex husband, England rugby league player Richie Myler, previously revealed was looking after her children when she received a ‘dodgy’ phone call from what she believed was her bank.

During an appearance on ITV’s Lorraine three years ago, Helen revealed the scary incident.

She said: ‘I got phoned up by the bank, told something dodgy had been going on with my account. A week later, £70,000 had gone. All gone. And it was just a few questions over the phone.’

The former Blue Peter presenter added: ‘I had one kid up a tree, one wrestling the dog, another dog throwing up the kids’ birthday cake, then they phoned me from the bank and said, “Oh, something has gone on.”

‘You don’t question your bank.’ 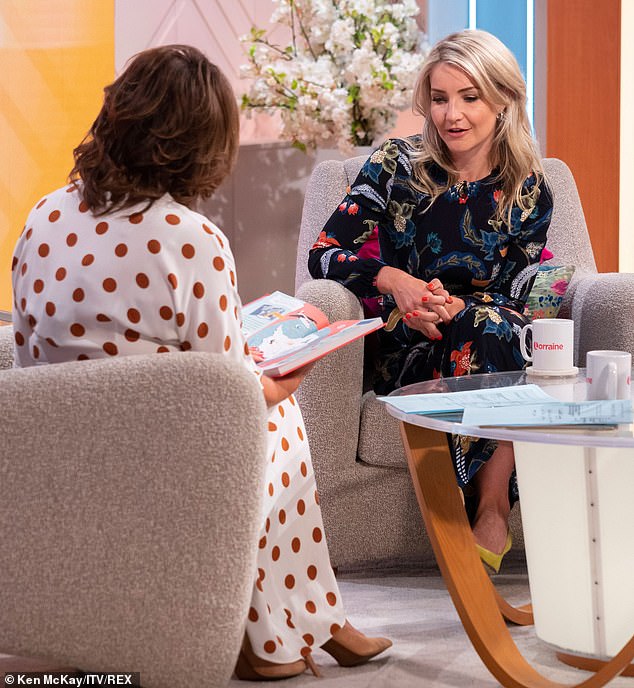 Shocking: Helen revealed in 2019 that she was scammed out of a staggering £70,000 after she answered a fake phone call she thought had come from her bank

The cold-call phone scam typically involves fraudsters deceiving people into believing they are speaking to a police officer, a member of bank staff or a representative of another trusted company or agency such as a Government department.

The fraudsters convince the victims that they have been a victim of fraud and will ask for personal and financial information in order to gain access to their accounts.

Another scam involves the fraudster – posing as a police officer or a member of bank staff – saying that there has been a fraudulent payment on the victim’s card and it needs to be replaced.

They say they will send a courier to collect the card and arrange for a new one. They then have the victim’s card, name and home address. 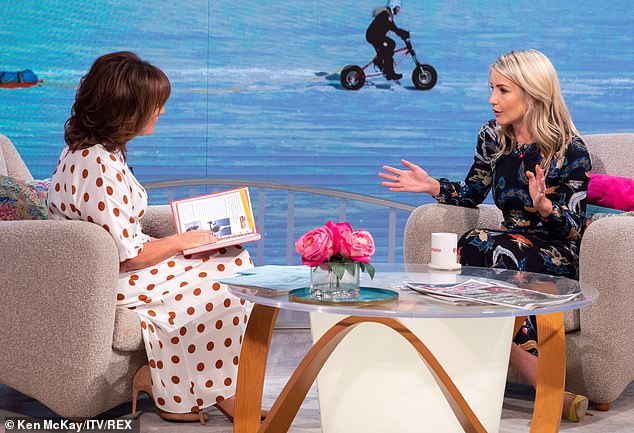 Speaking out: Helen explained that she lost her savings through the phone scam, and insisted viewers are ‘naive’ to think they won’t fall for such a ploy

Helen announced earlier this year she had split from her rugby player partner, after eight years of marriage.

It was recently revealed Richie has begun a new relationship with the daughter of the multi-millionaire President of the Leeds Rhinos club he plays for.

Helen is said to feel ‘bewildered’ by the breakdown of her marriage to Richie whose new partner is Stephanie Thirkill, 32. 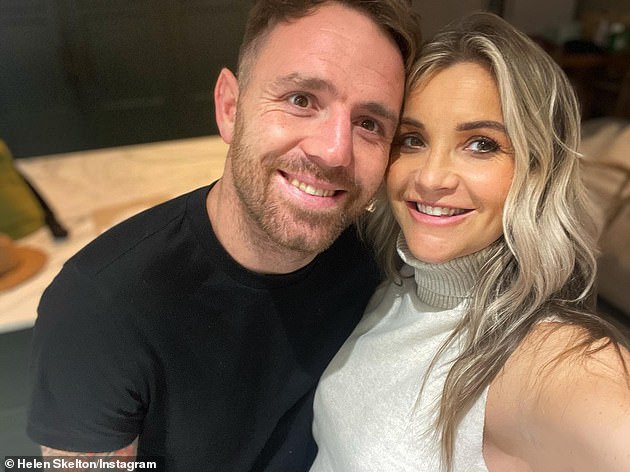 Separated: Helen split from husband Richie, 31, in April after eight years of marriage (pictured in February)

A source close to the couple told MailOnline: ‘Helen is absolutely devastated. Now she is contemplating life without him while he has moved on with his new partner.’

‘Richie is insisting there was no crossover, that he began the romance with Stephanie after their marriage collapsed, but Helen feels let down. They are still married, and their baby is literally four months old.

‘She thought their marriage was safe and secure and is totally shocked by what’s happened.’

Contents hide
I. The rise of ‘vishing’ and how to protect yourself if you’re targeted by a scammer
II. Give This Article A Share:

How to protect yourself from phone call scams

Keeping ahead of the scammers may seem like an impossible task, but Age UK has a number of tips that can help keep you safe if you receive an unwelcome call.

1. Don’t reveal personal details. This includes any bank details or your pin number.

2. Hang up. If you’re feeling threatened or think someone is being aggressive, put down the phone.

3. Ring the organisation. If the person is who they say they are you can always ring the company or bank and check.

4. Don’t be hurried. Experienced scammers will try and get you to do things quickly by talking about a time-limited offer.

According to figures released in September 2018,  customers are losing up to £1million a day in bank transfer scams.

Figures revealed the scale of the fraud epidemic. In the first six months of the year £145million went missing – almost £1million a day and 50 per cent more than in the same period of 2017.

The figures show for the first time the amount of money lost to different types of scams. Around a quarter of the total losses – £36.6million – was a result of impersonation fraud. This is where crooks pose as companies people trust such as their bank, solicitor, telecoms provider, HMRC or the police. Victims are then convinced to transfer their money into another account under the guise of keeping it safe. They almost never see it again.

Others are tricked into making payments to criminals posing as conveyancing solicitors, builders and other tradespeople.

The ruses used by the fraudsters can take a number of guises to try and get you to part with your money.

One of the most common methods is known as ‘vishing’ which is a telephone scam that involves  someone impersonating an individual from a bank or other organisation to try and procure your personal information for private gain.

A method used frequently this year has been criminals posing as HMRC officials to select victims from the BT online phone directory and threaten them with jail unless they pay non-existent debts.

HMRC received 60,000 reports of landline repayment fraud cases in the six months to January – 360 per cent up on the previous half-year. However, not all the victims will have come forward.

More than one in ten frauds reported in the UK involves Indian call centres and over half originate abroad, according to Action Fraud, the national fraud and cyber reporting centre.