A hockey player from an adult league in Canada straight-up kicked an opponent in the face with his skate during a mid-game scuffle … and the incident was so reckless, police now tell TMZ Sports they’re investigating it all.

The scary scene happened during an Adult Safe Hockey League game on July 29th at Scotia Barn in Burnaby.

You can see in the video from the arena, two players from opposing teams were fighting each other in the 3rd period … when, suddenly, one of the guys appeared to intentionally kick the other with the blade of his skate.

The player wearing a #90 jersey immediately fell onto the ice and covered his face. His teammates, meanwhile, went after the kick suspect before refs ultimately intervened. The guy was issued a penalty, and ejected from the game.

The Burnaby Royal Canadian Mounted Police tells us the victim received medical treatment for injuries he suffered from the kick — adding that they’ve since launched an investigation. 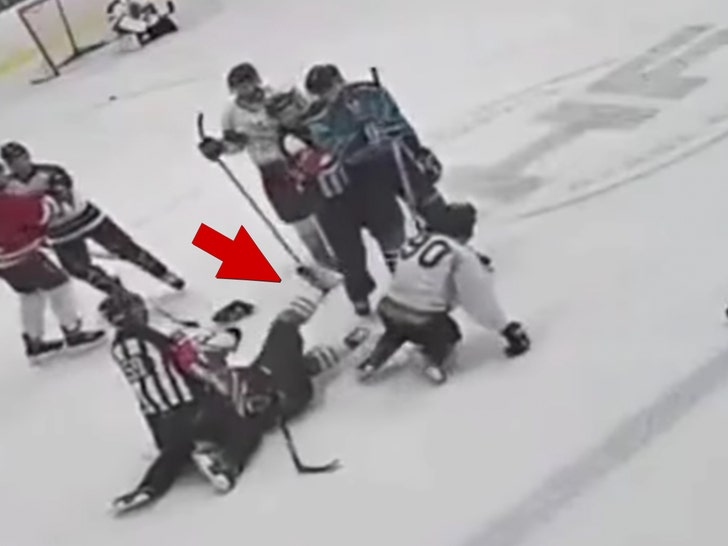 “Burnaby RCMP is continuing to investigate the circumstances and actions that led to the player’s injuries,” the officials said.

“Burnaby RCMP is in possession of video showing one angle of the incident, which has been collected as evidence. Investigators are still in the process of speaking with players and witnesses.”

In addition to the ejection, the kick suspect also received an indefinite suspension from the ASHL, which said in a statement, “The conduct and on-ice behaviour depicted in the video in no way aligns with the values of our league and the rules of the game.”

“While we acknowledge that the total prevention of incidents like this is not possible, we will continue to ensure that such incidents are treated with appropriate supplemental discipline, including the potential for a player to be permanently expelled from the league.”