Kate Ferdinand has confirmed the loss of her unborn second child with husband Rio, twelve weeks into a previously unannounced pregnancy.

The former TV personality, 31, shared the news with Instagram followers, many of whom were unaware of her pregnancy, in a short post on Wednesday evening.

Kate, already a parent to 20-month old son Cree with Manchester United and England legend Rio, revealed she was admitted to hospital after a routine scan failed to detect the baby’s heartbeat. 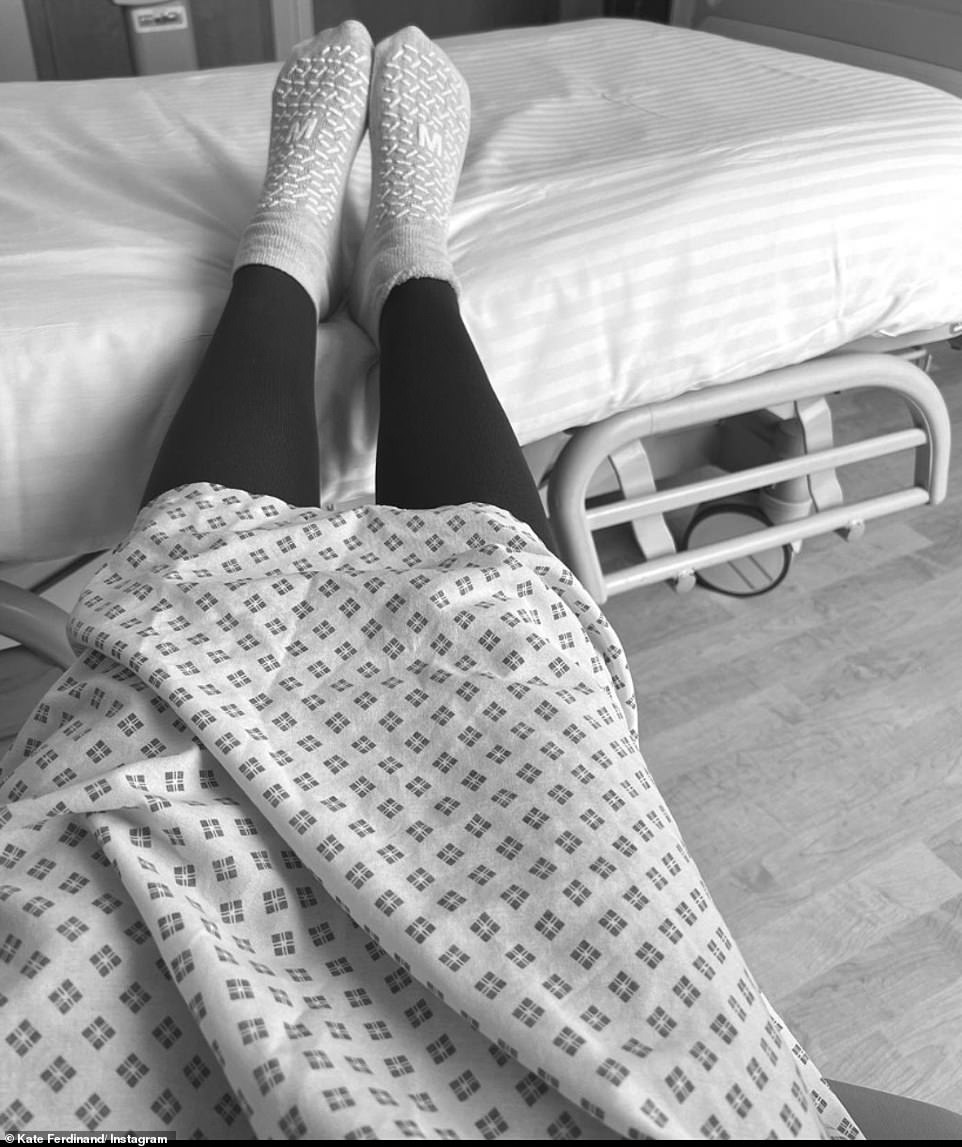 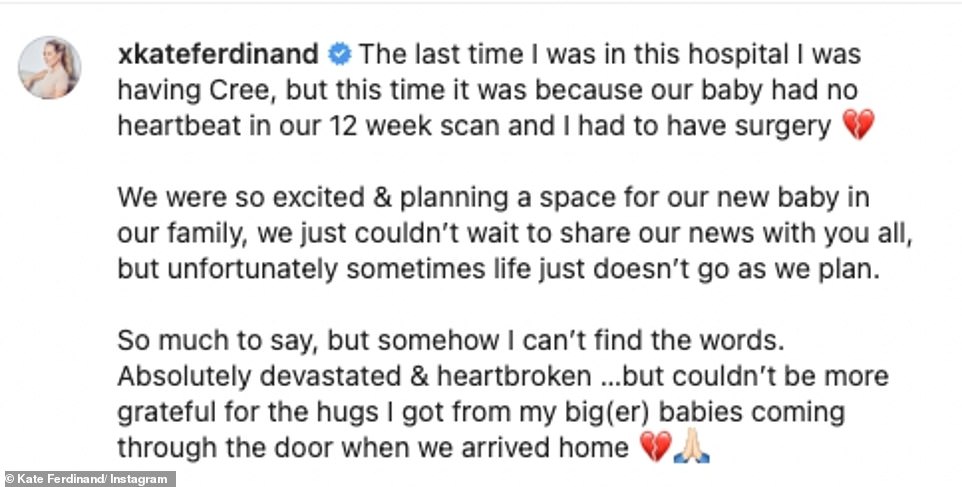 Devastated: Kate Ferdinand has confirmed the loss of her unborn second child with husband Rio, twelve weeks into a previously unannounced pregnancy

She wrote: ‘The last time I was in this hospital I was having Cree, but this time it was because our baby had no heartbeat in our 12 week scan and I had to have surgery.

‘We were so excited & planning a space for our new baby in our family, we just couldn’t wait to share our news with you all, but unfortunately sometimes life just doesn’t go as we plan.

‘So much to say, but somehow I can’t find the words. Absolutely devastated & heartbroken …but couldn’t be more grateful for the hugs I got from my big(er) babies coming through the door when we arrived home.’

Former The Only Way Is Essex co-stars Samantha Faiers and Chloe Lewis were quick to send their support in the comments, with Samantha writing: ‘This is heartbreaking, sending you lots of love and strength.’ (sic)

Chloe added: ‘Sending my love to you,’ while ex Geordie Shore star Vicki Pattison said she was “so so sorry.” 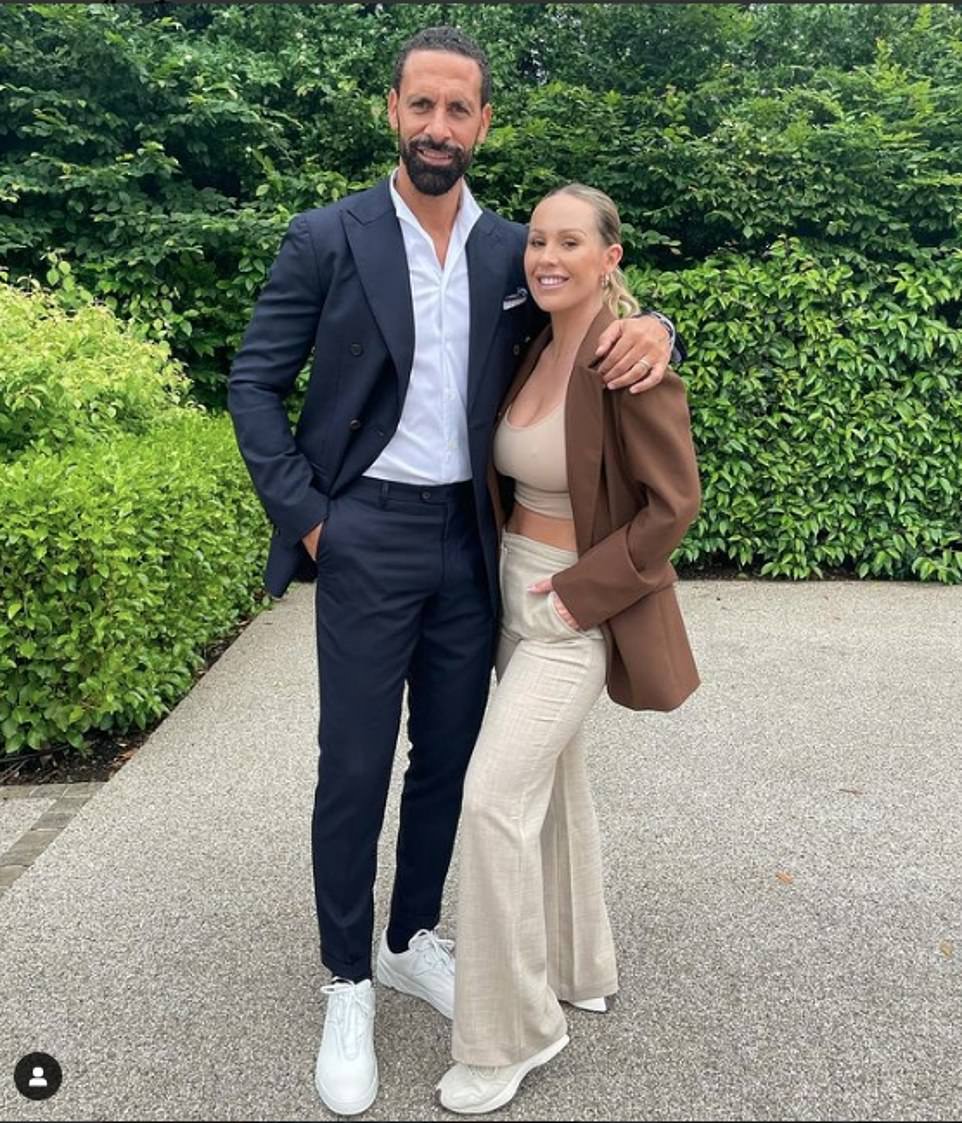 Couple: In June, Kate was said to be ‘torn’ over her decision to have another child with Manchester United and England legend Rio, 18-months after they welcomed their son Cree

Support: Taking to Instagram hours later former Coronation Street actress Michelle tenderly wrote: ‘So sorry Kate. Sending you so much love’ as she was joined by many famous friends

Appearing on Instagram in June, Kate – who did not publicly announce her pregnancy – gave no indication that she was carrying a child while posing for selfies in a bralet and miniskirt.

The former TOWIE cast-member shared the photos during a dinner date with her mother Jacqueline and her infant son, alongside the accompanying caption: ‘A fabulous time spent with family & friends.’

Earlier that month she was said to be ‘torn’ over her decision to have another child with Rio, 18 months after they welcomed Cree.

A source revealed to Heat magazine at the time: ‘Kate really struggled with having a newborn. But as the kids get older, she’s starting to miss the baby phase. 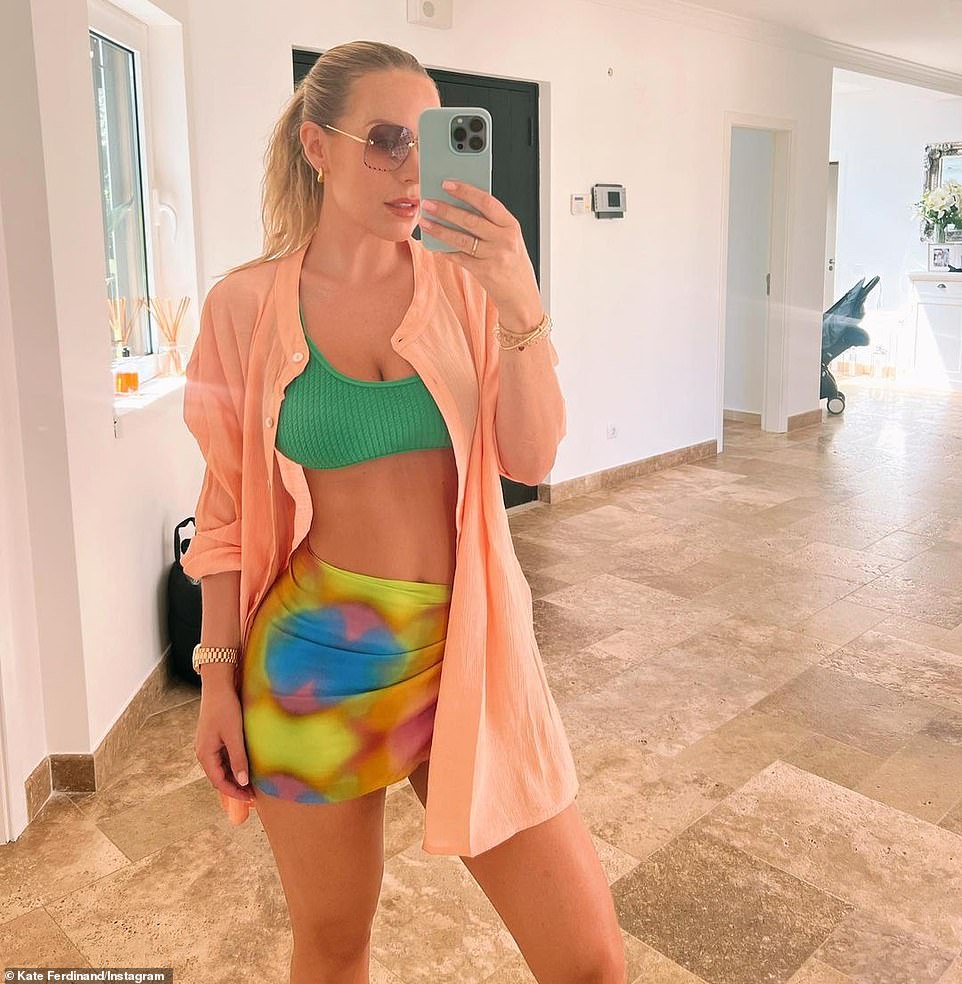 Recent post: Appearing on Instagram in June, Kate – who did not publicly announce her pregnancy – gave no indication that she was carrying a child while posing for selfies in a bralet and miniskirt 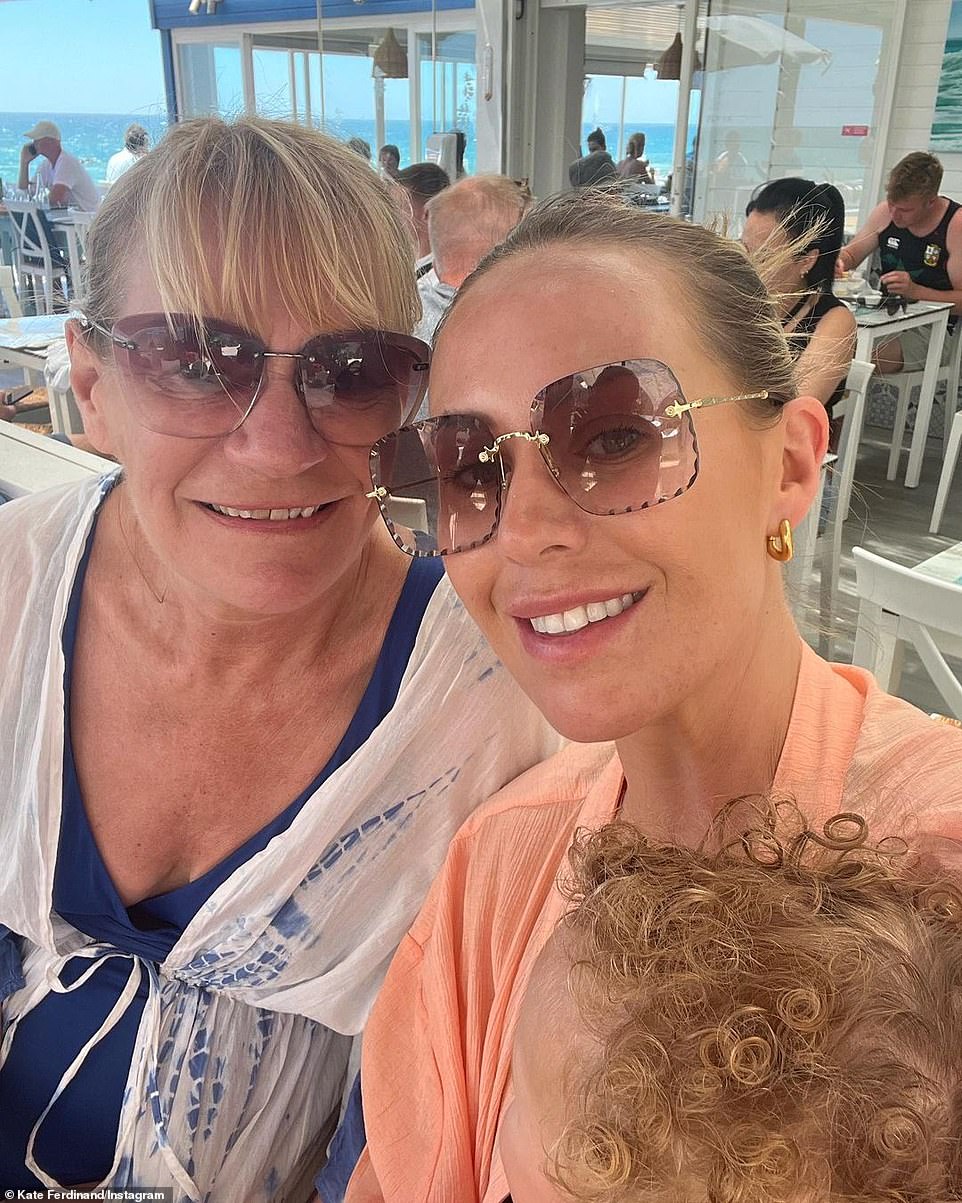 Happy times: The former TOWIE cast-member shared the photos during a dinner date with her mother Jacqueline and her infant son

‘If she does have another child she doesn’t want there to be a huge age gap. But at the same time, she feels like she’s just getting her life back.’

Kate began dating footballer Rio in 2017 and they married during an extravagant wedding ceremony in Turkey in 2019.

They welcomed their first child together in December 2020, via emergency C-section – with Kate later detailing the ‘traumatic birth’ on Instagram.

Alongside a photo of her bruised body, she explained: ‘I wanted to share this with you. This is me… and let me add this is a much better version of me than the last 10 days.

‘After having an emergency c section, and a bit of a traumatic birth I’ve been completely wiped out.’ 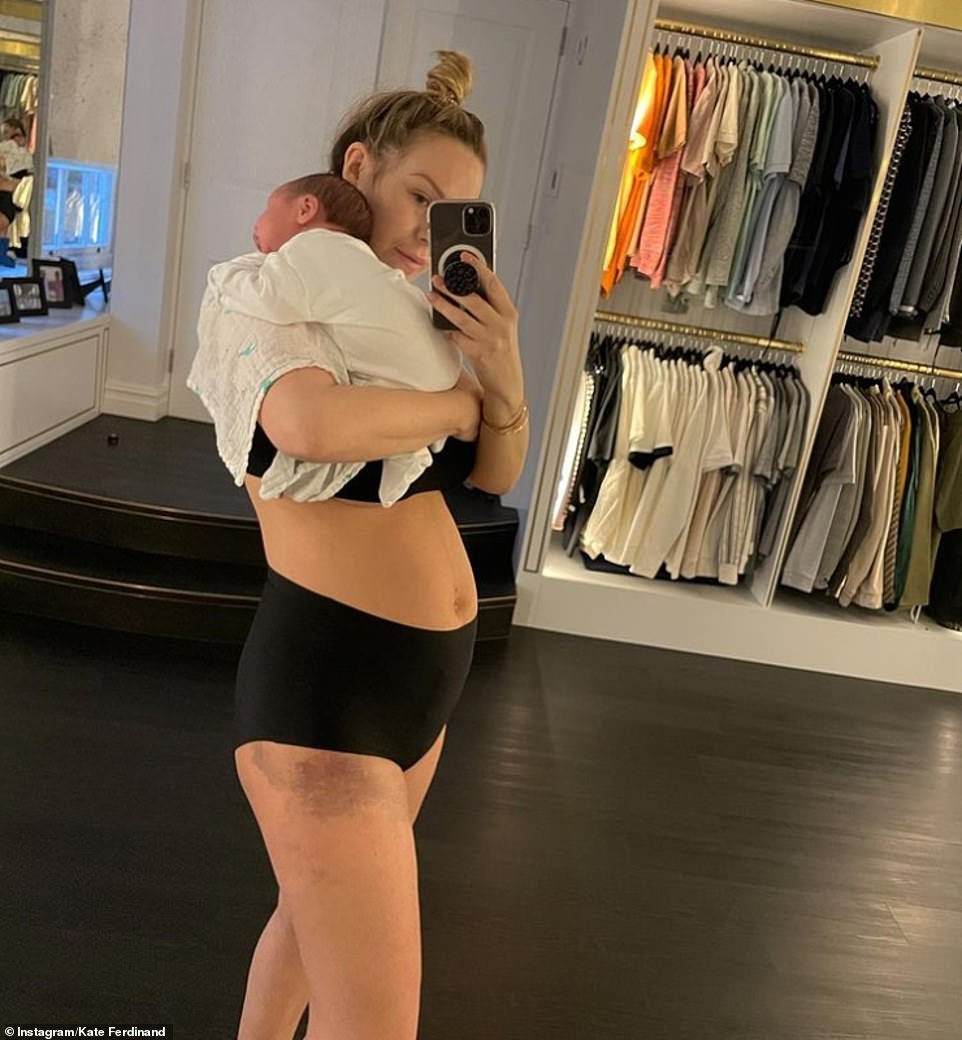 Emotional time: Kate and Rio welcomed their first son together, Cree in December 2020, via emergency C-section – with Kate later detailing the ‘traumatic birth’ on Instagram 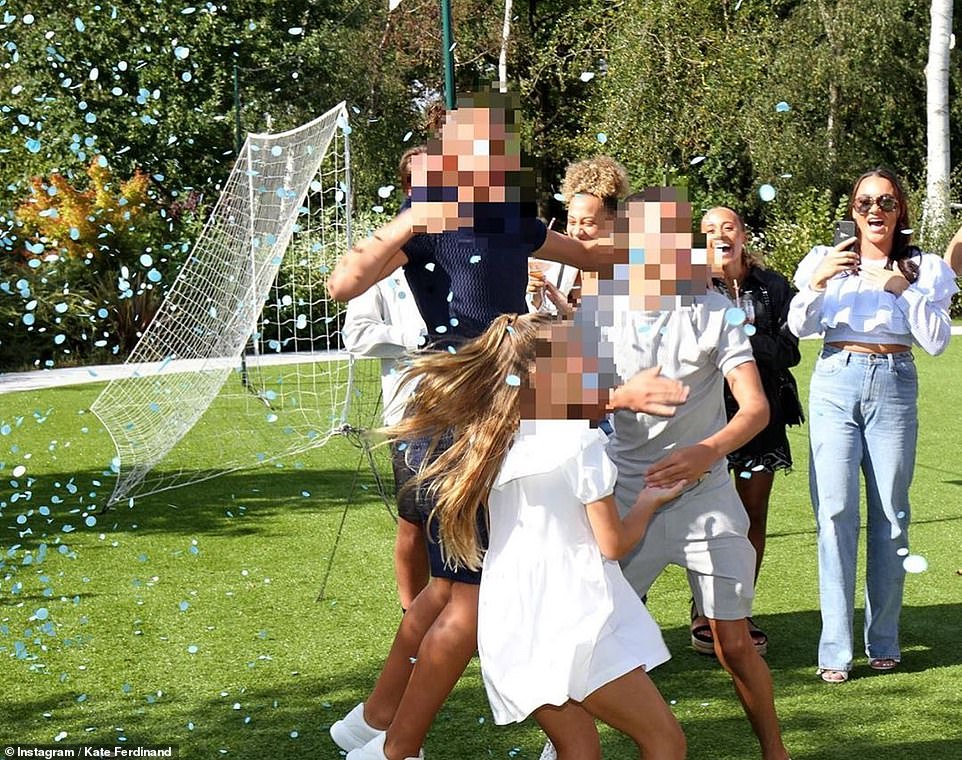 It’s… a boy! Kate and Rio shared a gender reveal video after publicly confirming her first pregnancy with the retired footballer

‘The happiness has been overwhelming but so have the tears and emotions, I’ve felt like I can’t do what I’m meant to be doing with Cree as I haven’t been able to change or feed him consistently which has had me feeling all types of guilt, for Cree, Rio & that I can’t be doing what I normally do for the kids.

‘It’s a whirlwind I just wasn’t expecting … but at the same time the most perfect whirlwind.’

Kate revealed she was expecting her first child in an Instagram video of the moment she told step-children Lorenz, 15, Tate, 13 and 11-year-old Tia about her pregnancy.

The former reality TV star is step-mother to retired footballer Rio’s three children from his first marriage to Rebecca Ellison, who passed away aged 34 in 2015 after battling breast cancer.

Captioning the post, she wrote: ‘The crazy house is about to get a little bit crazier … every time I watch this it makes me cry, the best reaction. Baby Ferdy we are all so excited to meet you.’

Kate and Rio later shared a fun collection of videos where their family discovered they were expecting a baby boy during a gender reveal. 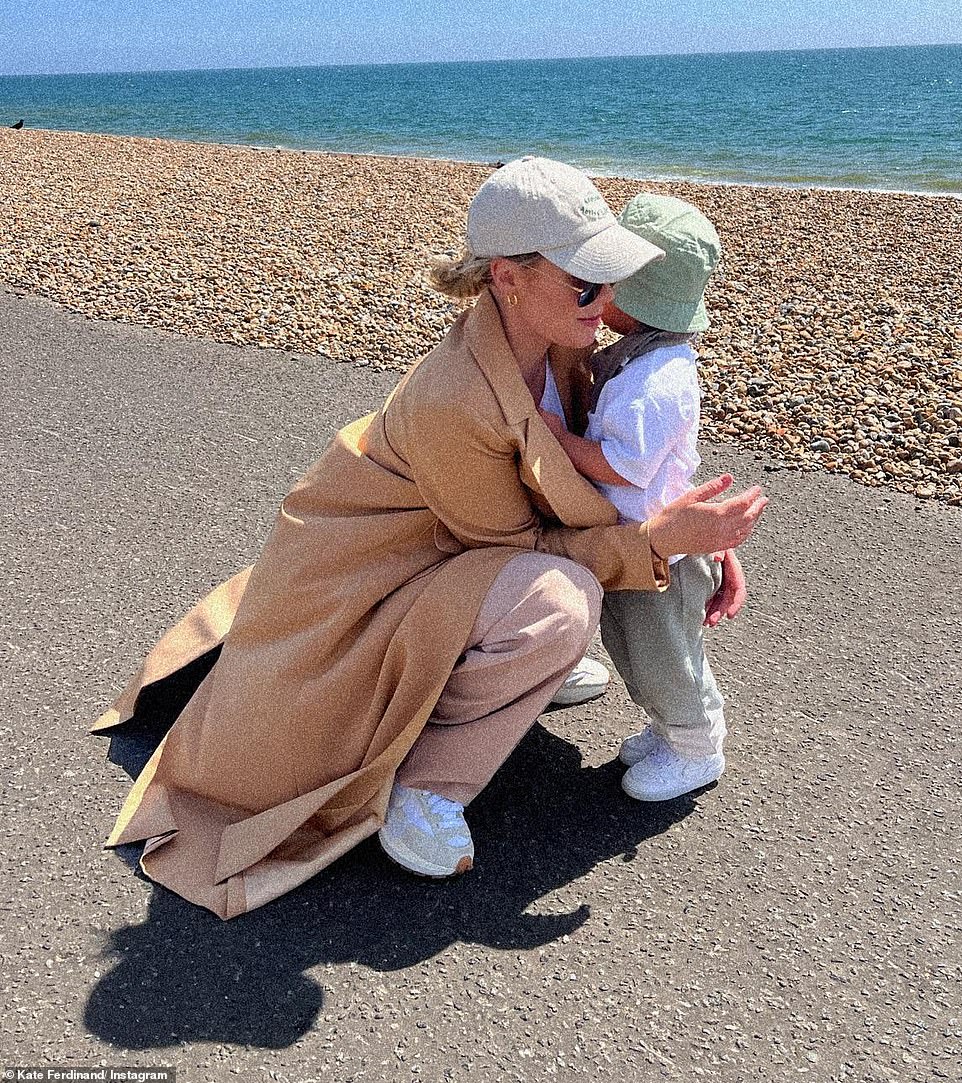 Doting mother: Kate frequently shares images of herself and son Cree with Instagram followers (pictured in May 2022) 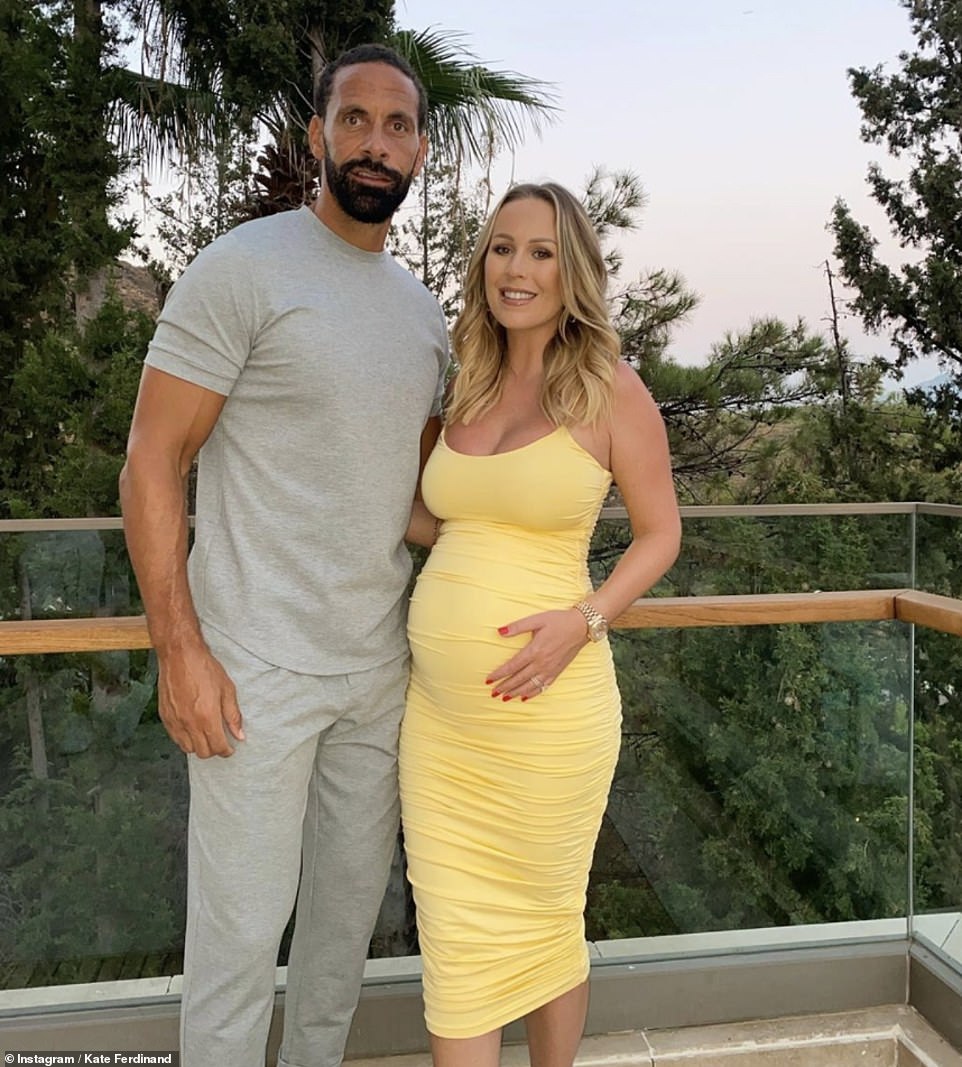 Inseparable: Kate began dating footballer Rio in 2017 and they married during an extravagant wedding ceremony in Turkey in 2019

The reality star recently admitted she worries about her stepchildren, adding that the love for a stepchild is ‘even sometimes more intense.’

According to The Sun, the podcast host detailed the ‘instant love’ with your biological offspring before adding: ‘I feel the love of a stepchild is even sometimes more intense, because you’ve worked so hard to get there and I find myself probably overdoing everything.

‘I worry about the big kids so much more. There’s a different kind of worry that comes with children that have lost a parent.’ 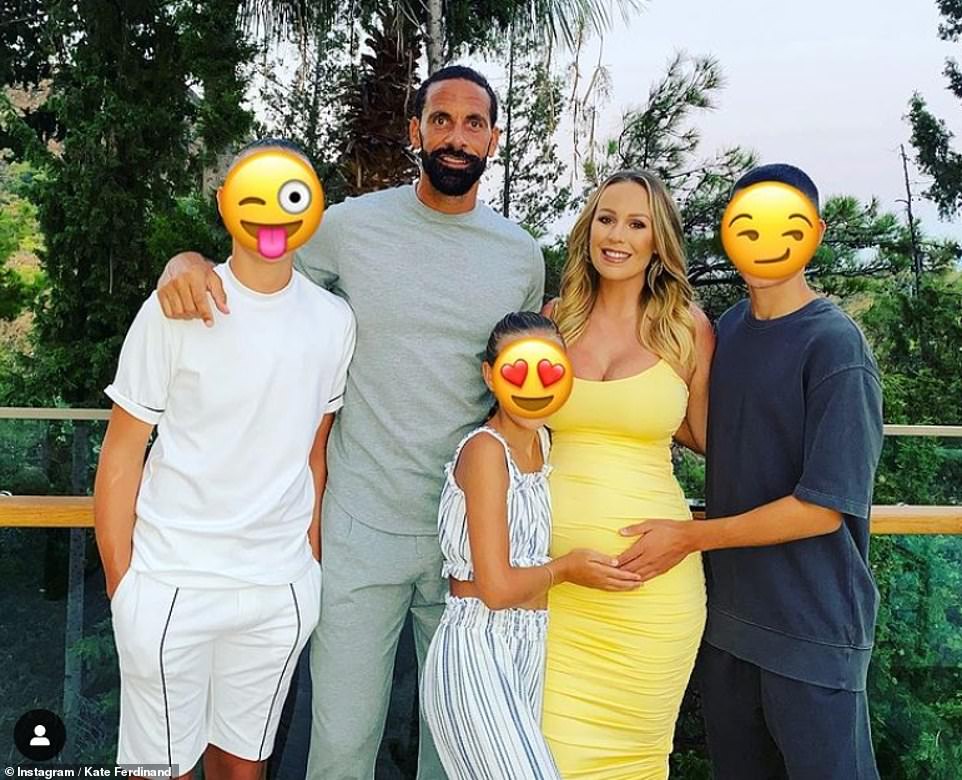 Open: Kate is also a stepmother to Lorenz, 15, Tate, 13 and 11-year-old Tia, Rio’s three children from his first marriage to Rebecca Ellison, who passed away aged 34 in 2015 after battling breast cancer 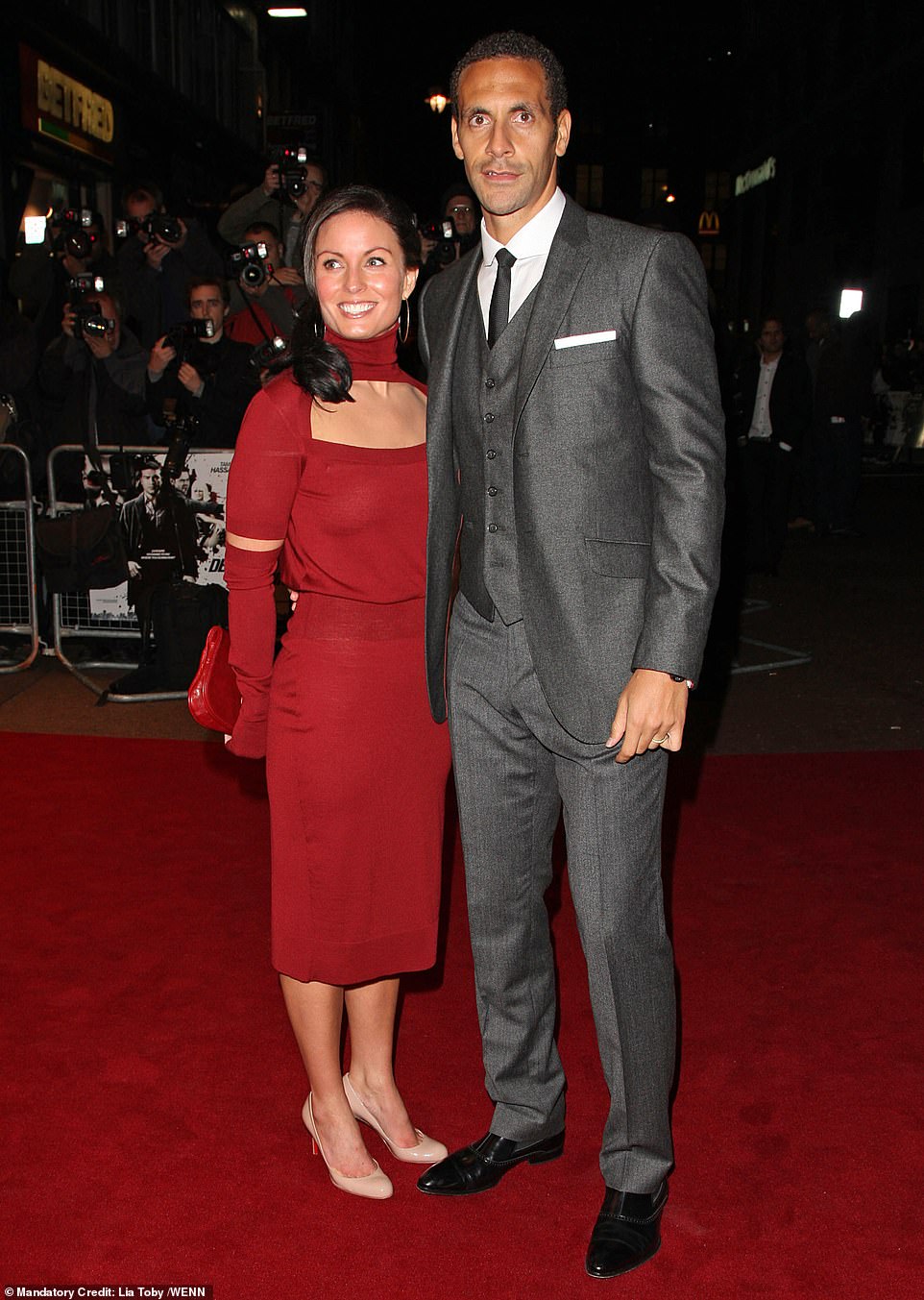 Tragic: The reality star started dating Rio in early 2017, two years after he tragically lost his wife Rebecca  (pictured in 2009)

She discussed raising her blended family on the Parenting Hell podcast, while detailing the changing dynamic with Rio and Rebecca’s three children.

Kate insisted that she never wanted to take the place of their mother, and that learning about Rebecca has made her a better parent.

She said: ‘Their mum is a massive part of our lives and always will be. I would never want the children to think I am taking the role of [Rebecca].

‘I am a maternal figure to them but their mum is their mum. She is part of our lives. We talk about her all the time.

‘It is really weird but I feel like I know her.’ 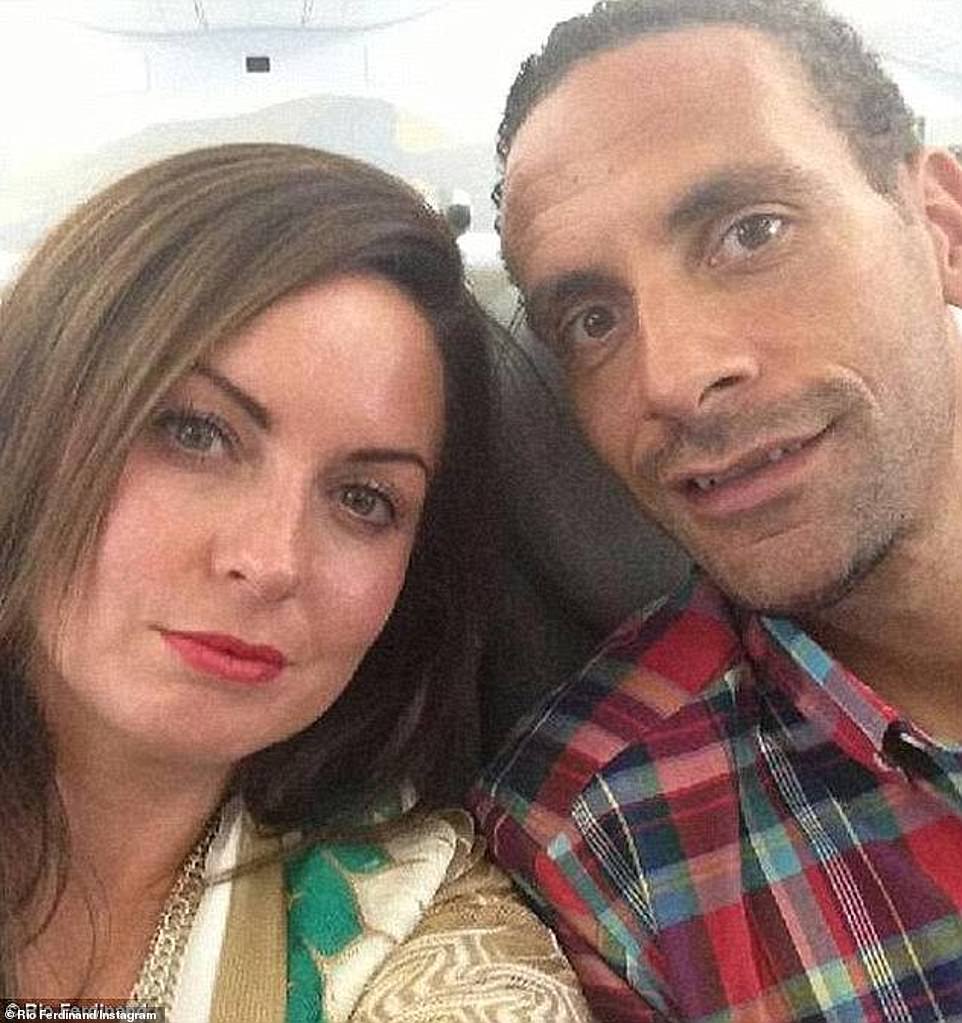 Old times: Rachel and Rio pose together in an undated social media photo shared with the former footballer’s followers