Lioness Ella Toone has been snapped stepping out for lunch with friends in Cheshire, less than two weeks after the England team’s stunning victory in the Euro 2022 final.

Ella, 21, from Manchester, looked cool and casual in an oversized white T-shirt and black cycling shorts as she walked down the street in Wilmslow.

The athlete, who plays for Women’s Super League club Manchester United as well as the England squad, finished off her sports luxe look with fresh white trainers, a black rectangular cross-body bag, and sunglasses.

Her outing comes less than a fortnight after she represented her country at the finals of Euro 2022. 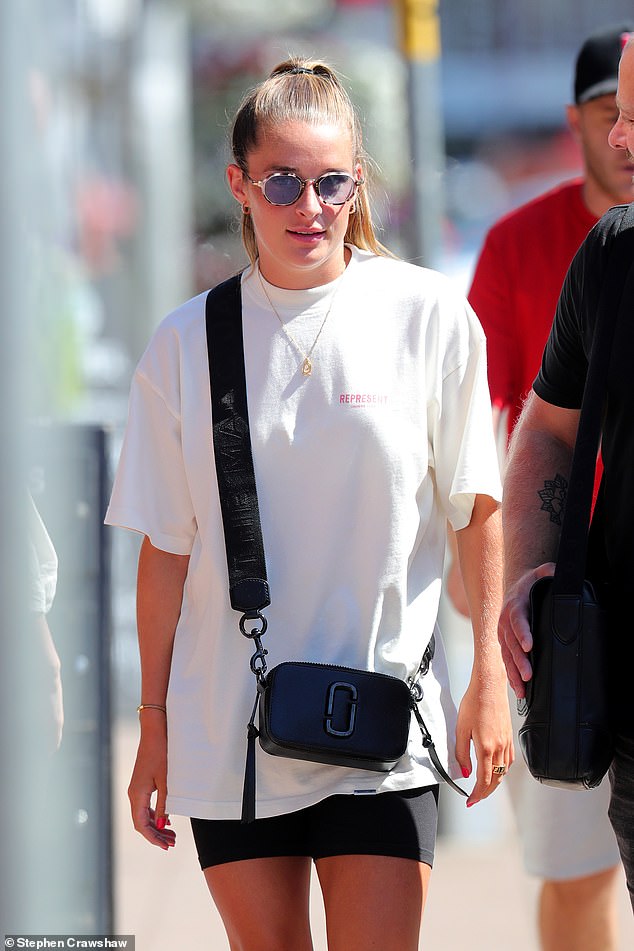 Lioness Ella Toone was snapped stepping out for lunch with friends in Cheshire, less than two weeks after the England team’s stunning victory in the Euro 2022 final

At one point, the star – who scored during England’s 2-1 victory over Germany in the Euro 2022 final – was seen pulling out her phone, appearing to make a quick call

The Lionesses beat eight-time European champions Germany 2-1 in extra time during the thrilling meeting in Wembley Stadium, ahead of a record crowd of 87,192.

And Ella scored one of England’s two goals, striking just six minutes after coming on in the second half, earning praise from men’s team captain Harry Kane for her audacious chip.

A brilliant ball from Keira Walsh set the substitute in on goal and she produced a composed finish to lift the ball over on-rushing Germany keeper Merle Frohms.

Discussing the winning shot after the match, Ella said: ‘I started celebrating even before it had gone in the net, so I was confident that it was going in and then the whole stadium erupted, honestly [the] best feeling of my life.

‘You can see that the subs have made a massive impact in every game that we’ve come on for.’

The England player, who also plays for Women’s Super League club Manchester United, finished off her stylish look with a pair of tortoiseshell shades and black crossbody bag 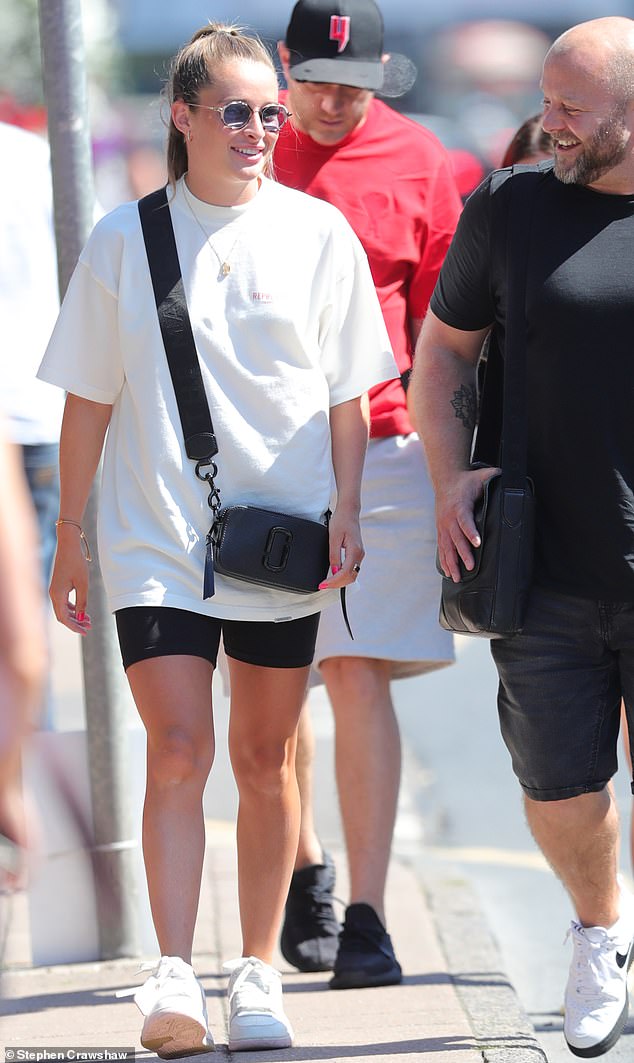 Despite being just 21, Ella is used to representing the country on an international stage, and has played for the national side at under-17, under-19 and under-21 level

In recent days since playing crucial role in the historic victory, the 21-year-old has been snapped enjoying a well-deserved break in Ibiza with her boyfriend.

She was spotted enjoying drinks and holding hands with her partner on the beach.

The pair were then seen enjoying each other’s company in the water as she continued her holiday, having earlier enjoyed a relaxing day onboard a yacht in the Mediterranean.

At 21, Ella Toone is one of the youngest members of the England team, however, she is used to representing the country on an international stage.

Indeed, the player has played for the national side at under-17, under-19 and under-21 level. 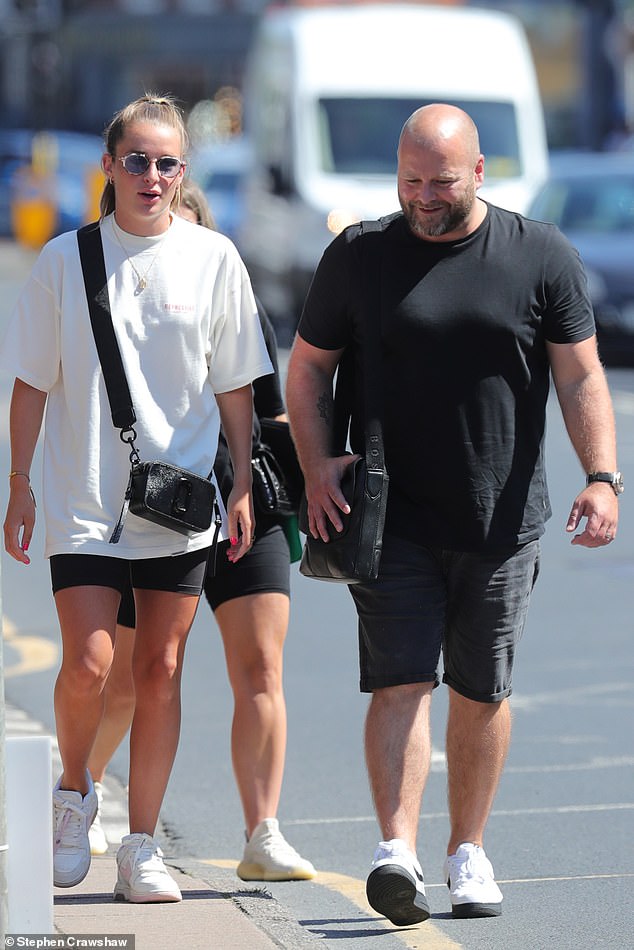 The football star appeared to be deep in conversation with a friebd during her outing in Wilmslow, Cheshire 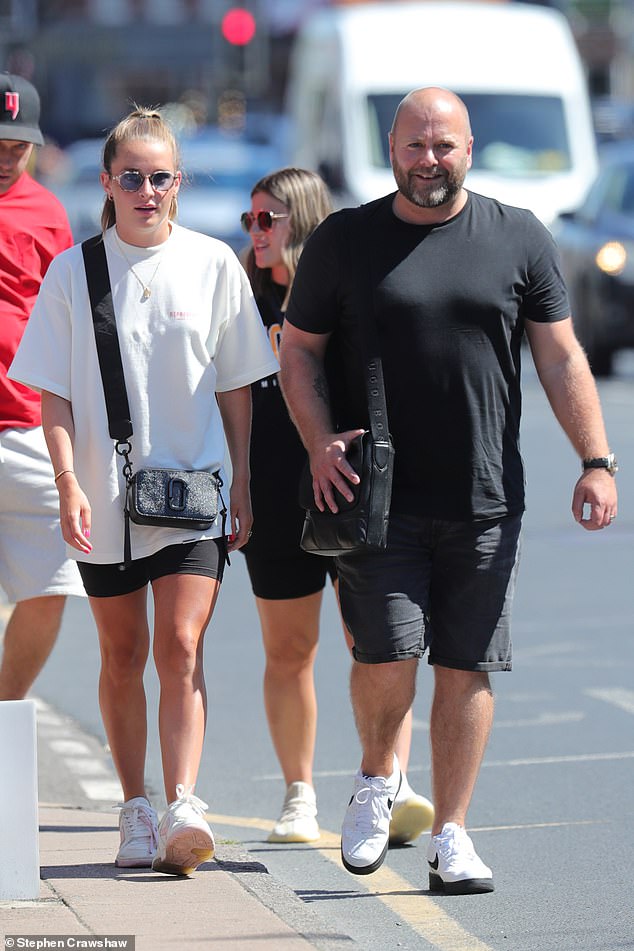 Following a busy Summer playing in the Euros, the athlete has been snapped enjoying a well-deserved break in Ibiza, before being spotted enjoyed lunch with friends today

When it comes to club level, she played for her side – Manchester United – as a girl, before returning four years ago following stints at Manchester City and Blackburn Rovers.

Despite her busy schedule, she still finds time to watch Manchester United at home and away.

Ella has previously said: ‘ I just love going and supporting; it’s been a part of me since I was a little girl. We get tickets for home games for if we’re not training.

‘I’ve got a little source at the club who sorts me out away tickets but I’m not telling any of the girls that because it’s just me.’