Contents hide
I. London Fire Brigade calls for URGENT ban on disposable BBQs in parks and public spaces as 40C heatwave sparks wildfires across the capital and Britain
I.I. NINE major fires being tackled by the LFB
I.II. Share or comment on this article:
I.III. Give This Article A Share:

The London Fire Brigade today demanded an urgent ban on disposable barbecues in parks and public spaces as a 40C heatwave sparked wildfires across the capital and the country.

The authority said it had attended more than 1,000 grass fires since June, as it declared a major incident this afternoon in response to a surge in callouts.

Today a huge blaze destroyed two houses in the village of Wennington, east London, today, with 15 fire engines and 100 firefighters called out.

Major fires also broke out nearby in Upminster and across the Thames at Dartford in Kent, on a day when millions of people were working from home. There was also a major gorse blaze today at Zennor near St Ives in Cornwall.

The LFB said it had attended more than 1,000 grass fires since June, as it declared a major incident this afternoon in response to a surge in callouts

A huge grass blaze broke out in Wennington, Essex, this afternoon and appeared to have destroyed this house (centre)

NINE major fires being tackled by the LFB

Firefighters in London said they were battling ‘several significant fires’ including these nine:

Today the LBF tweeted: ‘We’ve called for an urgent ban of disposable barbecues in parks & public spaces as firefighters continue to feel the effects of unprecedented heatwave temperatures for a second day.’

Sadiq Khan said the brigade is under ‘immense pressure’ thanks to a number of fires across the city.

The London Mayor said on Twitter: ‘London Fire Brigade has just declared a Major Incident in response to a huge surge in fires across the capital today.

‘This is critical: @LondonFire is under immense pressure.

‘Please be safe. I’m in touch with the Commissioner and will share updates when I have them.’

It came as temperatures in the city hit around 40C amid the heatwave blasting the nation.

LFB said 15 fire engines and around 100 firefighters were called to the scene in Wennington at just after 1pm.

At least one home appeared to be completely destroyed in the blaze, while smoke covered a wide area.

Nearby fields were seen to be scorched.

Another blaze at Lickey Hills Country Park near Birmingham, spread to 50,000 square metres and forced 15 people to flee their homes, while firefighters in Essex said they were receiving three times their average number of calls.

West Midlands Fire Service received 717 incident calls yesterday – a rise of 280 in the space of a week, while crews in Hereford and Worcester had 54 fires based around fields, undergrowth and woodland. 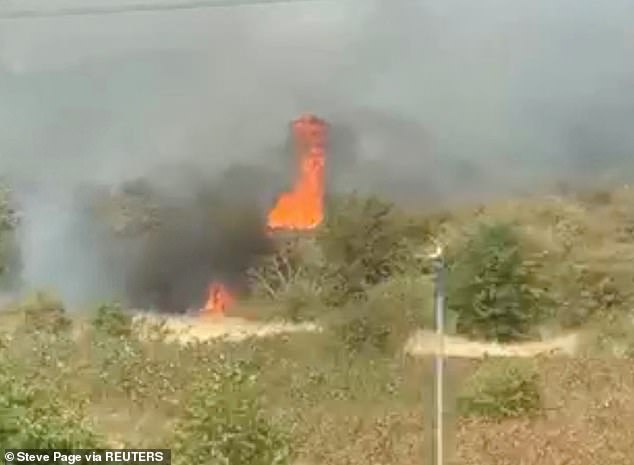 Major fires also broke out nearby in Upminster and across the Thames at Dartford in Kent, on a day when millions of people were working from home

In Nottinghamshire, fire crews saw a ‘significant increase’ in grass fires over the last month, with numbers up even more this week.

The National Trust have also backed calls for people to avoid lighting barbecues or campfires, and not to leave glass bottles on the ground.

‘We’re on tenterhooks that someone is careless with a cigarette butt or thoughtless by lighting barbecues, and us having to deal with a wildfire,’ the Trust’s conservation head Ben McCarthy said. 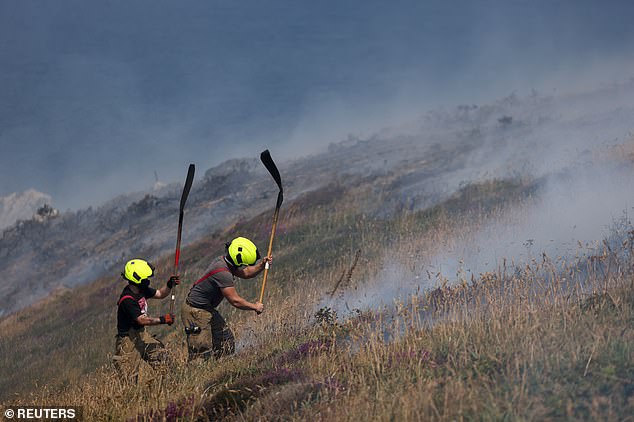