The devastated mother of a British aid worker who has died in captivity in Ukraine has lashed out at his ‘murderers’, saying Russian-backed separatists ‘let him die’.

Paul Urey, 45, who was captured in the Zaporizhzhia region of Ukraine on April 25, died on July 10 in the self-proclaimed People’s Republic of Donestk after being taken to a prison camp in Ukraine’s east, an official there said today.

Linda Urey, his mother, said she was ‘absolutely devastated’ to learn of her son’s death – accusing rebel leaders of being ‘f***ing murderers’ and saying: ‘I hate you all.’

In a Facebook message dripping with venom, she wrote: ‘I told you he was a very sick man, I told he he was diabetic. I begged to give me my son back.

‘Why did you let him die? I want answers. Why didn’t you release him?

‘I hate you all. I’m absolutely fuming, I really am, I’m angry. Very very very very angry. Murderers, that’s what you are. F***ing murderers. I hate you.’ 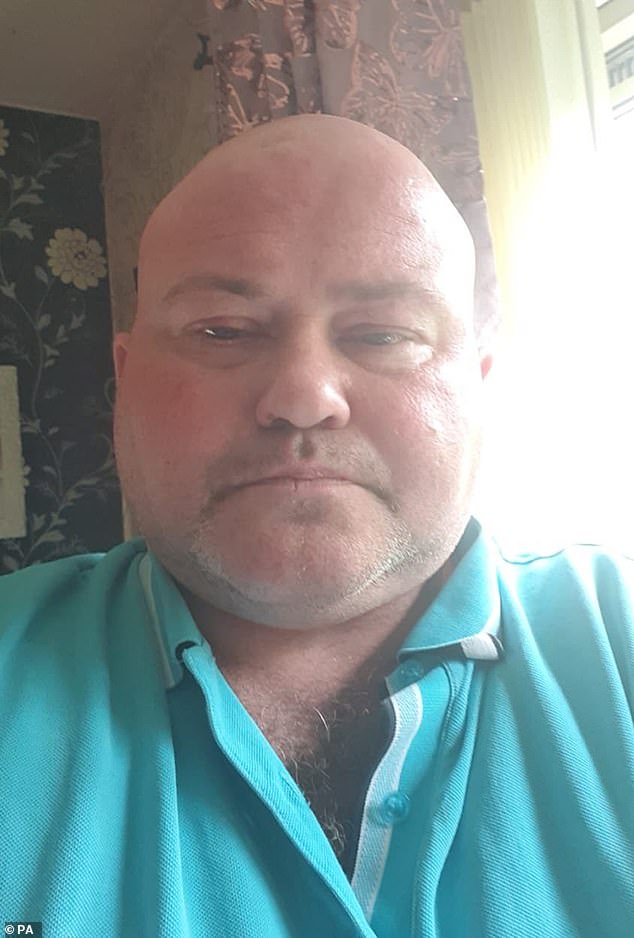 British aid worker Paul Urey who was captured by pro-Russian separatists in Ukraine has died in detention, Kremlin media has claimed 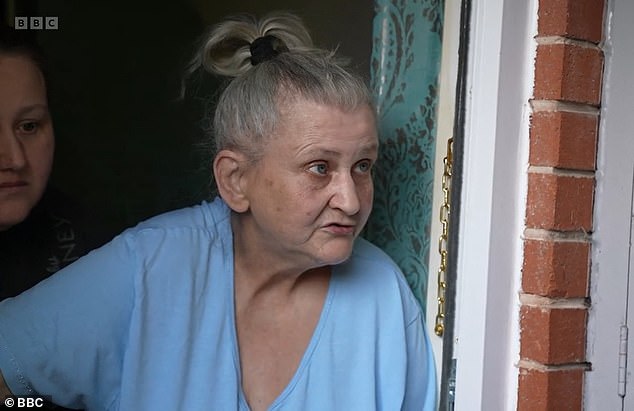 Linda Urey (pictured speaking at the time of her son’s capture) has hit out today, accusing Russian-backed separatists of ‘letting him die’ and branding them ‘murderers’

She said Urey suffered from ‘insulin-dependent diabetes, damage to the respiratory system, kidneys and a number of diseases of the cardiovascular system’.

Morozova claimed he had been given proper healthcare in jail, but ultimately succumbed to his conditions and ‘depression’ over his fate.

In fact, prisoners in the DPR say they have been kept in modern-day concentration camps where beatings, torture, malnutrition and disease are common.

Jenny Urey, another relative, also paid tribute online – calling Mr Urey ‘a hero’ before adding: ‘Paul is out of harm and safe now.’

Mr Urey, a father-of-two originally from Warrington, had gone to Ukraine without telling his family earlier this year to provide aid to locals caught up in the war.

He travelled independent of any organisation and was not working for a charity while there, but had been in contact with NGO Presidium Network.

Dominik Bryne of the Presidium Network helped raised the alarm about Mr Urey’s capture on April 25, saying he had stopped responding and that a woman he had been trying to help was also getting ‘strange messages’.

Dylan Healy, a fellow Briton who had also been in contact with the charity, is thought to have been captured with him as the pair tried to cross a Russian checkpoint.

Ten days after his capture, Mr Urey appeared on Russian state TV to denounce the UK government as ‘corrupt’ and blast British media for misrepresenting the war.

He also claimed to have fought in conflicts including Afghanistan, Iraq and Libya, but relatives say these statements were almost certainly made under duress.

After that interview, it was revealed the DPR was charging Urey with being a foreign ‘mercenary’ and planned to put him on trial in their kangaroo court.

Russian separatists frequently accuse foreigners they capture of being ‘mercenaries’, because it means they are not protected under international law and can be prosecuted for crimes committed in war.

If convicted, Mr Urey would have been sentenced to death by firing squad. 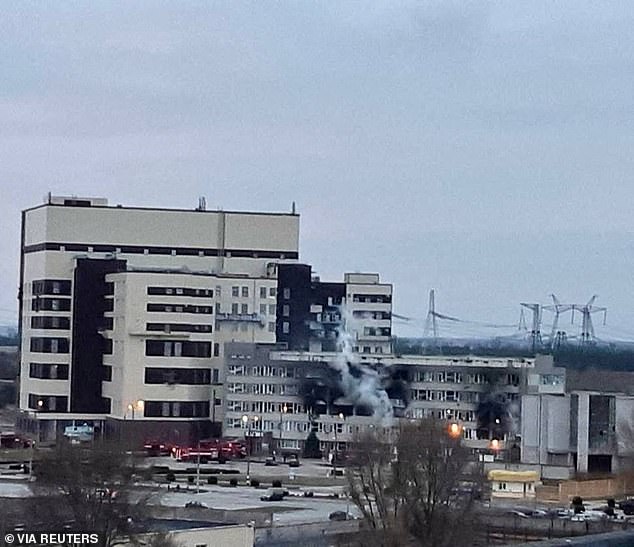 Mr Urey was captured in the Zaporizhzhia region on April 25 while trying to cross a Russian checkpoint (pictured, the city’s nuclear power plant after being attacked by Russia) 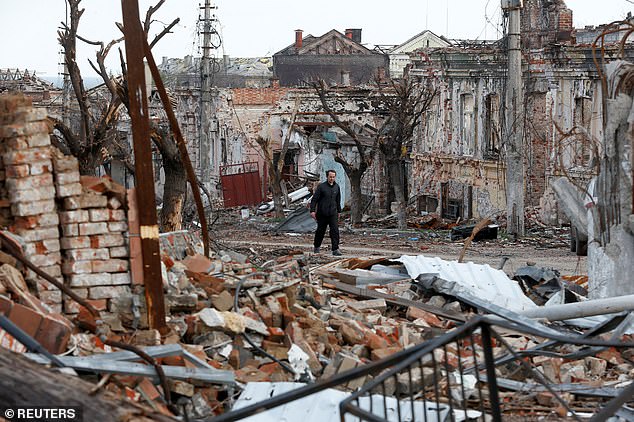 After his capture, Mr Urey was taken to the Donetsk region where he was held in a detention camp (pictured, the destroyed city of Mariupol in the same region) 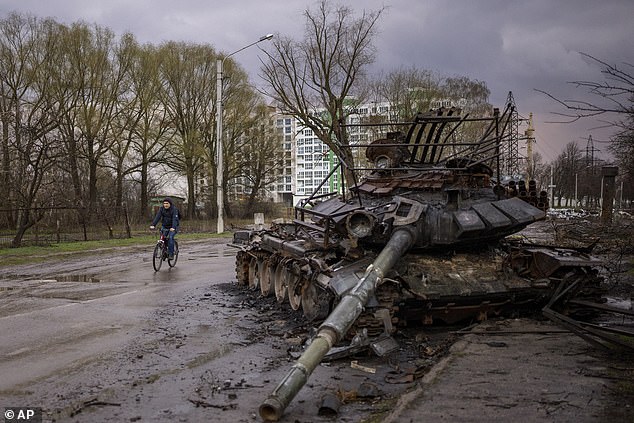 At the time Mr Urey was captured, Russia had been pushed back from Kyiv (pictured) and was preparing an assault in the Donbas while steadily taking territory in the south

Daughters Courtney and Chelsea Coman, 17 and 20, told Sky News after his Russian media appearance that they were ‘preparing for the worst’ and feared their father ‘wouldn’t be coming home any time soon’.

The pair said they had no idea Mr Urey had gone to Ukraine, and suspect he didn’t tell them because they would have tried to stop him.

‘We’re just about coping for now. We really don’t know anything, like if he’ll be okay there, if he’s coming home or going back to Ukraine as a prisoner swap,’ Courtney said at the time.

‘We just don’t know, so we’re preparing for the worst,’ she added, before her sister chimed in: ‘But hoping for the best.’

Chelsea said: ‘It might seem selfish for other people but I do feel a bit like ‘why have you gone and done this?’

Linda also spoke out shortly after Mr Urey’s capture – revealing he had gone to Ukraine shortly after the war broke out, had come home briefly in early April, then gone back to continue his aid work.

She said she ‘begged’ him not to return and to instead live out a ‘boring life’ in the safety of the UK, but he refused to listen.

‘I was on FaceTime with him up to 4am on Monday morning and that was it – gone,’ she said – describing him as ‘too caring’.

Asked how she was feeling, she replied: ‘Like I want to die, like I don’t know what to do any more. I don’t know. It’s horrible.’

MailOnline has contacted the Foreign Office for comment on Mr Urey’s case.

A Downing Street spokesman said: ‘They’re clearly alarming reports and our thoughts are obviously with his family and friends.’

A Foreign Office spokesperson added: ‘We are urgently seeking clarification from the Russian government on media reports that a British aid worker has died in Ukraine.’ 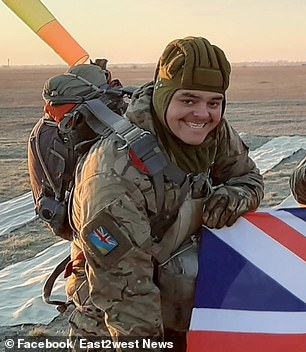 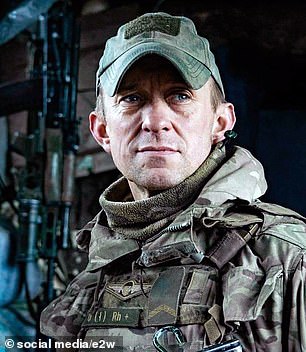 Aiden Aslin (left) and Sean Pinner (right) are two fellow Britons being held in Donetsk, where they have been sentenced to death for being ‘mercenaries’ despite being regular soldiers

Also Read  Injustice for Durban family who refused to leave home, mistaken for Zondo’s, during unrest

His death comes amid fears for the safety of two more Britons held in the DPR who have been sentenced to death for being ‘mercenaries’ – Sean Pinner and Aiden Aslin.

The pair were captured fighting for Ukraine against Russia in the besieged city of Mariupol in April, before being handed the death penalty back in May.

They are appealing the sentence, but Denis Pushilin – self-proclaimed leader of the DPR – has already said he sees no reason to issue a pardon and earlier this week said an ‘execution site’ is being prepared for them.

If the sentence is carried out, then the two men will die by firing squad.

Though both Mr Aslin and Mr Pinner were fighting Russia, they were doing so as part of Ukraine’s regular army – having moved to the country back in 2016, married Ukrainian women, and signed up the to military shortly afterwards.

As such, they should be considered prisoners of war under international law which protects them from prosecution for fighting.

Mr Urey’s death will also raise fears for the safety of a number of other Britons being held in eastern Ukraine, including Mr Healy and Andrew Hill – a father-of-four British Army veteran from Plymouth also captured in April in Mykolaiv.

Mr Hill is thought to have been fighting for Ukraine’s foreign legion, having gone to the country as an aid worker before being persuaded to sign up.

He has appeared on Russian state media a number of times – including in April when he was filmed with a bandaged left arm, a makeshift bandage around his head, and blood on his right arm.