Contents hide
I. TUI plane fire at Manchester airport is over after crew extinguish the blaze in front of stunned holidaymakers
I.I. Share or comment on this article:
I.II. Give This Article A Share:

By Walter Finch and Tom Brown For Mailonline

Holidaymakers at Manchester Airport were shocked to see fire engines rush over to a returning jet with a smoking jet engine.

A Tui flight landed about 4.30pm Saturday to be immediately swamped by a fleet of fire engines.

The engines immediate began spraying the right engine with water, producing billowing plumes of smoke as travellers in nearby departure lounges watched on.

‘Suddenly just a load of fire engines appeared and started spraying it down with water while we were having a drink at the bar,’ one eyewitness told MailOnline.

‘All this smoke started coming out. It looked like one of the engines had overheated.’ 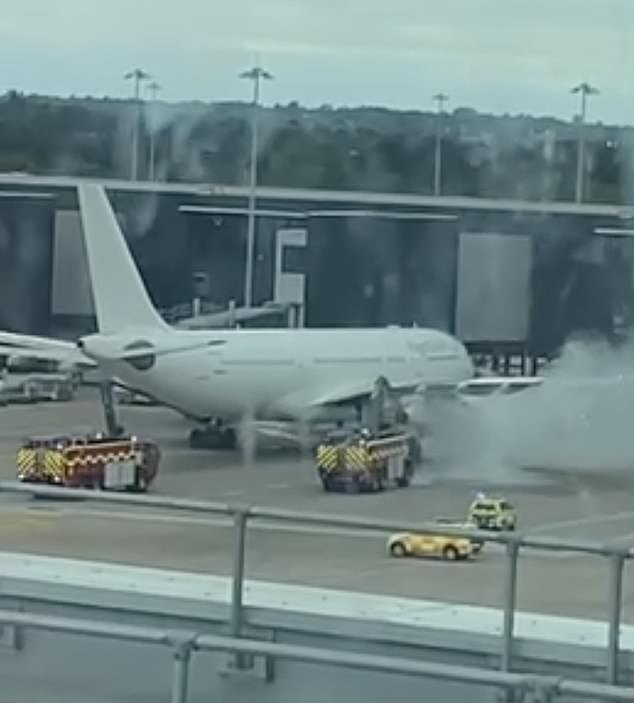 A Tui plane landed around 4.30pm today at Manchester Airport with a reported overheated engine

‘Sat on the ground waiting for [takeoff] and saw a few fire engines and other emergency vehicles going past,’ said Twitter user Hannah Evenden. ‘They’ve said on our flight that there was an incident with an arriving [flight].’

‘Engine fire on stand, it’s out but I imagine there’s no runway cover from the fire service as they are all at the aircraft,’ added Dutch Holland, another user.

Meanwhile, rail services will be severely disrupted this weekend as a train strike by train drivers times to coincide with the Commonwealth Games and the kick off of the new football season brings trains to a halt across the country, and repair workers set to walk out for three days from tomorrow.

A spokesperson for TUI said: ‘We can confirm flight TOM2609 Mahon to Manchester airport experienced a technical fault on arrival to the stand and was met by the fire service.

‘The safety of our passengers and crew was not compromised and always remains our highest priority. The aircraft was completely safe to land, and all passengers have been disembarked.

‘Any customers who may experience a delay due to this will be contacted to advise them of any changes.

‘We understand how unsettling it can be when an aircraft is met by emergency services so we will continue to offer our full support.

‘We’d like to apologise to all customers for the inconvenience and thank them for their patience and understanding at this time.’

In the latest outbreak of industrial unrest in the industry, members of the drivers union Aslef at seven train operators have walked out for 24 hours over pay today.

The travel disruption comes as it is estimated that 70 per cent of families have planned or are planning a break following two years of largely going nowhere due to the pandemic.

These plans run the risk of being scuppered by scenes such as those witnessed at the weekend at the Port of Dover and at the approach to the Eurotunnel station at Folkestone.

Savvy holidaymakers could be forgiven for thinking reaching the Continent by ferry or train would be a more sensible option than braving an airport.

At airports, queues in some cases continue to stretch out of the terminals and, on your return to the UK, you may or may not be reacquainted with your luggage.

Also Read  Best Amazon Prime Day 2022 deals on Day Two: The biggest offers on everything from tech to fashion