Boris Johnson’s penultimate PMQs was delayed amid chaotic scenes as two Scottish nationalist MPs were kicked out of the House of Commons chamber.

In a furious row this afternoon, Speaker Sir Lindsay Hoyle ordered the removal of Alba Party MPs Neale Hanvey and Kenny MacAskill for disrupting the start of the session.

Mr MacAskill, the East Lothian MP, could be heard trying to raise a point of order and appeared to say ‘we need a referendum in the Prime Minister’ before he was drowned out by other MPs.

He refused to sit down and continued to speak as Mr Johnson attempted to address the Commons for the first time since he announced his resignation.

Mr Hanvey, the Kirkcaldy and Cowdenbeath MP, had also risen to his feet and could not be heard over the angry heckling from Tory benches.

A further session of PMQs is scheduled for next week, which would be the last before Mr Johnson is replaced by a new Tory leader and leaves Number 10 following the revolt against him by his own party.

But, after the rowdy Alba Party MPs had been removed, the PM appeared to suggest today’s session was his final PMQs.

He told MPs he would be leaving office ‘with my head held high’ and also took the opportunity to aim a fresh swipe at Labour leader Sir Keir Starmer. 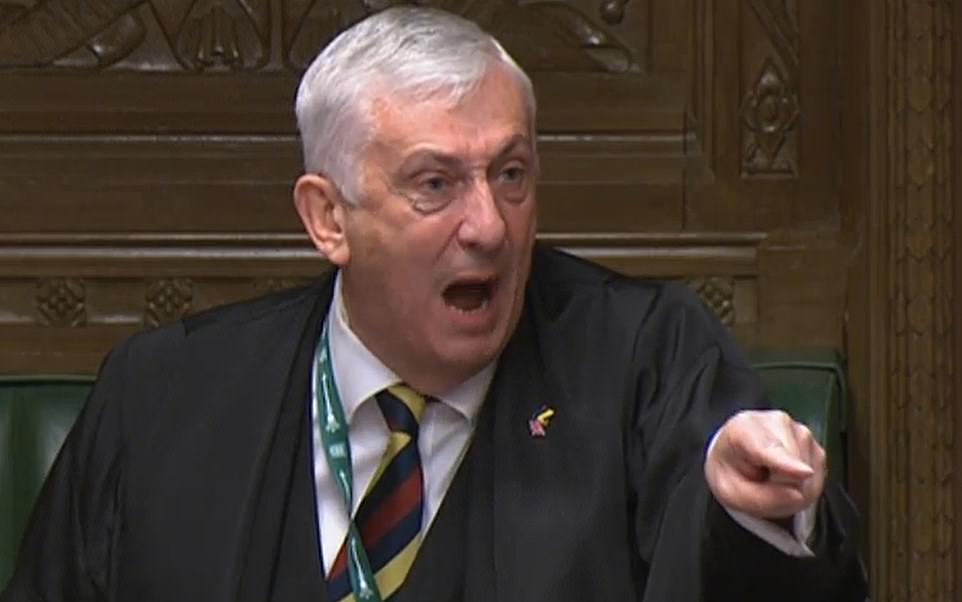 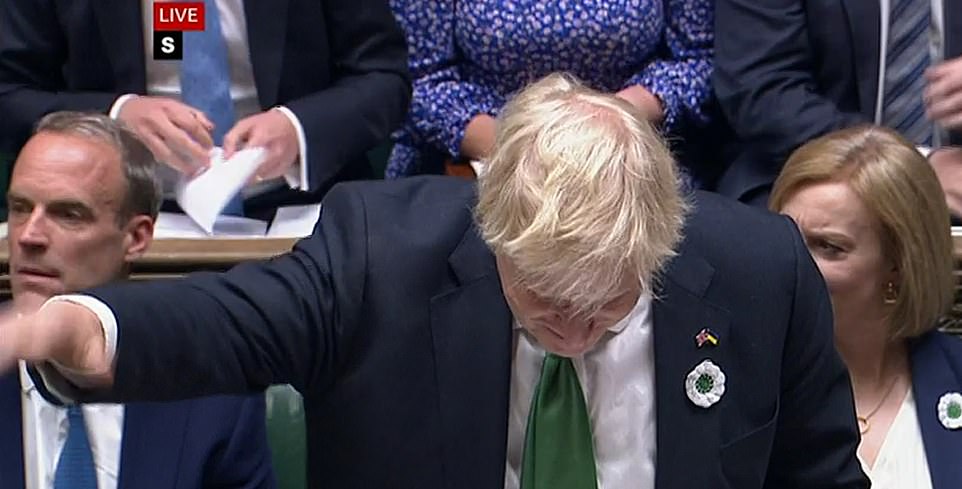 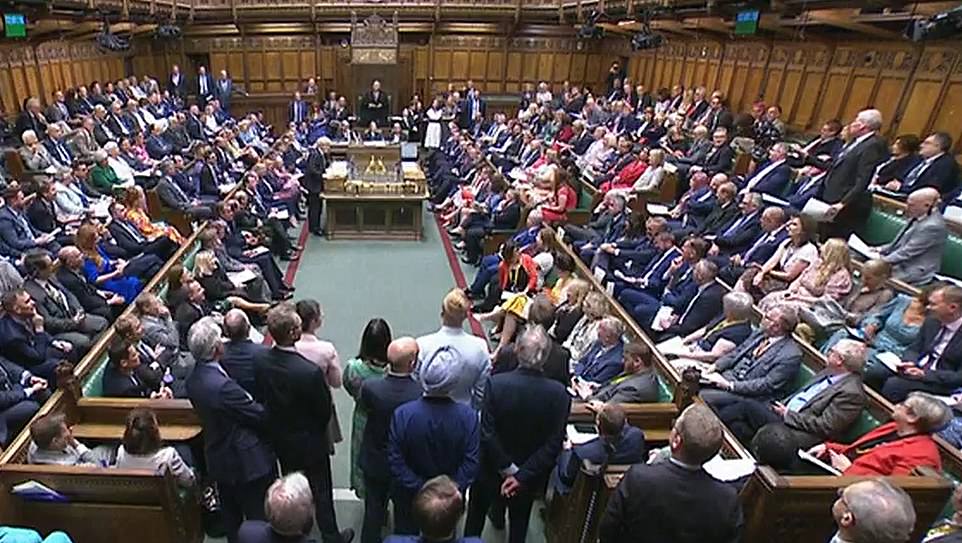 Mr Johnson suggested the Tory leadership race may not go the distance and his term in No 10 may end before the contest to replace him is scheduled to end on 5th September.

He told Sir Keir: ‘The next leader of my party may be elected by acclamation, so it is possible this will be our last confrontation, it is possible.

‘So, I want to thank him for the style in which he conducted himself. I think it would be fair to say he has been considerably less lethal than many other members of this House.’

The PM had also claimed that any of the eight ‘brilliant’ remaining candidates in the contest to replace him as Tory leader would ‘wipe the floor’ with Sir Keir, who he branded ‘Captain Crasheroony Snoozefest’.

The Labour leader, in a dig at Mr Johnson, had called for MPs to ‘cut him some slack’ as the PM was ‘faced with an uncertain future’ and ‘a mortgage-sized decorators’ bill that will be soon for somebody else’s flat’.

Before his exchanges with Sir Keir, Mr Johnson was seen gesturing to Mr MacAskill to sit down as he tried to answer the first question at PMQs.

‘Order! Order!,’ he shouted. ‘I will not tolerate such behaviour, if you want to go out, go out now.

‘But if you stand again I will order you out. Make your mind up; either shut up or get out.’

Sir Lindsay was also forced to tell the Tory benches to ‘shut up’ as temperatures soared in the Commons.

The Speaker then formally requested the suspension of Mr MacAskill and Mr Hanvey by following the Commons convention of naming them.

He said: ‘Neale Hanvey, I’m now naming you and Kenny MacAskill to leave this chamber. Serjeant, deal with them.

‘Out now, Serjeant-at-arms escort them out.’ 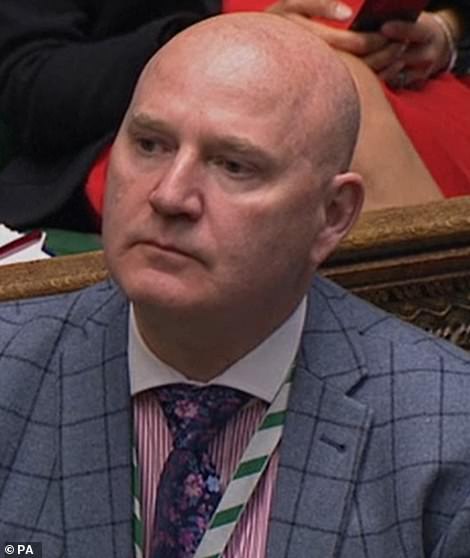 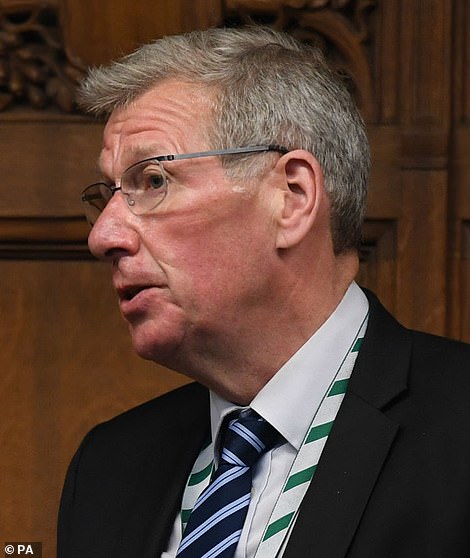 Mr Hanvey (left) and Mr MacAskill, the Alba Party MPs, were both kicked out of the Commons at the beginning of PMQs amid furious scenes 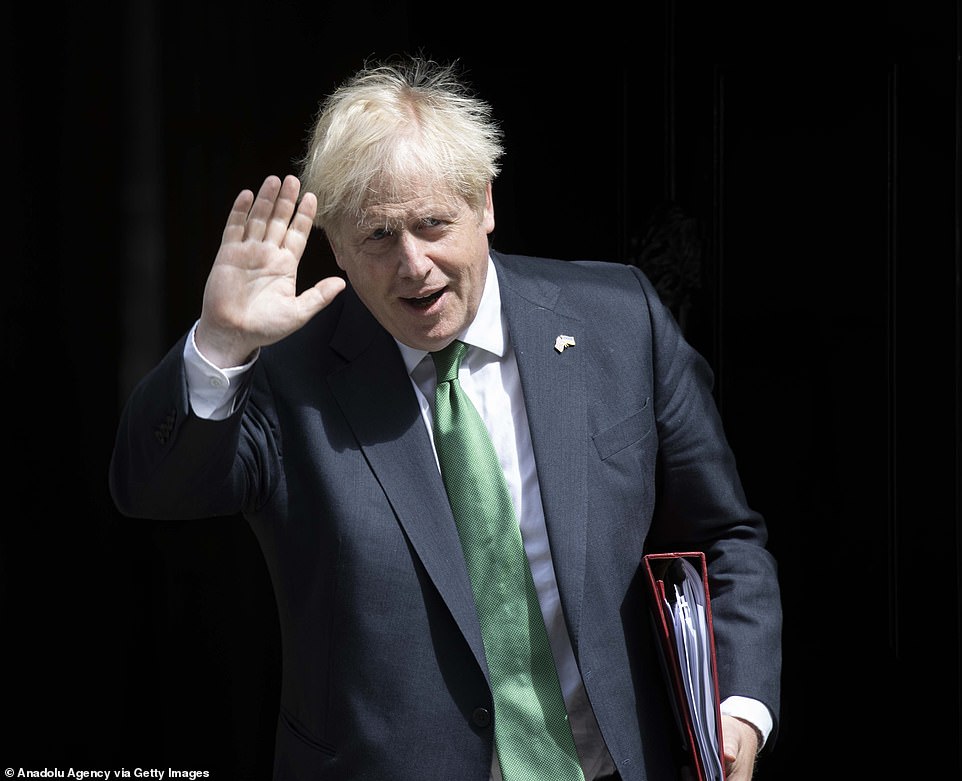 Mr Johnson appeared to suggest today’s was his last PMQs before he is replaced as Tory leader, despite a further session having been scheduled for next week 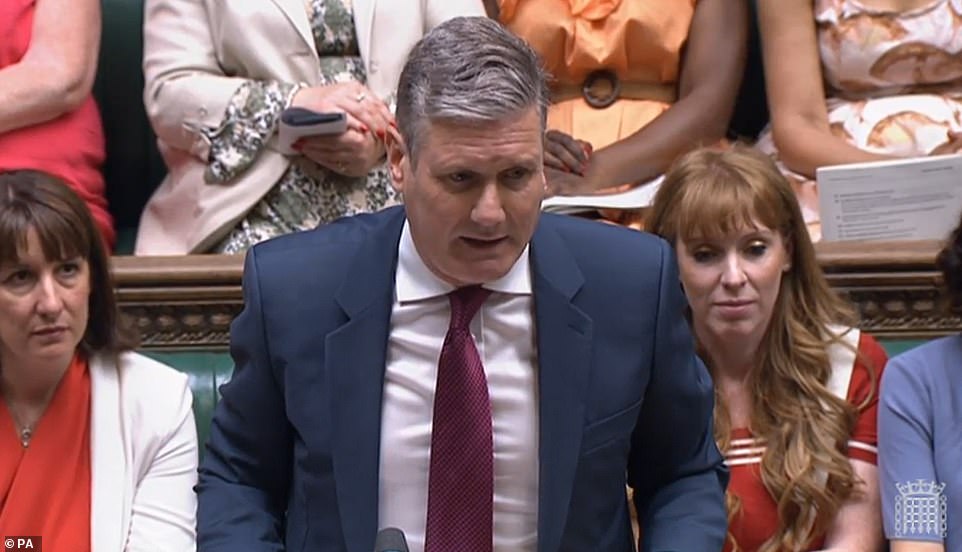 After a revolt by Tory MPs led to his downfall last week, Mr Johnson joked that Labour’s Sir Keir Starmer had been ‘considerably less lethal than many other members of this House’ 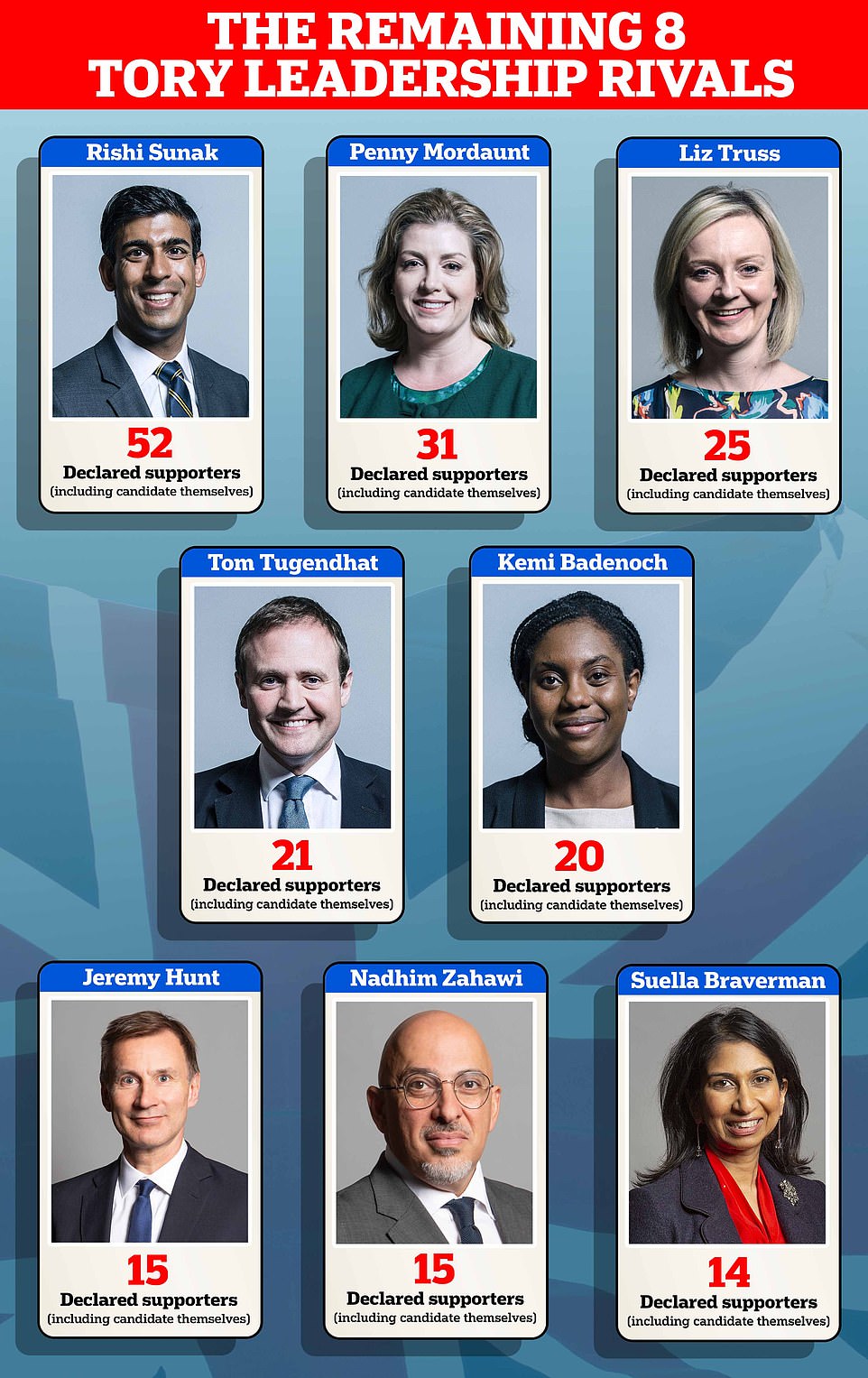 Towards the end of PMQs, Mr Johnson urged an SNP MP to ‘change the record’ after ‘three years of listening to this delirium of monotony from the Scottish nationalists’.

Alan Brown, the Kilmarnock and Loudon MP, asked the PM why he thought it was right to try and block ‘a democratic vote for Scotland’ to choose its future away from a ‘corrupt’ Westminster.

Mr Johnson replied: ‘Can I just say to the honourable gentleman that after three years of listening to this delirium of monotony from the Scottish nationalists, I really think they need to change the record.

‘What the people of this country want is a focus on the cost of living, a focus on the economy and making sure on schools, on standards and schools, those are things that he should fix. To say nothing of the tragedy of drug deaths in Scotland, which they still haven’t done anything to address.’

‘Everything I have seen has taught me that we are far, far better, whether it’s on Ukraine, or Covid, or on furlough, there’s absolutely no doubt that we are better off working together.’

At the end of PMQs, MPs approved the suspension of Mr MacAskill and Mr Hanvey.

The pair are both former SNP MPs who defected to the Alba Party when it was founded by former Scottish first minister Alex Salmond last year.

Mr MacAskill and Mr Hanvey had written to Mr Johnson earlier today to demand he grant the Scottish Government the power to hold a second independence referendum during the PM’s final weeks in Number 10.

Speaking after they were ejected, Mr Hanvey said: ‘Scotland’s mandate for an independence referendum must be respected.

‘Scottish MPs are in Westminster to settle up for the people of Scotland, not to settle down.

‘Why should we respect the rules of the House of Commons when Westminster will not respect Scottish democracy?

‘People back home are sick and tired of the House of Commons dismissing the democratic right of Scotland to determine its own future.

‘Scotland will not be held hostage by any UK Prime Minister, especially one on the fag end of his premiership.’

Mr MacAskill said: ‘Scotland has a mandate for a referendum and this prime minister is denying Scottish democracy.

‘Meanwhile, Scotland is energy rich but half of our people are facing fuel poverty, it is perverse.

‘No Tory Prime Minister has been elected by the people of Scotland in my lifetime and that will be the same for the next.

‘Scotland’s voice will be heard and the people of Scotland will prevail. It’s time for independence.’