Demelza weds her hunk… but this time in real life: Poldark star Eleanor Tomlinson, 30, stuns in strapless white dress as she marries rugby player Will Owen, 27, at Cotswolds estate

Contents hide
I. Demelza weds her hunk… but this time in real life: Poldark star Eleanor Tomlinson, 30, stuns in strapless white dress as she marries rugby player Will Owen, 27, at Cotswolds estate
I.I. Share or comment on this article:
I.II. Give This Article A Share:

As Demelza in Poldark, she married the hunky Ross.

So it was a case of life imitating art when Eleanor Tomlinson wed strapping rugby player Will Owen.

The actress, 30, and the 27-year-old sportsman each shared photographs on Instagram, showing the couple celebrating with a kiss and a glass of fizz.

For the ceremony at Euridge Manor in the Cotswolds, Miss Tomlinson wore a strapless white dress by Spanish bridal brand Pronovias, with a long white train and oversized sleeves, and diamond jewellery from De Beers.

Owen, who has just left Coventry rugby club, told his followers it was ‘the happiest day of my life’.

Miss Tomlinson, who rose to fame in the hit BBC1 drama series Poldark opposite Aidan Turner, wrote: ‘When a Miss becomes a Mrs. I love you.’ 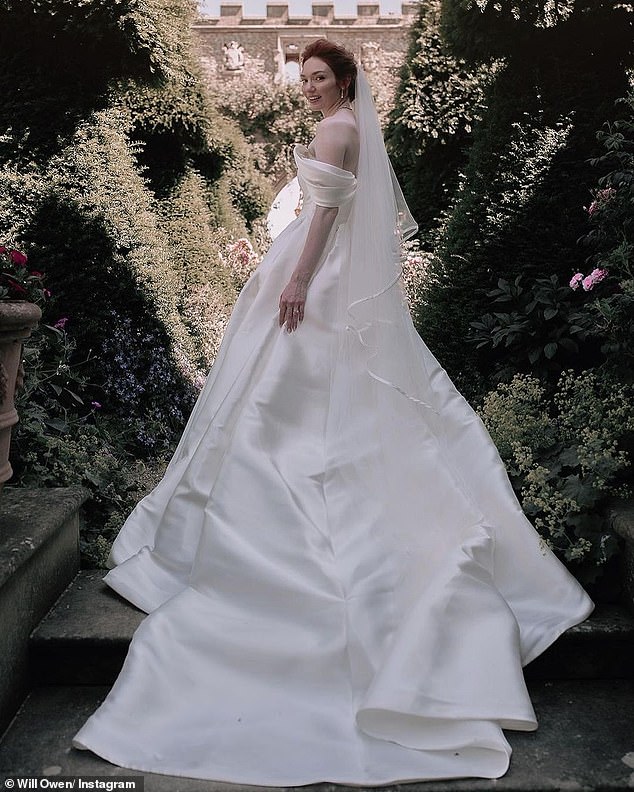 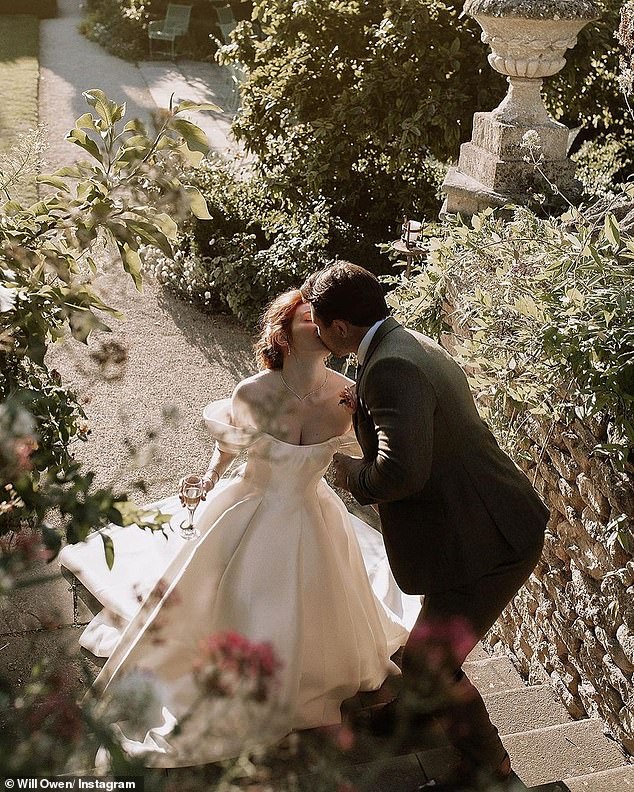 Speaking about her dress to Harper’s Bazaar magazine, Tomlinson said: ‘There wasn’t even room for my dad to sit next to me in the car – he had to sit in the front! I have never felt so confident though. So happy. So loved. And so ready to walk down that aisle.

‘The first dress I tried on was the one. I looked at my brother and he burst into tears and I just knew I’d found my dream dress and then some.

‘I still tried on pretty much every other dress in the shop because why not?

‘But I knew nothing could beat the dress I’d already found.’ 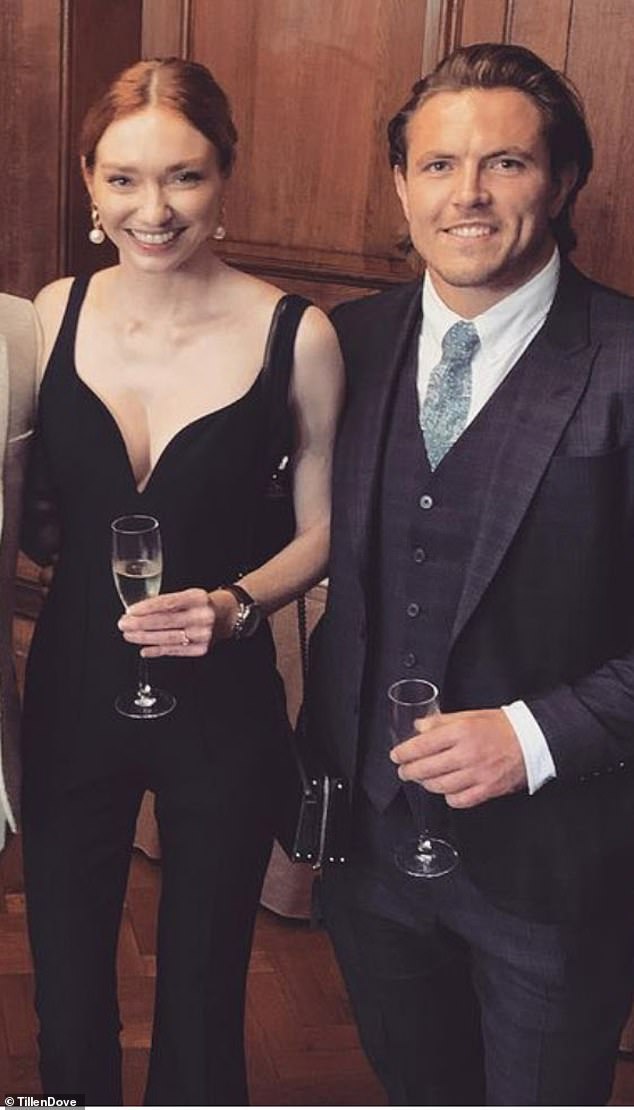 Tomlinson said bride-to-be should include their friends and family in choosing the dress because ‘that is where the magic really begins’.

The Angus, Thongs And Perfect Snogging star said she had always been ‘obsessed’ with American actress Grace Kelly’s wedding dress and had planned on wearing a slinky sleek number but changed her mind after choosing the venue.

She said: ‘It is one of the most beautiful places I’ve ever been to. Once I’d seen the aisle, the setting, the different areas in which moments of our big day would be playing out, I was able to envision the dress in the surroundings.’

Tomlinson said her wedding planner was her brother’s fiance, adding: ‘We wouldn’t have had the slightest clue where to even begin with any of it without him.’ 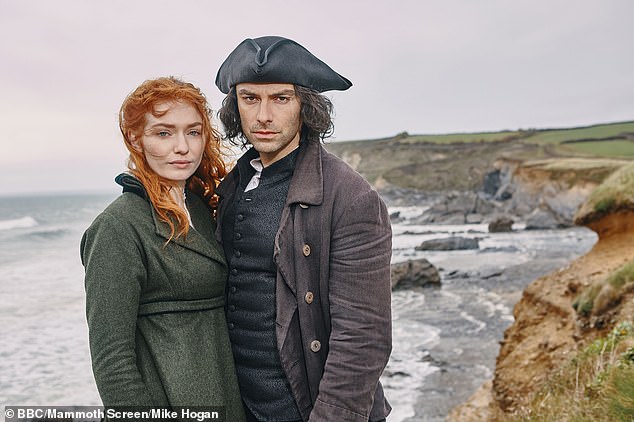 Iconic: Eleanor previously appeared on the West Country drama Poldark as the flame-haired beauty Demelza, alongside Aidan Turner as the titular Captain 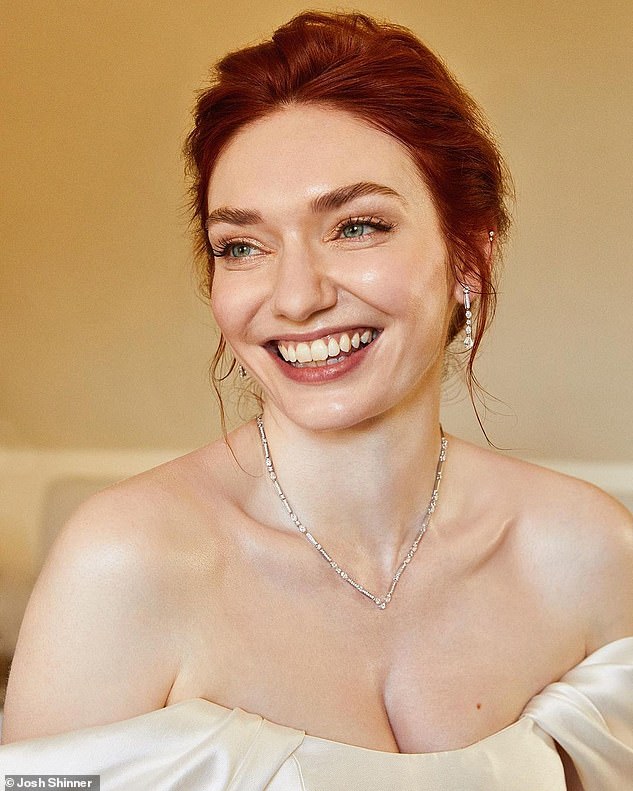 She continued: ‘He was incredible – he even led the ceremony as I wanted it to be a friend, someone I love, standing up there with Will and I.’

The War Of The Worlds actress said she had been most worried to find the perfect jewellery but ‘felt like a queen’ in the matching diamond necklace, earrings and bracelet she picked out.

Speaking about her big day, she added: ‘I think having some experience of red carpets and the world of fashion did help my nerves, certainly.

‘Although, saying that, when you first arrive at the aisle and you look out and see the faces of friends and family that you love looking back at you, it all goes out the window and the bottom lip starts to tremble… and then, boy, do those happy tears come.’