Round two in the leadership debates – and was anyone watching?

My sense is possibly not, since 7pm on one of the sunniest evenings of the year is generally when people tend to be barbecuing sausages and drinking beer, not watching five Tory MPs arguing in a sweltering studio.

Still, here we were, and here they were, primed and ready to go. Julie Etchingham presiding, a much less egotistical and ultimately more constructive host than Channel 4’s Krishnan Guru-Murthy, who seemed more concerned with showing the world how clever he was than getting the best out of the candidates.

Etchingham’s approach was rather more congenial, and ultimately more productive. This time it was Liz brightening up the studio, in scarlet – perhaps a gentle nod to her socialist roots, which she later referenced. Penny, by contrast, was demonstrating her true blue credentials by wearing a blue satin shirt that didn’t quite deliver under the spotlight. The others were more businesslike: No nonsense dressing for a no-nonsense debate. 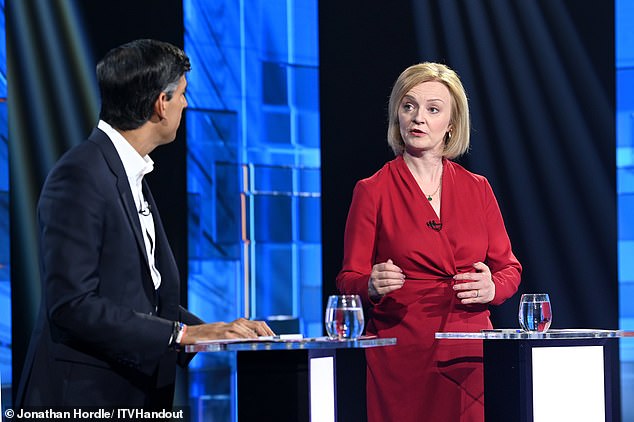 Unlike Channel 4, there was no hostile live audience, and no opportunities for the candidates to engage and win over individuals. This played slightly to Tom Tugendhat’s disadvantage, since he had been the one last time who had garnered the most applause. But if they thought they were going to avoid the mudslinging, they were wrong. After a round of general questions, the candidates were forced to turn on each other, as Etchingham asked each one to challenge a rival on a specific policy point. A pretty ruthless tactic on the part of ITV, but it did nevertheless spark the debate into life.

Rishi took the brunt of this. Why hadn’t he listened to worries from within his team about Covid fraud, asked Kemi Badenoch; did he think we should still be doing business with China, Liz Truss wanted to know? Poor man, one almost felt sorry for him. Almost.

Elsewhere, Liz put in a much better performance than last time. She seemed much more animated, much more engaged, even though her finger jabbing sometimes felt a little over-zealous.

The trouble with Truss is that although much of what she says makes a lot of sense, and many of her assertions – about the economy, about her record in office – are valid, she just speaks in this rather odd staccato monotone which somehow makes it hard to follow what she’s saying.

This was something she later acknowledged, admitting that she was ‘not the slickest presenter’, but that – with much frantic gesticulating – she got things done.

This was her mantra throughout and she stuck doggedly to it. Badenoch too remained closely on-brand, pushing the pragmatic politician line. When she was at the Treasury, she said, in response to a question about immediate help for the cost of living crisis, there were never any easy options, just ‘difficult option a, terrible option b, mad option c’.

There was quite a bit of flair there, and she seemed more relaxed and confident than last time, perhaps emboldened by recent positive polling. Her replies also came across as natural rather than over-rehearsed, a positive improvement.

Mordaunt, by contrast, seemed a little baity. She referred several times to her general brilliance, and said this was the reason so many people were briefing against her. She would unite a government of all the talents, she explained, somewhat testily, adding that one of her selling points was the quality of her team. A team that, if reports are right, would put David Davis as home secretary and Andrea Leadsom as chancellor.

In answer to the question ‘who would have Boris Johnson in their Cabinet’, not one candidate put their hand up. Given that, with the exception of Tugendhat, none of them would be where they are today without his patronage, that seemed quite harsh. How quickly people forget in politics. Badenoch stood up for him: He delivered on Brexit and the vaccines, and stood up to Putin. When Tugendhat scoffed, she flashed her mettle: Talking is easy – what did he know about taking tough decisions?

Interestingly, Rishi was at his best on a personal question: Defending the attacks on his wife’s money. He was proud of his parents-in-law, he explained, who had started their business from nothing and built all their wealth from scratch. That, he added, was something that as a Conservative he fully supported. It added a nice human dimension to someone who can often seem out of touch.

All in all, as with the first debate, no clear winner. Rishi stood his ground, Truss made headway, Kemi grew in confidence and Mordaunt just seemed awfully cross with everyone. As for Tugendhat, without the live audience interaction and the opportunity to flash that charm, he seemed a little flat.

The final question was this: If you win the leadership, will you seek a fresh mandate and call a general election? A resounding no from all present. At least Brenda from Bristol will be happy.