No James Bond this time, but we did have an Aston Martin. And standing in for the Queen, there was the Prince of Wales – the owner of said car – stealing the show as the 2022 Commonwealth Games burst into life in Birmingham tonight.

Ten years (almost to the day) from that magical, if occasionally baffling, opening night at London’s Olympic Stadium, led by Her Majesty and 007, it was the turn of Britain’s Second City – and sport’s second-biggest Games – to shine.

And so we had a cast of thousands, synchronised dancing, giant puppets, celebrities (including Brum creation Duran Duran, and Dudley-born Sir Lenny Henry), pyrotechnics, much talk of dreams and of being ‘on a journey’ long before we caught our first glimpse of the athletes.

Of course this was all on a different scale to London 2012 – Brum has soaked up £780million of public money for this fortnight of sport versus the £9.3billion spent on the Olympics. But it was slick, properly spectacular and full of the same originality, quirk and good-humoured enthusiasm which Danny Boyle brought to bear a decade before. 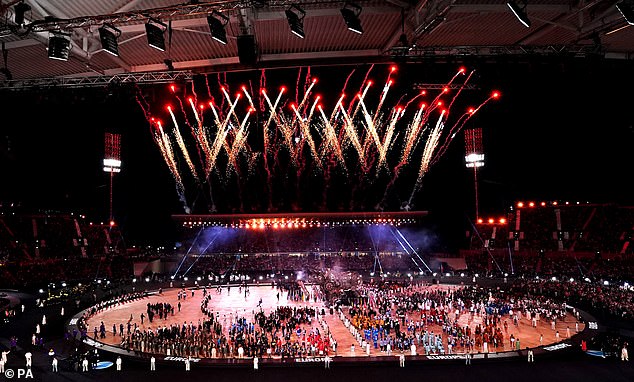 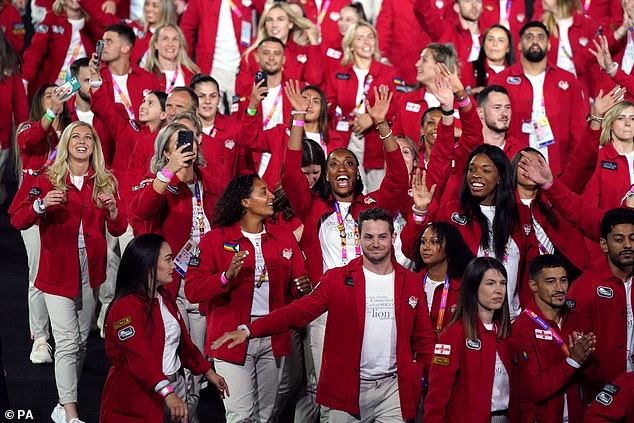 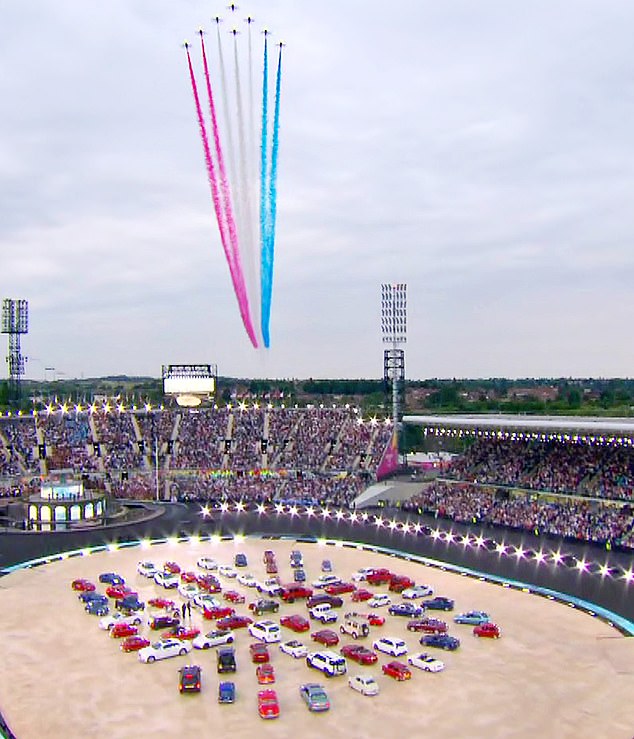 A jet-set start: The Red Arrows fly over a Union Jack of locally made cars at the Commonwealth Games 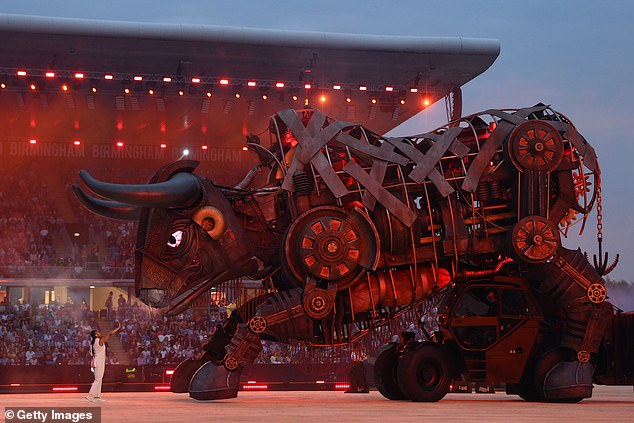 In the ring: The 50ft mechanical bull parades around the main stadium

Thus it was that we were treated to a giant 50ft mechanical bull charging around the main stadium. This was not some profound metaphor drawn from sporting antiquity. It was a nod to Birmingham’s famous shopping centre, the Bull Ring.

They had also built a chunk of canal around a stage inside the stadium, a reminder of Brum’s Venetian qualities.

After all, the whole ceremony was produced by Steven Knight, the same chap who created Peaky Blinders, another great Brum export not known for its subtlety.

In among all the usual mandatory themes of unity, peace, love and saving the planet, there was no dodging the monster which put this place on the map: Industry. And the grimy, exhaust-spewing car industry to be precise.

There were huge roars of West Midlands approval for the arrival of 72 cars – one for each competing nation – in red, white and blue. All built in Brum or hereabouts, all driven by locals, they formed a giant Union Flag. In pride of place was a good old-fashioned Land Rover carrying mezzo-soprano Samantha Oxborough, who delivered a belting national anthem – two verses, to boot, accompanied by the City of Birmingham Symphony Orchestra, a splendid choir and, bang on cue, the Red Arrows. 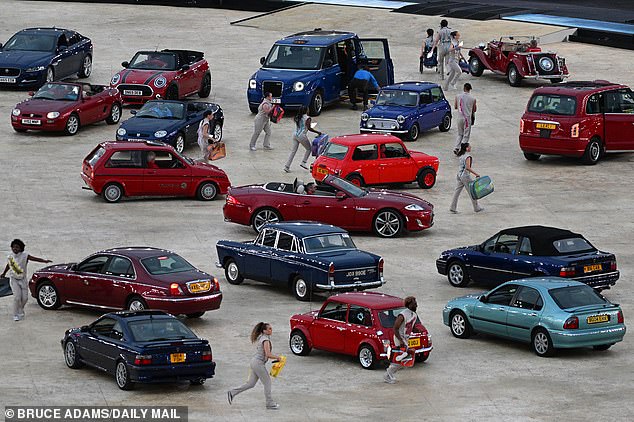 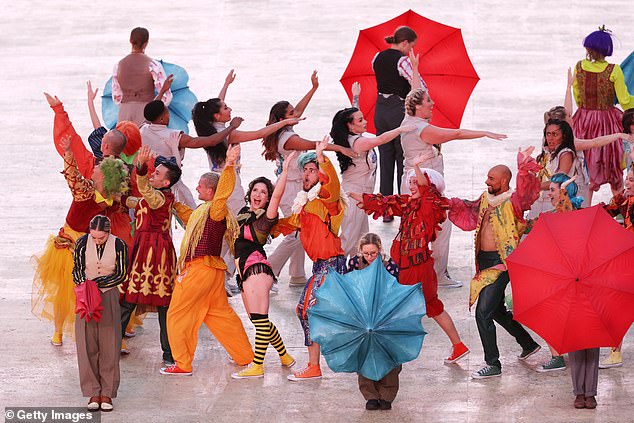 On the back of the Land Rover was the numberplate: HRH PP. This was a homage to the late Prince Philip who famously went to his maker last year aboard a very similar vehicle.

Watching it all on telly up at Balmoral, it is safe to say that the Queen must have been delighted.

Though absent from the proceedings, her enduring influence on this organisation was a recurring sight on the giant video screens.

Her famous 21st birthday pledge to serve for ‘the whole of my life’ was played out, along with scenes from many of her bygone Commonwealth tours and also her recent Jubilee.

And then in came the Prince of Wales, accompanied by the Duchess of Cornwall, driving his West Midlands-built Aston Martin. His was almost certainly the only vehicle on parade running on bioethanol derived from cheese and wine extracts.

Charles also caused the site’s security team some mirth when he opted to step through the metal detector archway – setting it off, before smiling and raising both hands apologetically.

There followed a gleefully irreverent homage to the great geniuses of the region – William Shakespeare, Josiah Wedgwood and the rest – as depicted through a collection of grotesque puppets. Poor Sir Edward Elgar appeared to be spewing out a mouthful of spaghetti (trombones on closer inspection). 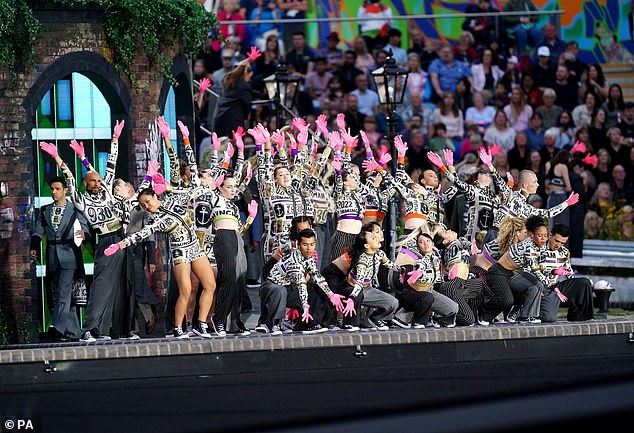 Performers during the opening ceremony of the Birmingham 2022 Commonwealth Games

That great man of letters, Dr Johnson, was a giant green slug, a dead ringer for Jabba The Hutt from Star Wars rather than the creator of the English dictionary. Humour and quirkiness suddenly gave way to an emotionally charged surprise appearance which rather underlined the whole point of the Commonwealth and its Games.

Here was Malala Yousafzai, the Pakistani schoolgirl and teenage activist who was shot by the Taliban in 2012, won the 2014 Nobel Peace Prize and has since rebuilt her life in Birmingham.

She paid tribute to everyone from her teachers to the people who had ‘taught my mother English and my brothers to drive’.

Once something of a nostalgia fest, the Commonwealth Games must now navigate the culture wars and the warriors of wokery.

It has not been easy in recent weeks. There have been those, notably on the Left, who argue that this is an outdated colonial throwback for which Britain should apologise on bended knee.

The same people, however, have demanded that Britain should also wield a big stick and reprimand those member states (many of them among the poorer nations) which criminalise homosexuality.

Yet there is much to celebrate here in Birmingham over the next fortnight: A multi-sport event spanning a third of the Earth’s population.

It is also one in which all the component parts of the United Kingdom compete in their own name – be it Scotland, Wales, Guernsey or dependent territories such as the Cayman Islands.

There are Olympic giants. And then there is the Cook Islands Lawn Bowls team featuring the Jim family – Mum, Dad and their two daughters. Not for nothing is this event known as the ‘Friendly Games’.

In the words of the Queen, recited by the Prince of Wales last night: ‘They remind us of our connection with one another, wherever we may be in the world, as part of the Commonwealth family of nations.’