The economy SHRANK 0.1% between April and June as fears over the cost-of-living see families tighten their belts

Contents hide
I. The economy SHRANK 0.1% between April and June as fears over the cost-of-living see families tighten their belts
I.I. Share or comment on this article:
I.II. Give This Article A Share:

The UK economy shrank in the spring as Covid and household gloom over the cost-of-living hit growth, new figures revealed today.

Official statistics showed that GDP fell by 0.1 per cent in the three months April to June, despite rising 0.8 per cent in first quarter of the year.

The Office for National Statistics said output was affected by a fall in Covid spending on healthcare and signs that households were tightening their belts amid rising bills.

Energy costs could hit £5,000 a year for the average family by January and the Bank of England warned last week of a recession later this year and inflation hitting 13 per cent.

GDP remains 0.6 per cent above its pre-coronavirus level in the final quarter of 2019 and 2.9 per cent higher than the second quarter of 2021, when the UK was emerging from lockdown.

ONS director of economic statistics Darren Morgan said: ‘Health was the biggest reason the economy contracted as both the test and trace and vaccine programmes were wound down, while many retailers also had a tough quarter.

‘These were partially offset by growth in hotels, bars, hairdressers and outdoor events across the quarter, partly as a result of people celebrating the Platinum Jubilee.’ 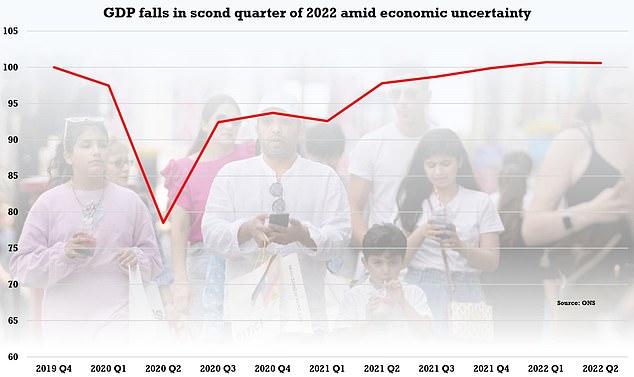 The UK economy contracted by 0.1 per cent between April and June, compared to growth of 0.8 per cent in the previous three months, the Office for National Statistics said today. 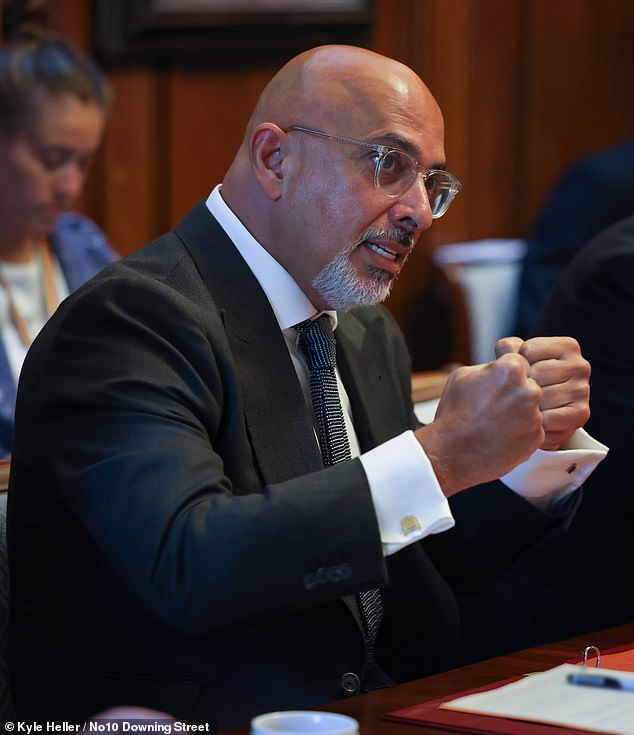 Chancellor Nadhim Zahawi said: ‘Our economy showed incredible resilience following the pandemic and I am confident we can pull through these global challenges again.

Chancellor Nadhim Zahawi said: ‘Our economy showed incredible resilience following the pandemic and I am confident we can pull through these global challenges again.

‘I know that times are tough and people will be concerned about rising prices and slowing growth, and that’s why I’m determined to work with the Bank of England to get inflation under control and grow the economy.

‘The Government is providing billions of pounds of help for households with rising costs, including £1200 for eight million of the most vulnerable households.’

The service sector was particularly badly hit, falling by 0.4 per cent over the quarter, ONS experts said.

A large part of this was in health and social work, and came as less money was spent on the fight against Covid-19.

GDP fell 0.6 per cent in June – a fall blamed on the bank holidays for the Queen’ Platinum Jubuilee, and the ONS revised its May estimate from growth of 0.5 per cent to just 0.4 per cent.