A mysterious fiery red glow photographed by a pilot as he passed over clouds above the Atlantic Ocean have sparked comparisons with a ‘watergate’ – an underwater portal to the nightmarish parallel universe, the Upside Down – in Netflix’s hit show Stranger Things.

The three eerie images, taken on July 22, were posted to Reddit with the hopes of unraveling the mystery and included a note saying the pilot ‘says he’s never seen anything like it’.

There, they spawned a frenzy of theories and comments ranging from comparisons to scenes from the latest series of Netflix’s hit show Stranger Things, to others that suggested it was most likely a fishing boat using large panels of red LED lights to attract schools of saury fish.

However, without closer inspection, the cause cannot be known for certain. So far the pilot has remained anonymous and there is no indication of how low he was flying or where over the Atlantic he saw the mysterious scene.

Scroll down for video 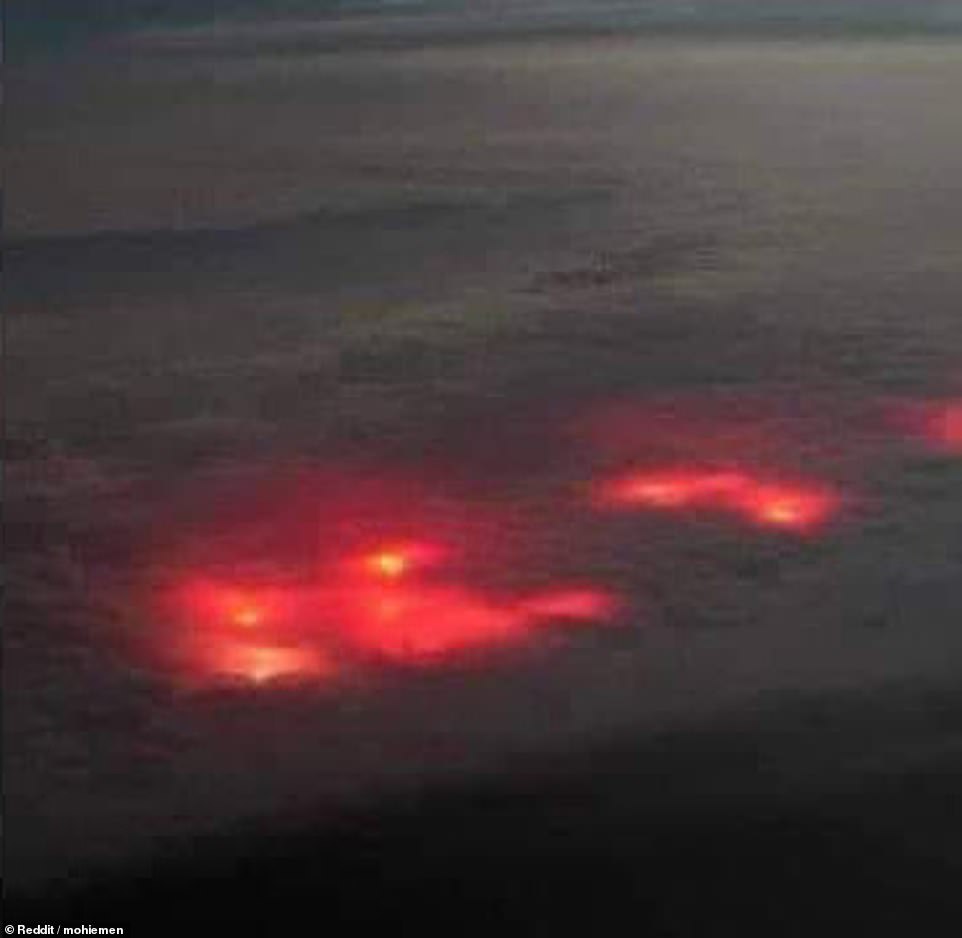 Stranger Things: Pictured is an image snapped by the pilot on July 22. He said this is something he has never seen before 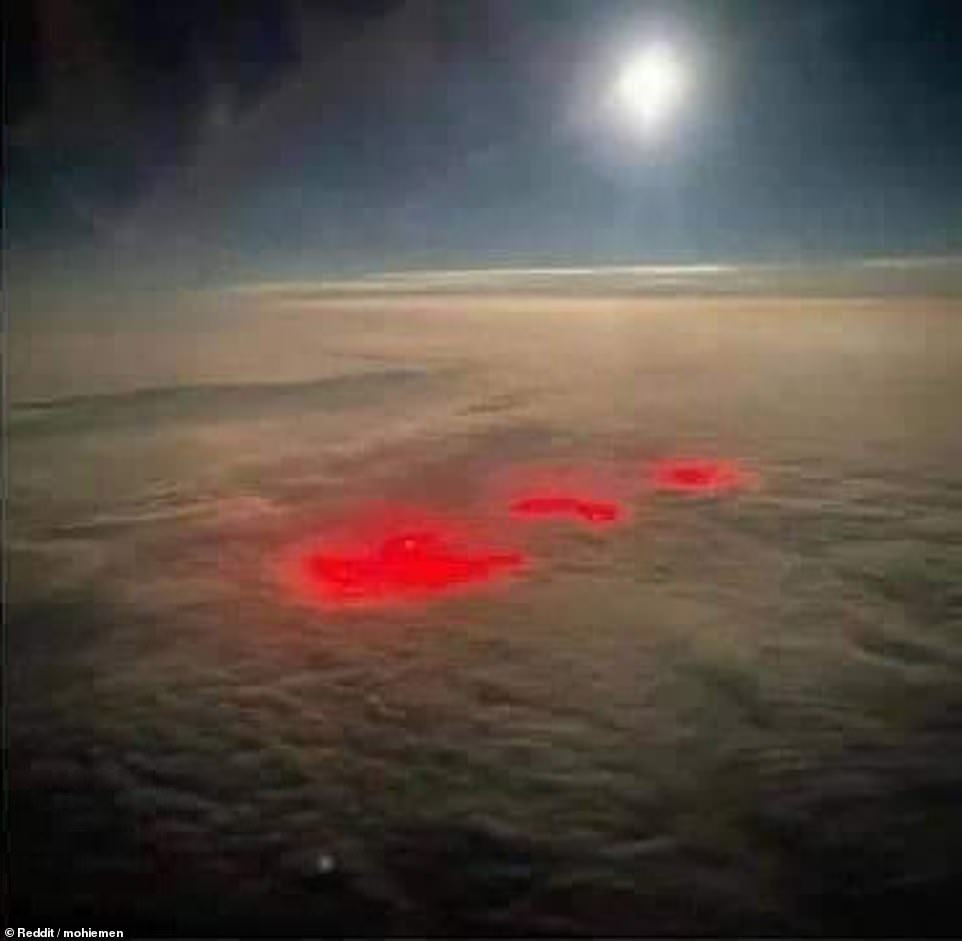 The pilot was flying over the Atlantic Ocean when he saw the glow. Although many have speculations, the cause cannot be confirmed

Saury fishing uses hundreds of massive LED lights on fishing boats’ perimeters to attract fish, allowing them to be easily scooped up in nets. It is most often seen in the Pacific Ocean but the Atlantic saury is found from the Gulf of Saint Lawrence, Canada to Bermuda.

Although LED is the preferred option for fishing boats, due to its its higher efficiency and lower weight, the fishing boat below could be using another lighting solution like high-intensity discharge (HID). Its intense glow through the clouds suggests use of HID which would explain the volume of light escaping upwards in the photos.

However, Redditors made the most of the opportunity to suggest theories ranging from the end of times to aliens. Among the most popular was the Stranger Things comparison where, in season four, a portal opens in Hawkins’s Lovers Lake.

One Redditor wrote: ‘Dustin’s trying to open up a portal to the upside down – it is literally a watergate,’ referring to one of the scenes.

Another pilot had a similar encounter in 2014, when he and his co-pilot flew over glowing clouds south of the Russian peninsula Kamchatka during the flight of a Boeing 747-8 from Hong Kong to Anchorage, Alaska.

Dutch pilot JPC van Heijst explained on PBase how, five hours into the ten-hour flight, they spotted an intense flash of light like a lightning bolt, directed vertically up in the distance.

This was then followed by a deep red and orange glow 20 minutes later.

And the experience left van Heijst somewhat perturbed, owing to the lack of an explanation for what happened.

There were no thunderstorms on their route or weather-radar, suggesting the lightning did not originate in a storm.

The glow was also a mystery; similar lights have been spotted from squid-fishing-boats, but van Heijst says this ‘would not make sense in this area.’

‘The closer we got, the more intense the glow became, illuminating the clouds and sky below us in a scary orange glow, in a part of the world where there was supposed to be nothing but water,’ he continued.

‘The only cause of this red glow that we could think of was the explosion of a huge volcano just underneath the surface of the ocean, about 30 minutes before we overflew that exact position.’

Van Heijst was then nervous about encountering an ash-plume in the middle of the night, but fortunately they did not encounter anything of the sort.

Before the flight they had heard via radio about earthquakes in Iceland, Chile and San Francisco.

But despite their being a few volcanoes on their route, they had had not been alerted to any new activity – although this doesn’t necessarily include unseen underwater volcanoes. 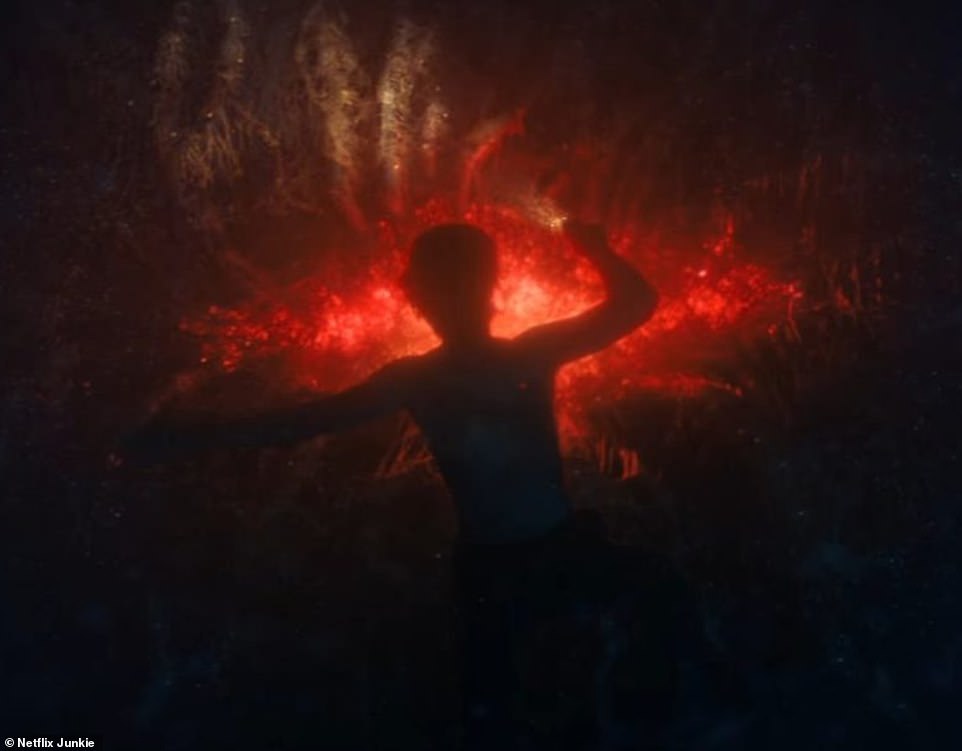 Some users said the incident has to mean the end of time, while other users compared it to the Netflix series Stranger Things (pictured) 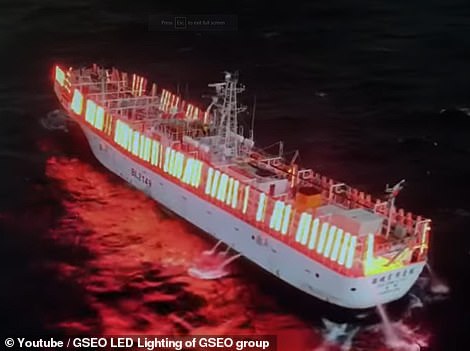 While many of the comments about what the red glow could be were outrageous, one suggested it could be large fishing boat using red lights to attract saury fish