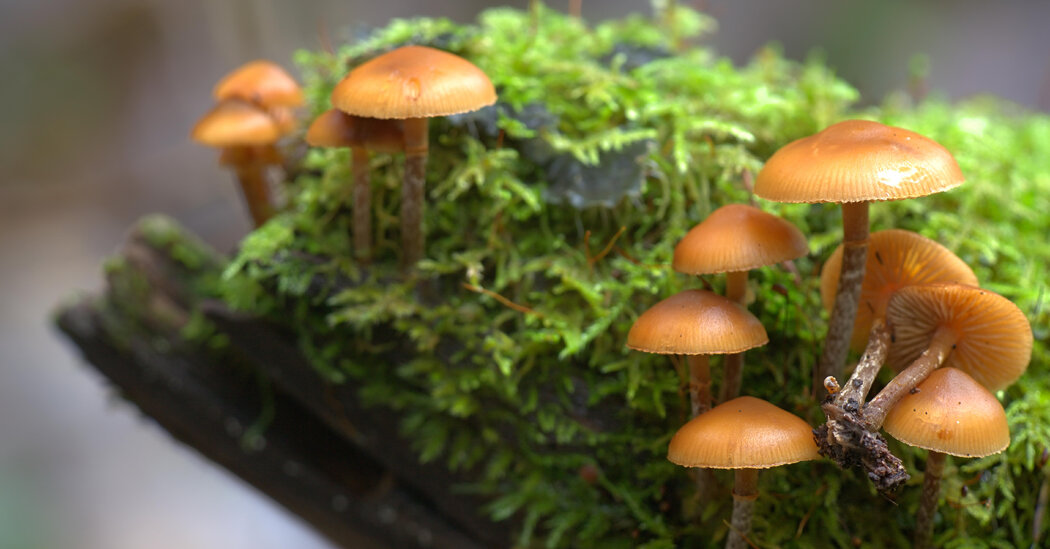 
Three mushrooms known as the destroying angel, the deadly dapperling and the funeral bell all have something in common: the fabulously lethal toxin alpha-Amanitin. If you eat one of these mushrooms, symptoms may not appear for several hours. But soon enough, the toxin begins wreaking havoc on your body’s ability to transcribe genes. By the fourth day or so after consumption, your liver and kidneys begin to fail. After about a week, you may well die.

This uncanny deadliness has a mystery at its core: These mushrooms are from three separate genuses, or groups of fungal species, that are not closely related. How did they come to make the exact same toxin?

In a paper published in the Proceedings of the National Academy of Sciences on Monday, scientists who have sequenced genomes of 15 species of mushrooms from these three groups make an intriguing claim: The genes to make alpha-Amanitin, rather than being inherited from a shared ancestor of these groups, were transferred to them directly from an unknown, probably extinct mushroom.

This kind of gene transfer, called horizontal gene transfer, is common among bacteria, said Hong Luo, a researcher at the Kunming Institute of Botany in China and an author of the new paper. Little snippets of DNA are passed from one microbe to another, then passed on to their offspring. However, mounting evidence suggests that somehow, genes can move among complex, multicellular creatures as well, perhaps with help from pathogens. In April, another group of scientists reported that genes had moved between snakes and frogs living in the same forest habitat by hitching a ride on shared parasites. It sounds outlandish, but it might help explain some otherwise baffling observations in the tree of life.

The team behind the fungi paper already suspected horizontal gene transfer had created the identical toxins in these mushrooms. There were some surprises, however, as they completed their research. They had expected that their glimpses into the mushrooms’ genetics would confirm that one of the groups had given the genes to the others. Instead, the gene toxin clusters all seemed equidistant from their origin.

Talking it over, the paper’s authors decided that the simplest explanation was that horizontal gene transfer had occurred — but not necessarily among these three groups.

“That’s when we started to consider, there had to be another, possibly extinct species,” said Francis Martin, a scientist at the French National Research Institute for Agriculture, Food and Environment and an author of the paper.

This long-ago mushroom would have possessed the genetic tool kit for making the toxin and passed it on, by means still unknown, to the still living varieties. The affected mushrooms are not its descendants — merely the bearers of a small package of its genes, released like a message in a bottle, that gives the fungi their extraordinarily poisonous powers.

Scientists may never know much about this proposed donor for the toxin genes, if it existed. But the researchers are curious about why these three groups, of all mushrooms, received and made use of its legacy. Are the toxins playing a special role in these particular mushrooms’ ecologies? Or are the mushrooms just particularly good at whatever mysterious techniques bring genes from the environment into their own genomes?

As scientists learn more about how horizontal gene transfer works beyond bacteria, perhaps some of these answers will grow clearer.