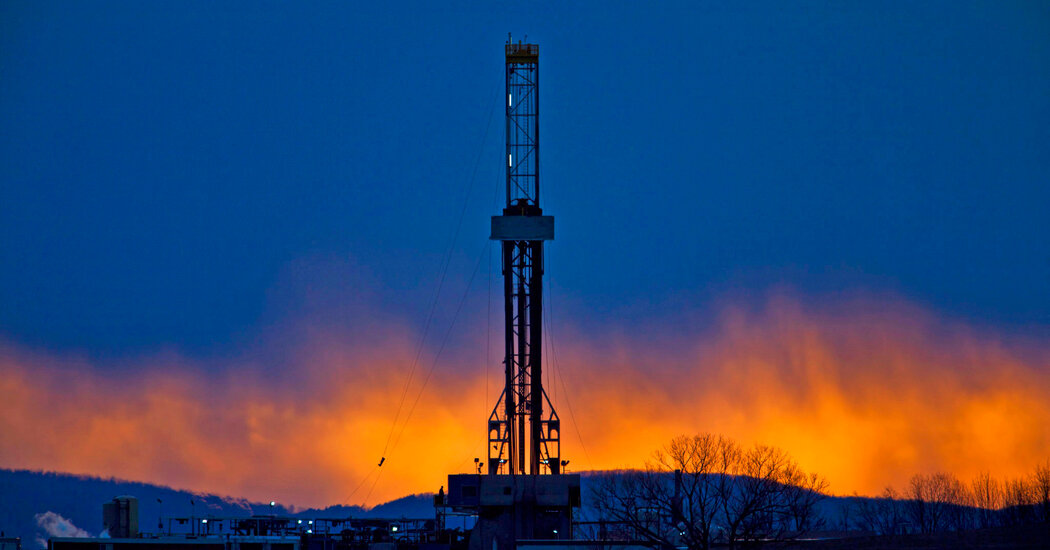 Italy Says Ancient Statue in U.S. Museum Was Stolen, Not Lost at Sea


Thanks to a remarkable oil and gas boom, the United States has achieved the long-sought goal of energy self-sufficiency: We now produce more oil and refined products, natural gas and coal than we consume. In particular, horizontal drilling and hydraulic fracturing — fracking — transformed the United States from the world’s largest oil importer to a net exporter of both oil and gas.

This kind of physical energy security is a blessing when conflict disrupts the global energy trade. Europe’s frantic dash to free itself of Russian energy illustrates how deeply problematic it can be to not have it.

Yet look at prices at the pump, and you’ll see why we can’t drill our way to true energy security. That’s why the Senate must finalize legislation now that will marshal the full might of America’s energy arsenal to defeat Vladimir Putin, reduce energy costs, secure our economy against the next energy crisis and confront the critical threat of climate change.

Oil, coal and, increasingly, natural gas are globally traded commodities, which leaves the U.S. economy dangerously exposed to the vagaries and volatility of energy prices. The decisions of a single autocrat on the other side of the world can send the cost of filling the tank in Des Moines or Denver soaring. Every $10 per barrel increase in the price of oil is a nearly $200 million per day tax on American households and businesses, and soaring energy costs are a primary driver of inflation, threatening to topple the U.S. economy back into recession.

These threats to America’s economic security will persist as long as our households, businesses and industry remain dependent on fossil fuels. Only by reducing our use of oil and gas can we insulate America’s economy from fossil fuel price shocks.

Prices at the pump today are at their highest levels since 2008. Back then, the United States imported over half of our oil and U.S. natural gas production had just begun to climb out of a four-decade-long plateau. Wind and solar power were expensive, supplied less than 2 percent of U.S. electricity and could not, it seemed, scale to meet the moment. And just 100 of Tesla’s original Roadsters had rolled off production lines.

In that context, it is almost understandable to think even more drilling is America’s only path to energy security. But in the ensuing years, the energy landscape fundamentally changed. Even as oil and gas production boomed, supportive public policies at home and across the world scaled up wind and solar power, driving down costs by 72 percent for wind and 90 percent for solar since 2009. These once-costly alternative energy technologies are now the cheapest and fastest growing sources of electricity available today.

Lithium-ion battery costs have also plummeted as fast as solar, and all major automakers are now racing to bring affordable, mass-market electric vehicles to every consumer segment, including perennially popular pickup trucks and S.U.V.s.

It is true that to aid our European allies (including Ukraine), cut off Russia’s biggest source of foreign currency and starve the Kremlin’s war effort, the United States must export as much liquefied natural gas, oil and coal as we can muster. Yet that’s only the start of a new approach to energy security. Congress must also enact a bold investment package to grow renewable electricity, preserve existing nuclear plants, catalyze new hydrogen, carbon capture and advanced nuclear industries, help American households and businesses adopt electric vehicles and efficient electric heating and increase energy productivity in American industries.

The House of Representatives has already passed such an energy investment package as part of the Build Back Better Act, but it has stalled in the Senate. The REPEAT Project, which I lead, has modeled the energy provisions in that bill. If enacted, we estimate that by 2028, U.S. oil consumption could fall by nearly 500 million barrels per year and natural gas consumption could decline by two trillion cubic feet. At current energy prices, that’s roughly $70 billion in annual savings for American homes and businesses, making the U.S. economy far more energy secure.

We also find these investments in energy security would put the United States within easy reach of the nation’s commitment to cut climate-warming greenhouse gas emissions to 50 percent of peak levels by 2030, confronting another urgent threat to national and global security.

Senator Joe Manchin of West Virginia has been a key holdout on the energy package in the Build Back Better Act passed by the House, but he also seems to recognize that Mr. Putin’s assault on Ukraine changes the context for energy legislation. “This is, in many ways, an energy war,” Mr. Manchin aptly stated as the conflict began, and he’s since convened talks to try to hammer out a deal to address “our nation’s climate and energy security needs head on,” according to a spokesman. But with summer recess on the horizon and midterm campaigning ramping up, the sands are running out of the hourglass for Congress to act. The only viable strategy is to simultaneously increase domestic fossil fuel production while driving down oil and gas use at home through investment in clean energy, efficiency and electrification. That strategy would allow the United States to surge exports to our allies abroad much faster than a “drill, baby drill” approach alone. In fact, the REPEAT Project estimates that by 2028, this strategy could increase U.S. exports enough (relative to 2021 levels) to completely replace the oil and natural gas Russia supplies to Europe. Boosting production and decreasing demand will also open a second front to drive down global energy prices that focusing on the supply side only would not.

Hand in hand with tax credits for carbon capture and storage and new efforts to eliminate wasteful and polluting methane leaks in the oil and gas supply chain — two measures Mr. Manchin supports — the United States can ensure our energy exports are the cleanest in the world, a critical step to remain globally competitive in a carbon-concerned world.

Finally, tax credits and loans for advanced energy manufacturing and production of critical components and materials can secure the supply of technologies that will be the foundation of energy security in the 21st century.

Presented with yet another energy crisis, we cannot afford to ignore America’s persistent economic vulnerability. It’s time to do whatever it takes to deliver true energy security for America’s economy, citizens and allies.