Home Tranding 🔥 To Keep Putin and His Oligarchs Afloat, It Takes a System 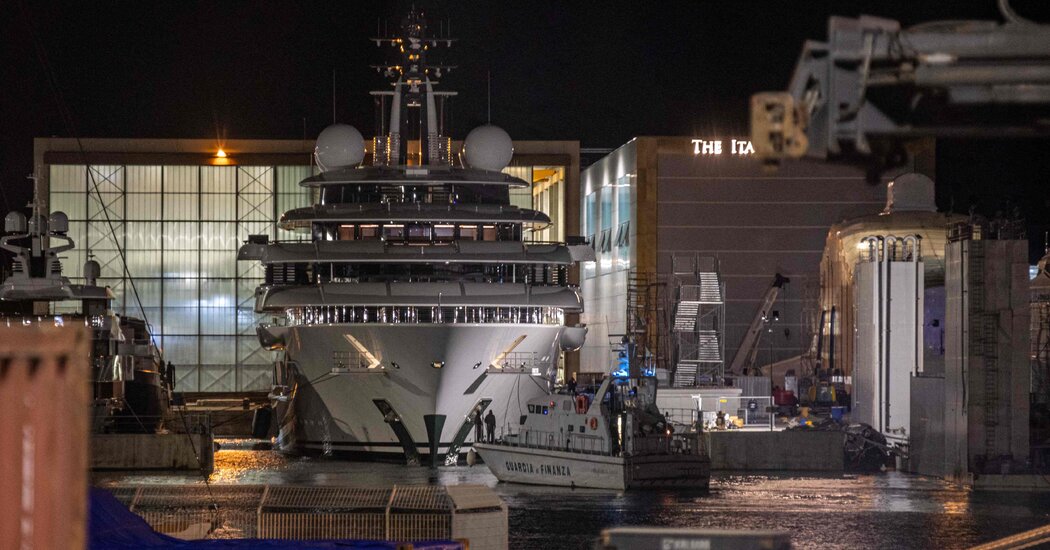 
A single arrest in a Tuscan port is rarely international news. But the Italian police’s decision to seize Scheherezade last Friday in Marina de Carrara was different.

For one thing, Scheherezade is not a person, but a 459-foot luxury superyacht. And for another, American officials say her true owner, through a haze of intermediaries, is likely to be President Vladimir V. Putin of Russia.

Police seizures of massive luxury yachts in European ports have become the most visible symbol of the West’s effort to crack down on Putin and his inner circle in response to Russia’s invasion of Ukraine.

But they are also particularly visible evidence of the Russian ruling class’s corruption. The Scheherezade has gold-plated bathroom fixtures, helicopter landing pads, and a dance floor that converts into a swimming pool — the latter of which conjures the unexpected question of whether Putin is a fan of the classic film “It’s a Wonderful Life.” All of which, needless to say, would be far beyond the scope of a government salary.

And so the glitzy boat is a usefully concrete reminder of what Russia experts have said for years: that it is impossible to understand Putin’s regime without understanding the corruption that has by turns created, fueled, shaped, constrained it. And that may, one day, prove to be its undoing.

Mapping the details of that corruption would be the work of a lifetime. But two simple insights can help you grasp the big picture. The first is true of systemic corruption wherever it occurs: It is not primarily a problem of individual immorality, but of a collective action trap. And the second is true of Russia: It got stuck in that trap as a result of its flawed, and ultimately incomplete, transition to democracy in the 1990s.

We tend to think of corruption as a failure of morality, when a greedy person decides to benefit by steering public resources toward private gain. But while that’s not exactly untrue, it misses the most important thing: namely, that corruption is a group activity. You need bribe-payers and bribe-takers, resource-diverters and resource-resellers, look-the-other-wayers and demand-a-share-of-the-takers.

When that kind of corrupt network behavior becomes widespread, it creates its own parallel system of rewards — and punishments.

“What is different with systemic corruption is that it’s the expected behavior,” said Anna Persson, a political scientist at the University of Gothenburg, Sweden, who studies corruption. “These expectations make it very difficult for all individuals, actually, to stand against corruption, because it’s very costly in all different ways to resist that kind of system.”

Those who refuse to participate in the parallel economy of favors and bribes get passed over for promotion, cut off from benefits, and frozen out of power. Meanwhile, those who are skilled at corruption rise through the ranks, gaining more authority, more resources to distribute to cronies, and more ability to punish anyone who poses a threat to them. The result is a system where power and wealth accrue to those willing to play the corruption game, and those who are not get left behind.

Corruption “serves as a regressive tax, it’s like Robin Hood in reverse,” Persson told me. “All the resources are moved to the top of the system, to the great cost of the majority of the population.”

The most obvious evidence of that corrupt dynamic in Russia is in the luxury properties and megayachts belonging to senior officials and their close associates. But the harm runs deeper, reaching into ordinary people’s lives and depriving them not just of the government services and goods that get diverted into private pockets, but often of their basic rights.

After an unprecedented outcry in the Russian media and abroad, he was released and charges were dropped. But the message was obvious: Those who try to break the culture of corruption risk losing their safety, freedom, or even lives.

Some democracy, but not enough

But why did corruption in Russia get that bad? The answer, and maybe a counterintuitive one, is in democratization.

Or rather, not quite enough of it, said Kelly McMann, a political scientist at Case Western Reserve University who studies corruption and is one of the managers of V-Dem, a long-running study about the nature and strength of democracy worldwide.

There was corruption in the Soviet Union. But after its dissolution in 1991, the sudden explosive growth of freedom of expression and freedom of association in Russia and the other former Soviet countries and satellites brought new opportunities, not just for political and economic development, but for crime and corruption.

Two countries inch closer to NATO. The foreign ministers from Sweden and Finland are poised to meet with their NATO counterparts to discuss the prospect of joining the alliance. In apparent retaliation, Russia halted exports of electricity to Finland after saying that a NATO expansion would pose a threat to its own national security.

A possible spoiler? A day after President Recep Tayyip Erdogan of Turkey suggested that he would be reluctant to welcome Finland and Sweden into NATO, a spokesman for the leader said the country was not trying to block the two nations’ potential membership in the alliance, but rather ensure that all members’ security concerns are considered.

On the ground. Russia’s military offensive in eastern Ukraine remains stalled, and the Ukrainians are on the offensive around the northeastern city of Kharkiv. Ukraine’s defense minister warned that the war had entered a “new, long phase” with “extremely tough weeks” ahead.

War crime case. The Ukrainian judicial authorities began a case against a Russian soldier accused of shooting a civilian. It is the first trial involving a suspected war crime by a Russian service member; the victim was a 62-year-old man on a bicycle in a village in Ukraine’s Sumy region.

“Freedoms of expression and association don’t only have to be used for good things, they can be used for illegal activities, too,” McMann said. “When people can more easily get together and talk, that enables them to actually plan corrupt activity.”

That wouldn’t have been so bad if democratization had also brought in checks on executive power, an independent judiciary to investigate and prosecute crimes. “In order to have capitalism have functioning markets, you also need to build institutions. You need banks that can provide credit, you need a strong legal system that will protect property.” McMann said.

But in Russia, the government heeded Western advisers’ urging to get the state out of the economy as much as possible in order to let free markets flourish. Institutions and constraints fell by the wayside. In that vacuum, the parallel structures of corruption flourished, crowding honest politicians out of government and honest businesses out of the market.

By the late 1990s, official corruption had flourished at every level of the government. In 1999, as President Boris Yeltsin’s presidency began to weaken, elites pressured him to leave office on their terms. If Yeltsin would anoint their handpicked successor, they would ensure that he and his family did not face prosecution for misappropriation of government funds.

How am I doing?

I’d love your feedback on this newsletter. Please email thoughts and suggestions to interpreter@nytimes.com. You can also follow me on Twitter.

Sign up here to get this newsletter in your inbox.